The Right Of Happiness 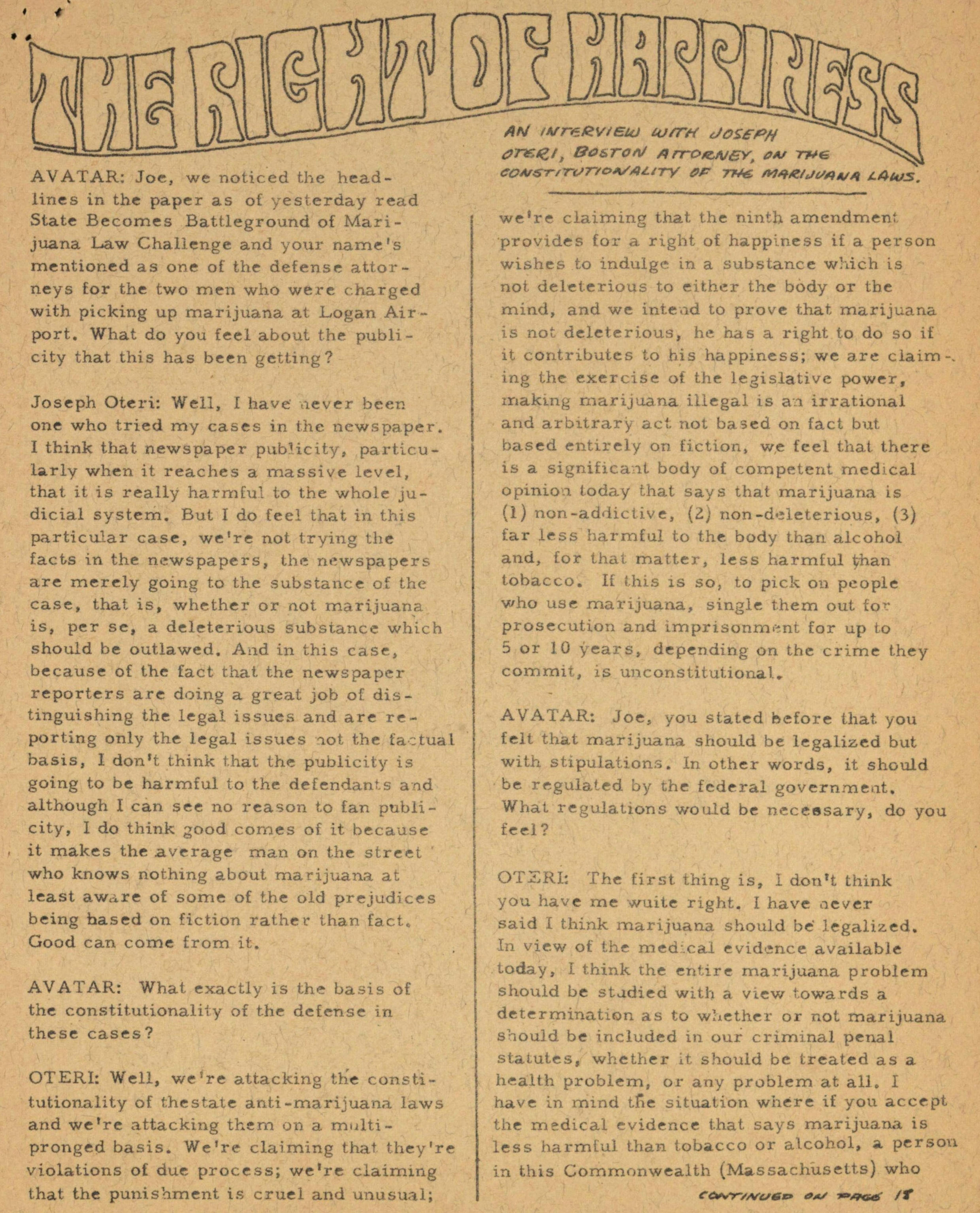 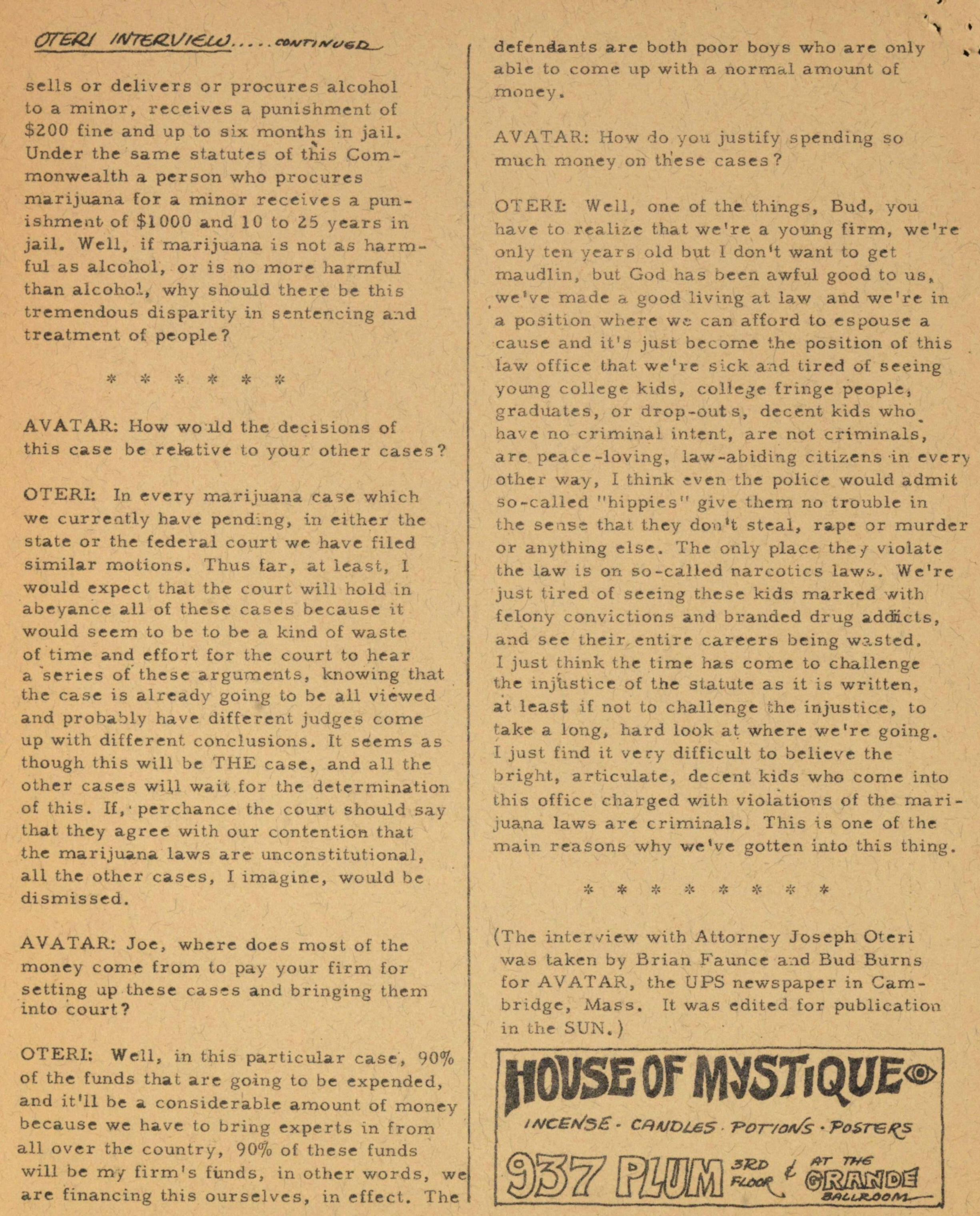 THE RIGHT OF HAPPINESS

An interview with Joseph Oteri, Boston attorney, on the constitutionality of the marijuana laws.

AVATAR: Joe, we noticed the headlines in the paper as of yesterday read State Becomes Battleground of Marijuana Law Challenge and your name's mentioned as one of the defense attorneys for the two men who were charged with picking up marijuana at Logan Airport. What do you feel about the publicity that this has been getting?

Joseph Oteri: Well, I have never been one who tried my cases in the newspaper. I think that newspaper publicity, particularly when it reaches a massive level, that it is really harmful to the whole judicial system. But I do feel that in this particular case, we're not trying the facts in the newspapers, the newspapers are merely going to the substance of the case, that is, whether or not marijuana is, per se, a deleterious substance which should be outlawed. And in this case, because of the fact that the newspaper reporters are doing a great job of distinguishing the legal issues and are reporting only the legal issues not the factual basis, I don't think that the publicity is going to be harmful to the defendants and although I can see no reason to fan publicity, I do think good comes of it because it makes the average man on the street who knows nothing about marijuana at least aware of some of the old prejudices being based on fiction rather than fact. Good can come from it.

AVATAR: What exactly is the basis of the constitutionality of the defense in these cases?

OTERI: Well, we're attacking the constitutionality of the state anti-marijuana laws and we're attacking them on a multipronged basis. We're claiming that they're violations of due process; we're claiming that the punishment is cruel and unusual; we're claiming that the ninth amendment provides for a right of happiness if a person wishes to indulge in a substance which is not deleterious to either the body or the mind, and we intend to prove that marijuana is not deleterious, he has a right to do so if it contributes to bis happiness; we are claiming the exercise of the legislative power, making marijuana illegal is an irrational and arbitrary act not based on fact but based entirely on fiction, we feel that there is a significant body of competent medical opinion, today that says that marijuana is (1) non-addictive, (2) non-deleterious, (3) far less harmful to the body than alcohol and, for that matter, less harmful than tobacco. If this is so, to pick on people who use marijuana, single them out for prosecution and imprisonment for up to 5 or 10 years, depending on the crime they commit, is unconstitutional.

AVATAR: Joe, you stated before that. you felt that marijuana should be legalized but with stipulations. In other words, it should be regulated by the federal government. What regulations would be necessary, do you feel?

OTERI: The first thing is, I don't think you have me wuite right. I have never said I think marijuana should be legalized. In view of the medical evidence available today, I think the entire marijuana problem should be studied with a view towards a determination as to whether or not marijuana should be included in our criminal penal statutes, whether it should be treated as a health problem, or any problem at all. I have in mind the situation where if you accept the medical evidence that says marijuana is less harmful than tobacco or alcohol, a person in this Commonwealth (Massachusetts) who sells or delivers or procures alcohol to a minor, receives a punishment of $200 fine and up to six months in jail. Under the same statutes of this Commonwealth a person who procures marijuana for a minor receives a punishment of $1000 and 10 to 25 years in jail. Well, if marijuana is not as harmful as alcohol, or is no more harmful than alcohol, why should there be this tremendous disparity in sentencing and treatment of people?

AVATAR: How would the decisions of this case be relative to your other cases?

OTERI: In every marijuana case which we currently have pending, in either the state or the federal court we have filed similar motions. Thus far, at least, I would expect that the court will hold in abeyance all of these cases because it would seem to be to be a kind of waste of time and effort for the court to hear a series of these arguments, knowing that the case is already going to be all viewed and probably have different judges come up with different conclusions. It seems as though this will be THE case, and all the other cases will wait for the determination of this. If, perchance the court should say that they agree with our contention that the marijuana laws are unconstitutional, all the other cases, I imagine, would be dismissed.

AVATAR: Joe, where does most of the money come from to pay your firm for setting up these cases and bringing them into court?

OTERI: Well, in this particular case, 90% of the funds that are going to be expended, and it'll be a considerable amount of money because we have to bring experts in from all over the country, 90% of these funds will be my firm's funds, in other words, we are financing this ourselves, in effect. The defendants are both poor boys who are only able to come up with a normal amount of money.

AVATAR: How do you justify spending so much money on these cases?

OTERI: Well, one of the things, Bud, you have to realize that we're a young firm, we're only ten years old but I don't want to get maudlin, but God has been awful good to us, we've made a good living at law and we're in a position where we can afford to espouse a cause and it's just become the position of this law office that. we're sick and tired of seeing young college kids, college fringe people, graduates, or drop-outs, decent kids who have no criminal intent, are not criminals, are peace-loving, law-abiding citizens in every other way, I think even the police would admit so-called "hippies" give them no trouble in the sense that they don't steal, rape or murder or anything else. The only place they violate the law is on so-called narcotics laws. We're just tired of seeing these kids marked with felony convictions and branded drug addicts, and seeing their entire careers being wasted. I just think the time has come to challenge the injustice of the statute as it is written, ai least if not to challenge the injustice, to take a long, hard look at where we're going. I just find it very difficult to believe the bright, articúlate, decent kids who come into this office charged with violations of the marijuana laws are criminals. This is one of the main reasons why we've gotten into this thing.

(The interview with Attorney Joseph Oteri was taken by Brian Faunce and Bud Burns for AVATAR, the UPS newspaper in Cambridge, Mass. It was edited for publication in the SUN. )