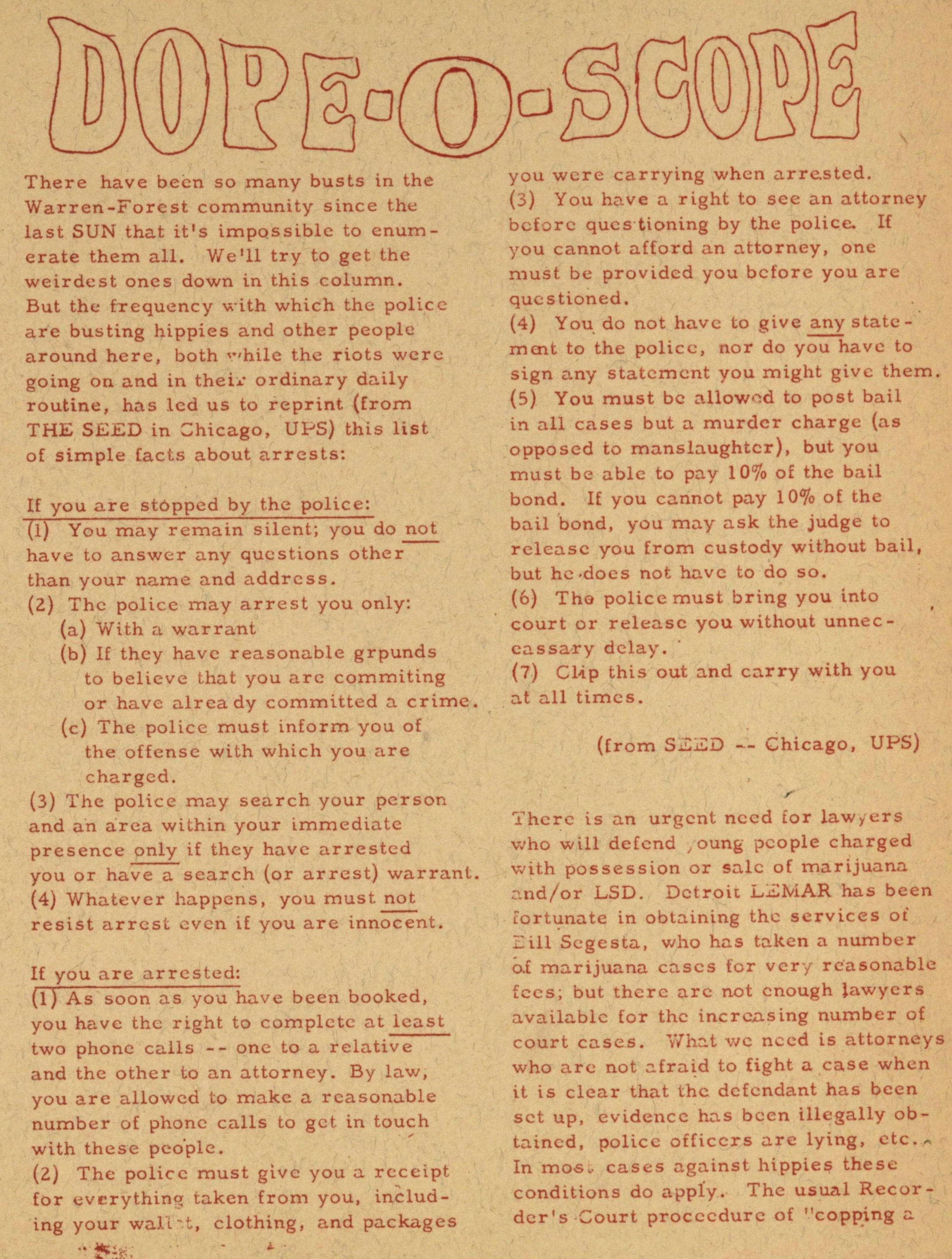 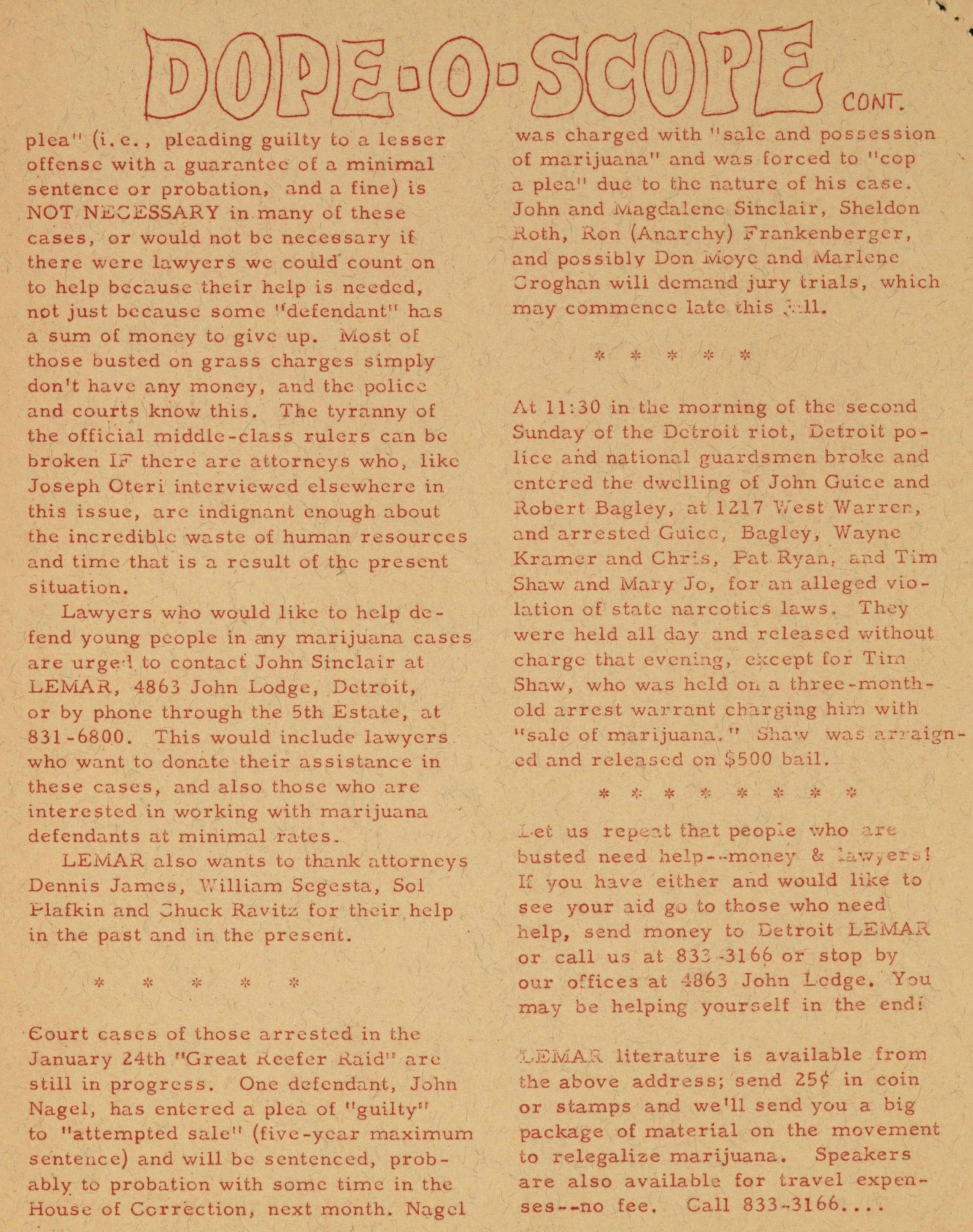 There have been so many busts in the Warren-Forest community since the last SUN that it's impossible to enumerate them all. We'll try to get the weirdest ones down in this column. But the frequency with which the police are busting hippies and other people around here, both while the riots were going on and in their ordinary daily routine, has led us to reprint (from THE SEED in Chicago, UPS) this list of simple facts about arrests:

If you are stopped by the police:

(1) You may remain silent; you do not have to answer any questions other than your name and address.

(2) The police may arrest you only:

(a) With a warrant

(b) If they have reasonable grounds to believe that you are committing or have already committed a crime.

(c) The police must inform you of the offense with which you are charged.

(3) The police may search your person and an area within your immediate presence only if they have arrested you or have a search (or arrest) warrant.

(4) Whatever happens, you must not resist arrest even if you are innocent.

If you are arrested:

(1) As soon as you have been booked, you have the right to complete at least two phone calls -- one to a relative and the other to an attorney. By law, you are allowed to make a reasonable number of phone calls to get in touch with these people.

(2) The police must give you a receipt for everything taken from you, including your wallet, clothing, and packages you were carrying when arrested.

(3) You have a right to see an attorney before questioning by the police. If you cannot afford an attorney, one must be provided you before you are questioned.

(6) The police must bring you into court or release you without unnecessary delay.

(7) Clip this out and carry with you at all times.

There is an urgent need for lawyers who will defend young people charged with possession or sale of marijuana and/or LSD. Detroit LEMAR has been fortunate in obtaining the services of Bill Segesta, who has taken a number of marijuana cases for very reasonable fees; but there are not enough lawyers available for the increasing number of court cases. What we need is attorneys who are not afraid to fight a case when it is clear that the defendant has been set up, evidence has been illegally obtained, police officers are lying, etc. In cases against hippies these conditions do apply. The usual Recorder's Court procedure of "copping plea" (i.e. pleading guilty to a lesser offense with a guarantee of a minimal sentence or probation, and a fine) is NOT NECESSARY in many of these cases, or would not be necessary if there were lawyers we could count on to help because their help is needed, not just because some "defendant" has a sum of money to give up. Most of those busted on grass charges simply don't have any money, and the police and courts know this. The tyranny of the official middle-class rulers can be broken IF there are attorneys who, like Joseph Oteri interviewed elsewhere in this issue, are indignant enough about the incredible waste of human resources and time that is a result of the present situation.

Lawyers who would like to help defend young people in any marijuana cases are urged to contact John Sinclair at LEMAR, 4863 John Lodge, Detroit, or by phone through the 5th Estate, at 831-6800. This would include lawyers who want to donate their assistance in these cases, and also those who are interested in working with marijuana defendants at minimal rates.

LEMAR also wants to thank attorneys Dennis James, William Segesta, Sol Plafkin and Chuck Ravitz for their help in the past and in the present.

Court cases of those arrested in the January 24th "Great Reefer Raid" are still in progress. One defendant, John Nagel, has entered a plea of "guilty" to "attempted sale" (five-year maximum sentence) and will be sentenced, probably to probation with some time in the House of Correction, next month. Nagel was charged with "sale and possession of marijuana" and was forced to "cop a plea" due to the nature of his case. John and Magdale Sinclair, Sheldon Roth, Ron (Anarchy) Frankenberger, and possibly Don Ivloye and Mariene Croghan will demand jury trials, which may commence late this fall.

At 11:30 in the morning of the second Sunday of the Detroit riot, Detroit police and national guardsmen broke and entered the dwelling of John Guice and Robert Bagley, at 1217 West Warrer, and arrested Guice, Bagley, Wayne Kramer and Chris, Pat Ryan, and Tim Shaw and Mary Jo, for an alleged violation of state narcotics laws. They were held all day and released without charge that evening, except for Tim Shaw, who was held on a three-month-old arrest warrant charging him with "sale of marijuana." Shaw was arraigned and released on $500 bail.

Let us repeat that people who are busted need help -- money & lawyers! If you have either and would like to see your aid go to those who need help, send money to Detroit LEMAR or call us at 833-3166 or stop by our office at 4863 John Lodge. You may be helping yourself in the end!

LEMAR iterature is available from the above address; send 25¢ in coin or stamps and we'll send you a big package of material on the movement to relegalize marijuana. Speakers are also available for travel expenses -- no fee. Call 833-3166....