There's a lot of ship happening everywhere on the planet 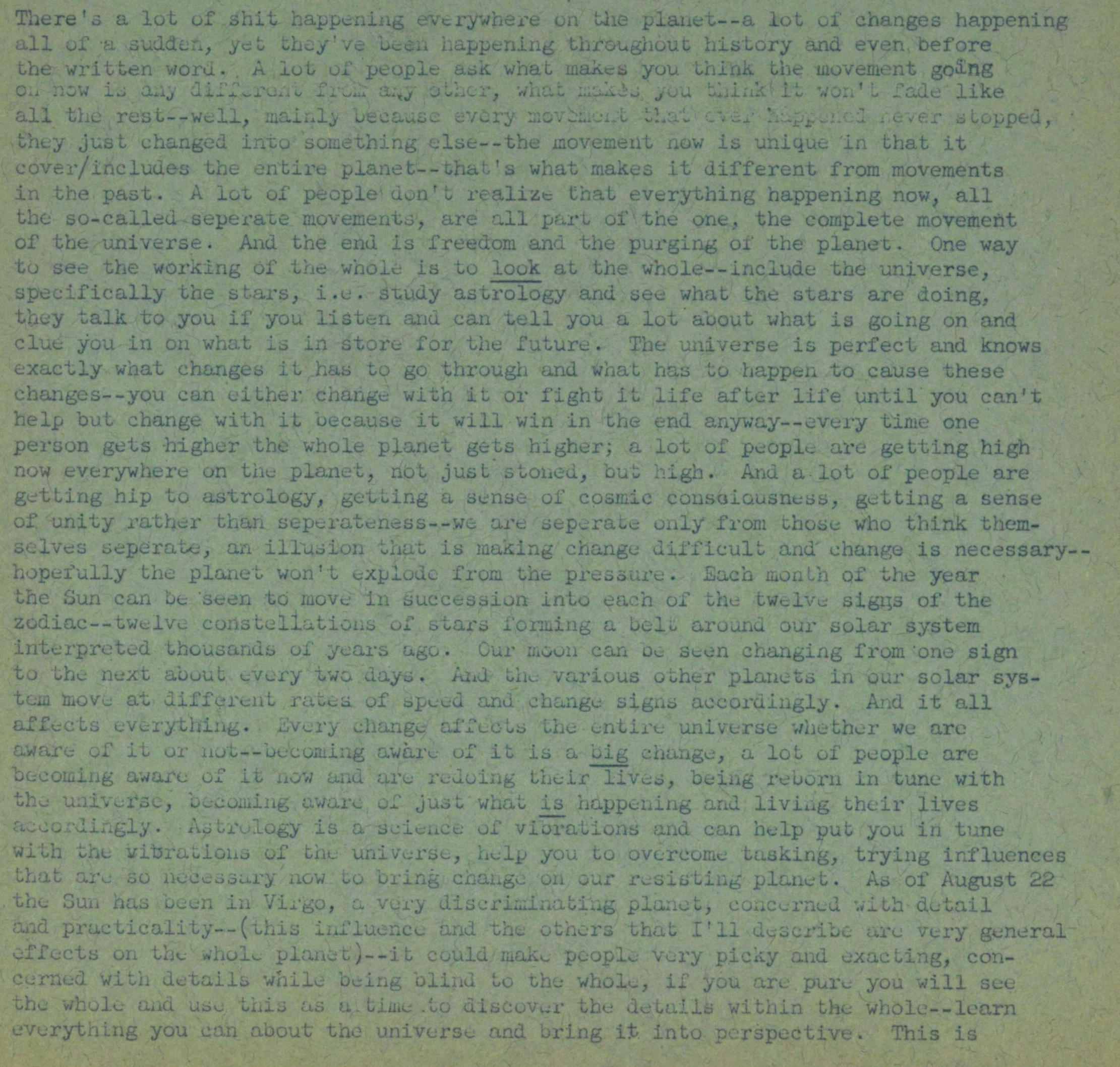 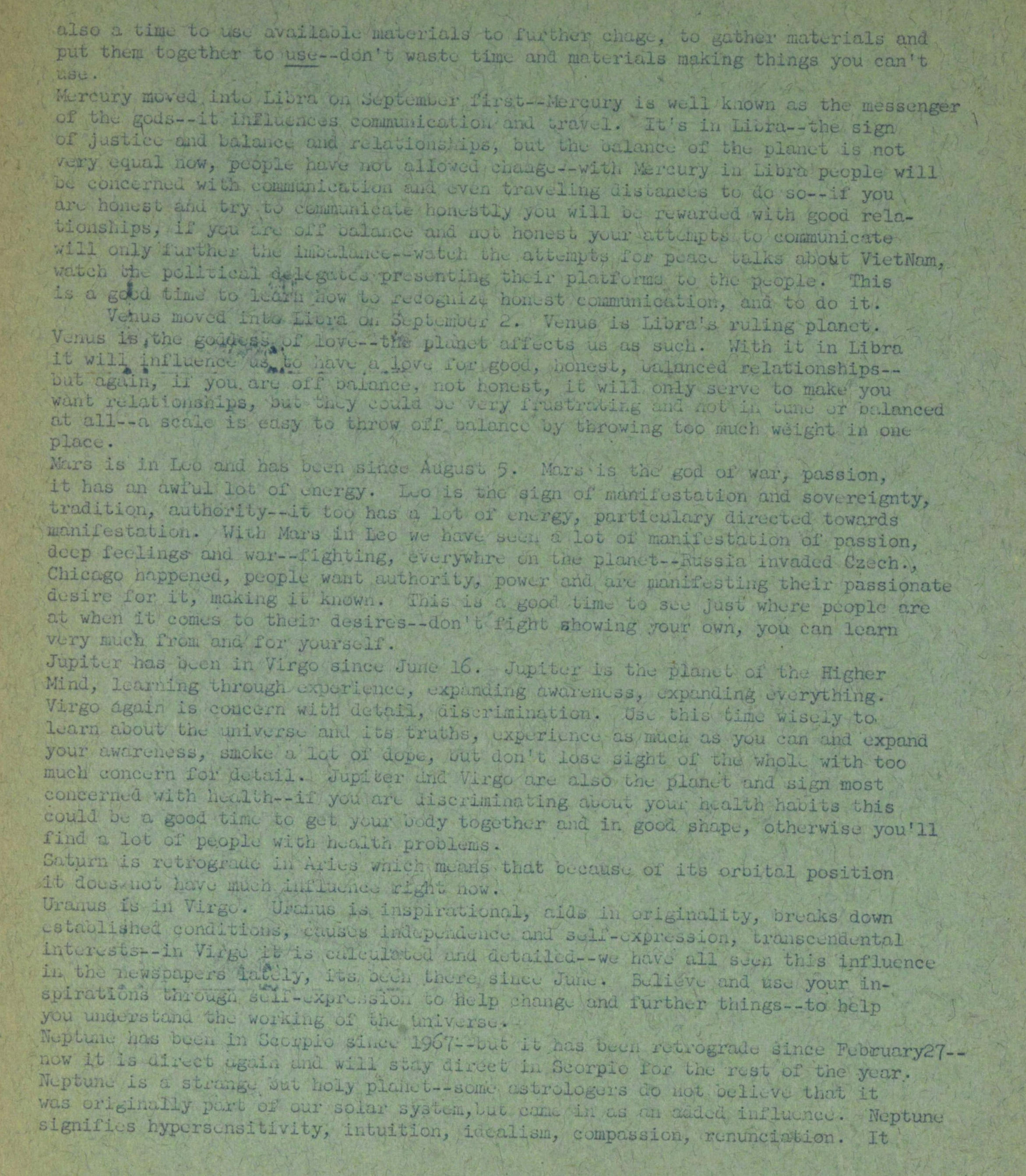 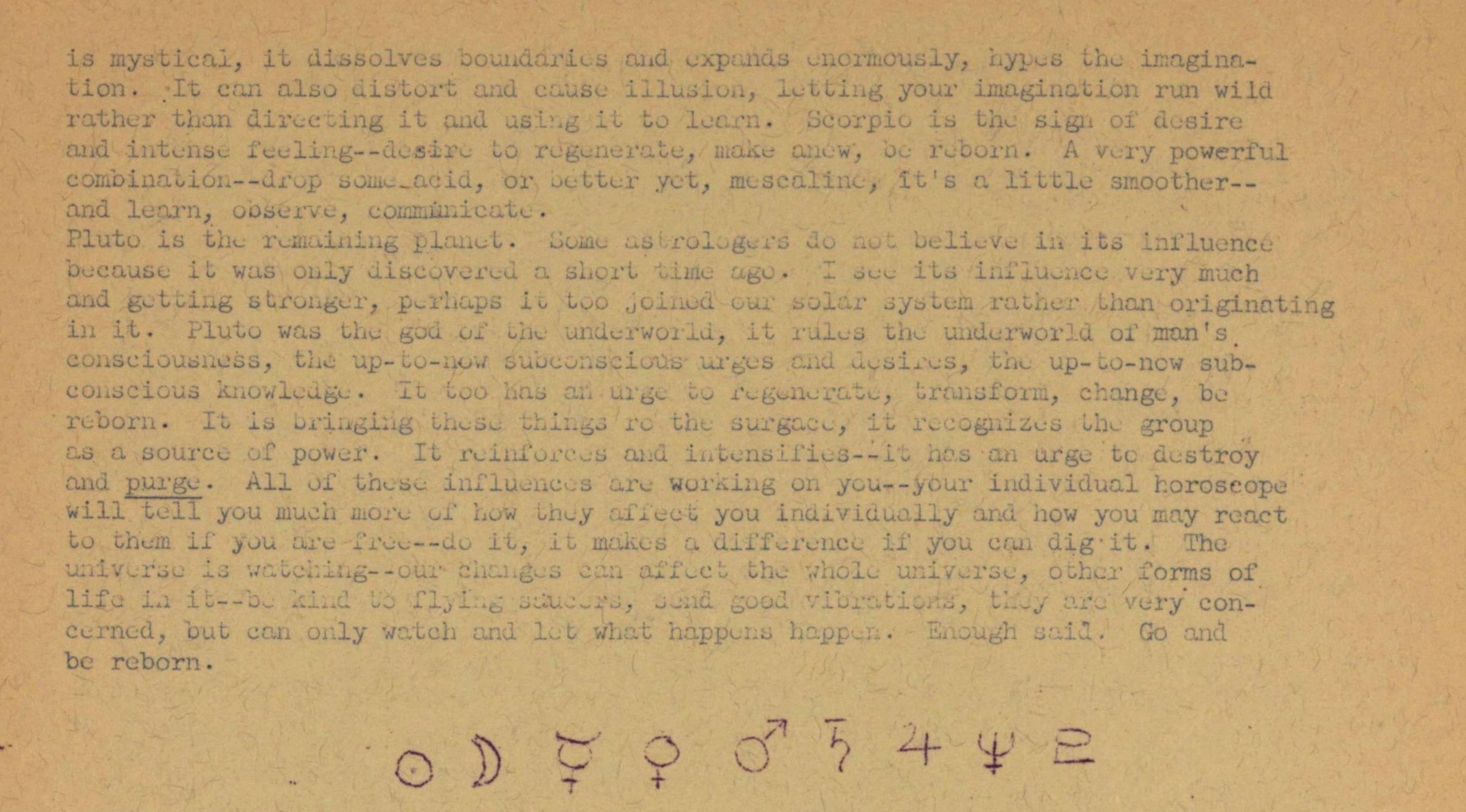 There's a lot of shit happening everywhere on the planet--a lot of changes happening all of a sudden, yet they've been happening throughout history and even before the written worü. A lot of people ask what makes you think the movement going ou now is any different from my other, what is you blink it won't fade like all the rest--well, mainly because every move Stort sau ever happened never stopped, they just changed into something else--the movement now is unique in that it cover/includes the entire planet--that's what makes it different from movements in the past. A lot of people don't realize that everything happening now, all the so-called separate movements, are all part of the one, the complete movement of the universe. And the end is freedom and the purging of the planet. One way to see the working of the whole is to look at the whole--include the universe, specifically the stars, i.e. study astrology and see what the stars are doing, they talk to you if you listen and can tell you a lot about what is going on and clue you in on what is in store for the future. The universe is perfect and knows exactly what changes it has to go through and what has to happen to cause these changes--you can either change with it or fight it life after life until you can't help but change with it because it will win in the end anyway--every time one person gets higher the whole planet gets higher; a lot of people are getting high now everywhere on the planet, not just stoned, but high. And a lot of people are getting hip to astrology, getting a sense of cosmic consciousness, getting a sense of unity rather than separateness--we are seperate only from those who think themselves separate, an illusion that is making change difficult and change is necessary-- hopefully the planet won't explode from the pressure. Each month of the year the Sun can be seen to move in succession into each of the twelve signs of the zodiac--twelve constellations of stars forming a belt around our solar system interpreted thousands of years ago. Our moon can be seen changing from one sign to the next about every two days. And the various other planets in our solar system move at different rates of speed and change signs accordingly. And it all affects everything. Every change affects the entire universe whether we are aware of it or not--becoming aware of it is a big change, a lot of people are becoming aware of it now and are redoing their lives, being reborn in tune with the universe, becoming aware of just what is happening and living their lives accordingly. Astrology is a science of vibrations and can help put you in tune with the vibrations of the universe, help you to overcome tasking, trying influences that are so necessary now to bring change on our resisting planet. As of August 22 the Sun has been in Virgo, a very discriminating planet, concerned with detail and practicality--(this influence and the others that I'll describe are very general effects on the whole planet)--it could make people very picky and exacting, concerned with details while being blind to the whole, if you are pure you will see the whole and use this as a time to discover the details within the whole--learn everything you can about the universe and bring it into perspective.

This is also a time to use available materials to further change, to gather materials and put them together to use--don't waste time and materials making things you can't use. Mercury moves into Libra on September first--Mereury is well known as the messenger of the gods--it influences communication and travel. It's in Livra--the sign of justice-and balance and relationships, but the balance of the planet is not very equal now, people have not allowed change--with Mercury in Libro people will be concerned with communication and even traveling distances to do so--if you are honest and try to communicate honestly you will be rewarded with good relationships, if you are or balance and not honest your attempts to communicate will only further the imbalance--watch the attempts for peace talks about Viet Nam, watch the political delegates representing their plantations to the people. This is a good time to cart now to recognize honest communication, and to do it. Venus moves into Libra Oli September 2. Venus is Libra's ruling planet. Venus is, the goddess of love--tre plant affects us as such. With it in Libra it will influence us to have a love for good, honest, balanced relationships-- but again, if you are off balance, not honest, it will only serve to make you want relationships, but they could be very frustrating and mot in tune or balanced at all--a scale is easy to throw oil balance by throwing too much weight in one place. Mars is in Leo and has been since August 5. Mars is the god of war, passion, it has an awful lot of energy. Lo is the sign of manifestation and sovereignty, tradition, authority--it too has a lot of energy, particularly directed towards manifestation. With Mar's in Leo we have such a lot of manifestation of passion, dcep feelings and war--fighting, everywhere on the planet--Russia invaded Czech., Chicago happened, people want authority, power and are manifesting their passionate desire for it, making it known. This is a good time to see just where people are at when it comes to their desires--don't fight showing your own, you can learn very much from and for yourself. Jupiter has been in Virgo since June 16. Jupiter is the planet on the Higher Mind, learning through experience, expanding awareness, expanding everything. Virgo again is concern with detail, äiscrimination. Use this time wisely to learn about the universe and its truths, experience as much as you can and expand your awareness, smoke a lot of dope, but don't lose sight of the whole with too much concern for detail. Jupiter und virgo are also the planet and sign most concerned with health--if you are discriminating about your health habits this could be a good time to get your body together and in good shape, otherwise you'11 find a lot of people with health problems. Saturn is retrograde in Aries which means that because of its orbital position Stib dous 110t have much influence right now. Uranus is in Virgo. Uranus is inspirational, aids in originality, breaks down established conditions, causes independence and sull-expression, transcendental interests--in Virgo it is calculated and detailed--we have all suen this influence in the newspapers lately, its been there since June. Believe and use your inspirations through suin- uxpression to help change and further things--to help you understand the working on the universe. Neptune has been in Scorpio since 1967--but it has been retrograde since February 27-- now it is direct again and will stay direet in Seorpio for the rest of the year. Neptune is a strange but holy planet--some astrologers do not believe that it was originally part of our solar system, ut cand in as an added influence. Neptune signifies hypersensitivity, intuition, idcalisin, compassion, renunciation. It is mystical, it dissolves boundarics and expands enormously, hypes the imagination. It can also distort and cause illusion, letting your imagination run wild rather than direeting it and using it to learn. Scorpio is the sign of desire and intense feeling--desire to regenerate, make anew, be reborn. A very powerful combination--drop some_acid, or better yet, mescaline, it's a little smoother-- and learn, observe, communicate. Pluto is the remaining planet. Somu astrologers do not believe in its influence because it was only discovered a short time ago. I see its influence very much and getting stronger, perhaps it too joined our solar system rather than originating in it. Pluto was the god of the underworld, it rules the underworld of man's. consciousness, the up-to-now subconscious urges and desires, the up-to-now subconscious knowledge. It too has an urge to regenerate, transform, change, be reborn. It is bringing these things ro the surgaku, it recognizes the group as a source of power. It reinforces and intensifies--it has an urge to destroy and purge. All of these influences are working on your-your individual horoscope will tell you much more of how they affect you individually and how you may react to them if you are free--do it, it makes a difference if you can dig it. The universe is watching--Our Changes can affect the whole universe, other forms of life in it--bu kind to flying sucurs, und good vibrations, they are very concerned, but can only watch and lot what happens happen. Enough said. Go and be reborn.