Flash! Ann Arbor Administration Grants Use Of Park To Rock And Roll Fiends In Unprecedented Gesture Of Cooperation! Free Music For All 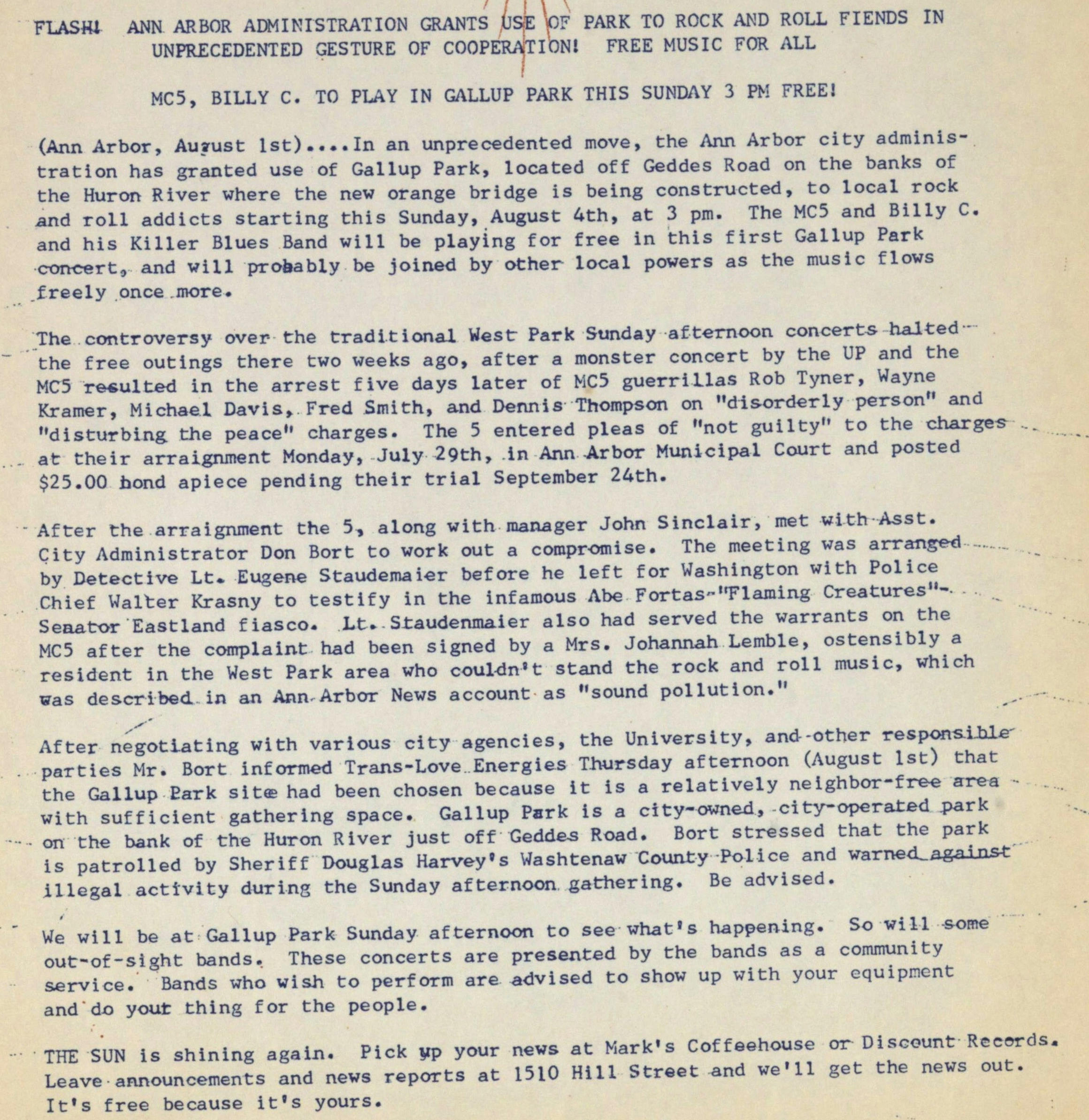 FLASH! ANN ARBOR ADMINISTRATION GRANTS USE OF PARK TO ROCK AND ROLL FIENDS IN
UNPRECEDENTED GESTURE OF COOPERATION! FREE MUSIC FOR ALL
MC5, BILLY C. TO PLAY IN GALLUP PARK THIS SUNDAY 3 PM FREE!
(Ann Arbor, August 1st).... In an unprecedented move, the Ann Arbor city administration has granted use of Gallup Park, located off Geddes Road on the banks of the Huron River where the new orange bridge is being constructed, to local rock and roll addicts starting this Sunday, August 4th, at 3 pm. The MC5 and Billy C. and his Killer Blues Band will be playing for free in this first Gallup Park concert, and will probably be joined by other local powers as the music flows freely once more.
The controversy over the traditional West Park Sunday afternoon concerts halted the free outings there two weeks ago, after a monster concert by the UP and the MC5 resulted in the arrest five days later of MC5 guerrillas Rob Tyner, Wayne Kramer, Michael Davis, Fred Smith, and Dennis Thompson on "disorderly person" and "disturbing the peace" charges. The 5 entered pleas of "not guilty to the charges at their arraignment Monday, July 29th, .in -Ann Arbor Municipal Court and posted $25.00 bond apiece pending their trial September 24th.
After the arraignment the 5, along with manager John Sinclair, met with Asst. Çity Administrator Don Bort to work out a compromise. The meeting was arranged by Detective Lt. Eugene Staudema ier before he left for Washington with Police Chief Walter Krasny to testify in the infamous Abe Fortas "Flaming Creaturesh.... Senator Eastland fiasco. Lt. Staudenmaier also had served the warrants on the MC5 after the complaint had been signed by a Mrs. Johannah Lemble, ostensibly a resident in the West Park area who couldn't stand the rock and roll music, which was described in an Ann Arbor News account as "sound pollution."
After negotiating with various city agencies, the University, and other responsible parties Mr. Bort informed Trans-Love Energies Thursday afternoon (August 1st) that the Gallup Park site had been chosen because it is a relatively neighbor-free area - with sufficient gathering space. Gallup Park is a city-owned, -city-operated park on the bank of the Huron River just off Geddes Road. Bort stressed that the park is patrolled by Sheriff Douglas Harvey's Washtenaw County Police and warned against illegal activity during the Sunday afternoon gathering. Be advised.
We will be at Gallup Park Sunday afternoon to see what's happening. So wi 11 some out-of-sight bands. These concerts are presented by the bands as a community service. Bands who wish to perform are advised to show up with your equipment and do your thing for the people.
THE SUN is shining again. Pick up your news at Mark's Coffeehouse or Discount. Records, Leave announcements and news reports at 1510 Hill Street and we'll get the news out. It's free because it's yours.