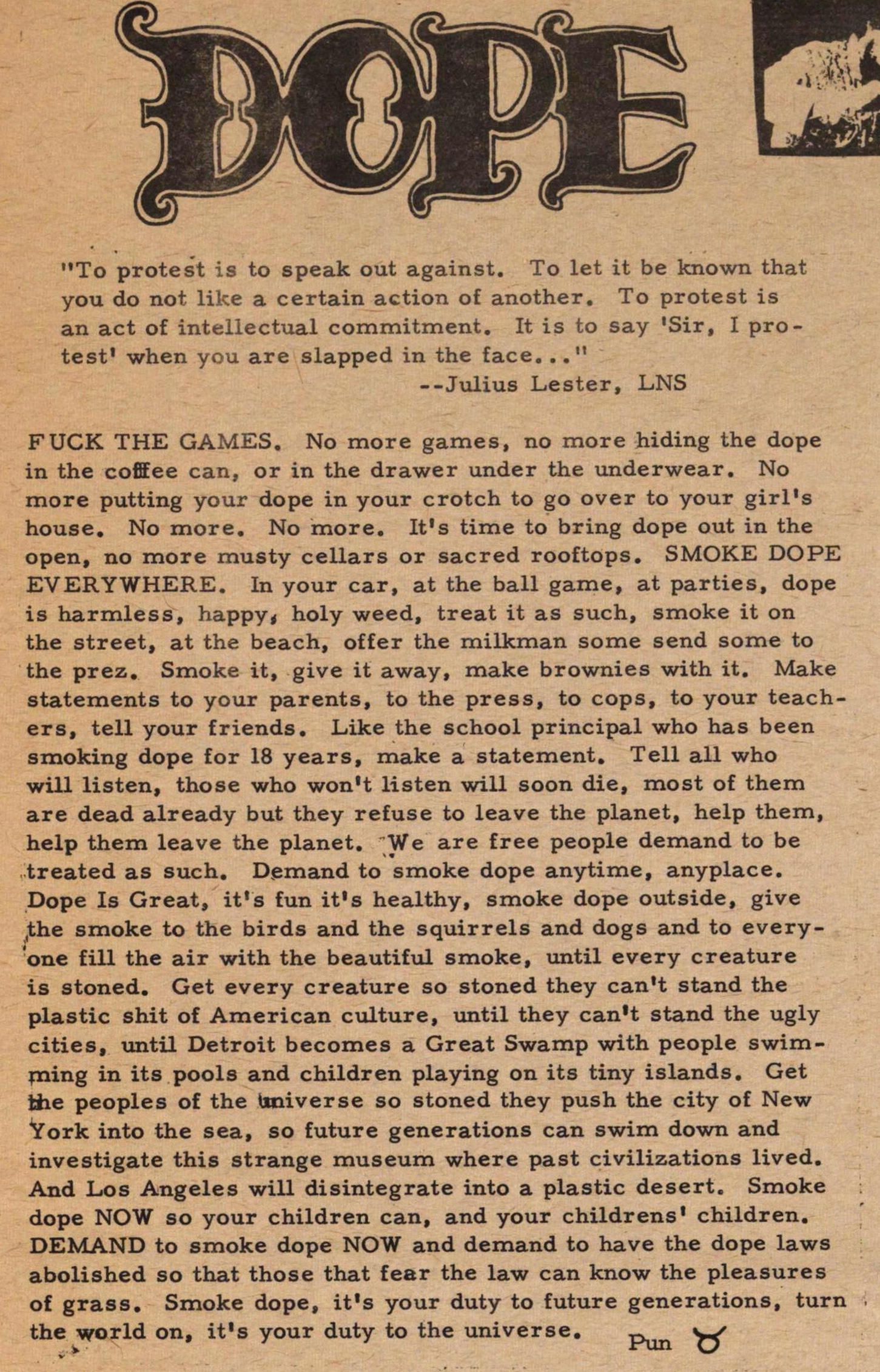 "To protest is to speak out against. To let it be known that you do not like a certain action of another. To protest is an act of intellectual commitment. It is to say 'Sir, I protest' when you are slapped in the face. .." --Julius Lester, LNS FUCK THE GAMES. No more games, no more hiding the dope in the colee can, or in the drawer under the underwear. No more putting your dope in your crotch to go over to your girl's house. No more. No more. It's time to bring dope out in the open, no more musty cellars or sacred rooftops. SMOKE DOPE EVERYWHERE. In your car, at the ball game, at parties, dope is harmless, happy holy weed, treat it as such, smoke it on the street, at the beach, offer the milkman some send some to the prez. Smoke it, give it away, make brownies with it. Make statements to your parents, to the press, to cops, to your teachers, teil your friends. Like the school principal who has been smoking dope for 18 years, make a statement. Teil all who will listen, those who won't listen will soon die, most of them are dead already but they refuse to leave the planet, help them, help them leave the planet. 'We are free people demand to be treated as such. Demand to smoke dope anytime, anyplace. Dope Is Great, it's fun it's healthy, smoke dope outside, give ,the smoke to the birds and the squirrels and dogs and to every'one fill the air with the beautiful smoke, until every creature is stoned. Get every creature so stoned they can't stand the plastic shit of American culture, until they can't stand the ugly cities, until Detroit becomes a Great Swamp with people swimrning in its pools and children playing on its tiny islands. Get the peoples of the Imiverse so stoned they push the city of New York into the sea, so future generations can swim down and investígate this strange museum where past civilizations lived. And Los Angeles will disintegrate into a plastic desert. Smoke dope NOW so your children can, and your childrens' children. DEMAND to smoke dope NOW and demand to have the dope laws abolished so that those that fear the law can know the pleasures of grass. Smoke dope, it's your duty to future generations, turn the world on, it's your duty to the universe. #■■