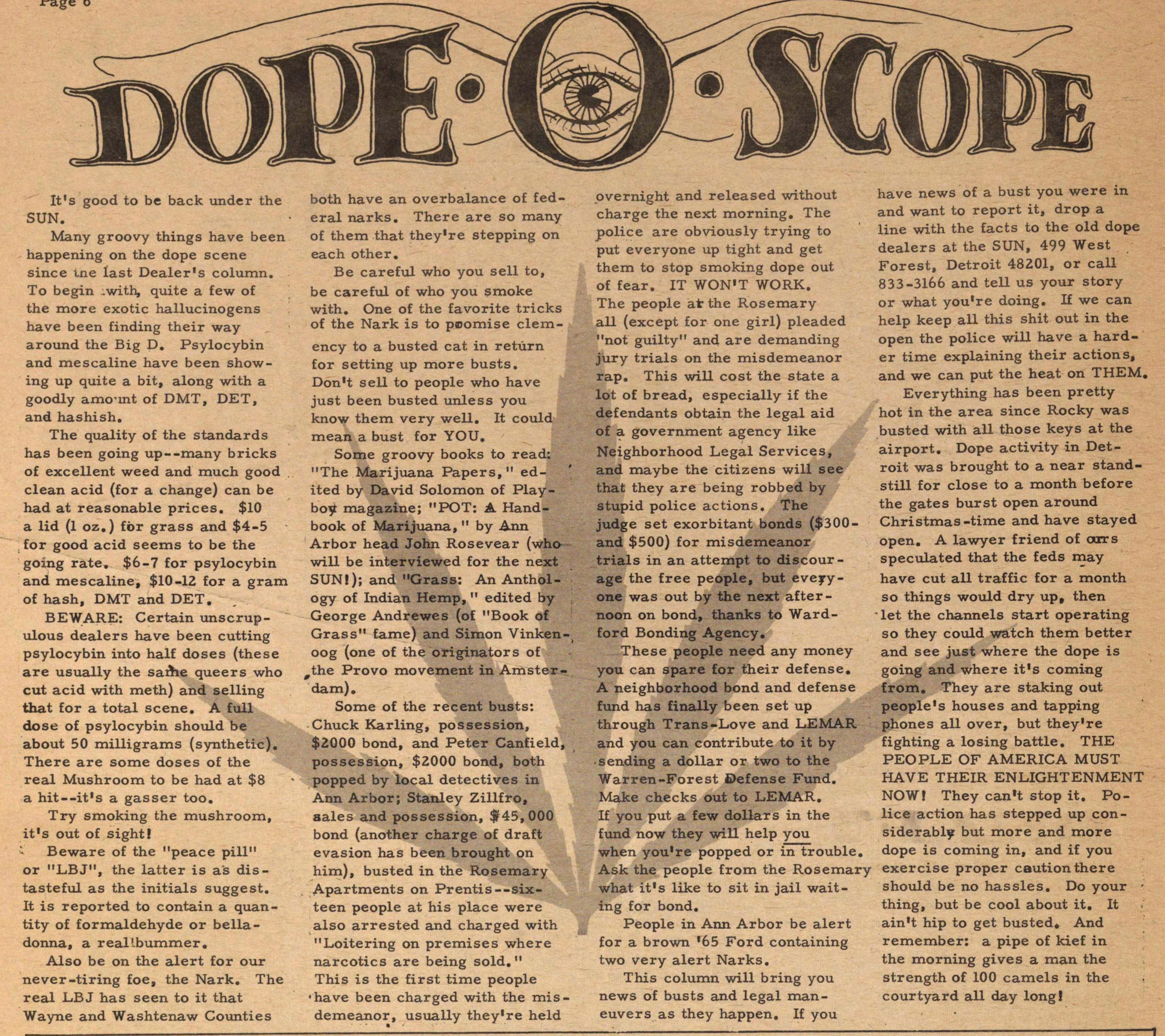 It's good to be back under the SUN. Many groovy things have been happening on the dope scène since tne íast Dealer's column. To begin .with, quite a few of the more exotic hallucinogens have been finding their way around the Big D. Psylocybin and mescaline have been showing up quite a bit, along with a goodly amo-int of DMT, DET, and hashish. The quality of the standards has been going up--many bricks oL excellent weed and much good . clean acid (for a change) can be had at reasonable prices. $10 a lid (1 oz.) fbr grass and $4-5 for good acid seems to be the going rate. $6-7 for psylocybin and mescaline, $10-12 for a gram of hash, DMT and DET. BEWARE: Certain unscrupulous dealers have been cutting psylocybin into half doses (these are usually the same queers who cut acid with meth) and selling that for a total scène. A f uil dose of psylocybin should be about 50 milligrams (synthetic). There are some doses of the real Mushroom to be had at $8 a hit--it's a gasser too. Try smoking the mushroom, it's out of sight! 5 Beware of the "peace pill" or "L.BJ", the latter is a's distasteful as the initials suggest. It is reported to contain a quantity of formaldehyde or belladonna, a reallbummer. Also be on the alert for our never-tiring foe, the Nark. The real LBJ has seen to it that Wayne and Washtenaw Counties both have an overbalance of federal narks. There are so many of them that they're stepping on each other. Be careful who you sell to, be careful of who you smoke with. One of the favorite tricks of the Nark is to pcomise clemency to a busted cat in return for setting up more busts. Don't sell to people who have just been busted unless you know them very well. It could mean a bust for YOU. Some groovy books to read: "The Marijuana Papers," edited by David Solomon of Playbojt magazine; "POT: A Handbook of Marijuana, " by Ann Arbor head John Rosevear (who-will be interviewed for the next SUN!); and "Grass: An Anthology of Indian Hemp, " edited by George Andrewes (of "Book of Grass" fame) and Simon Vinken-, oog (one of the originators of the Provo movement in Amsterdam), Some of the recent busts: Chuck Karling, possession, $2000 bond, and Peter Canfield, possession, $2000 bond, both popped by local detectives in Ann Arbor; Stanley Zillfro, aales and possession, f45, 000 bond (another charge of draft evasion has been brought on him), busted in the Rosemary Apartments on Prentis--sixteen people at his place were also arrested and charged with "Loitering on premises where narcotics are being sold. " This is the first time people have been charged with the misdemeanor, usually they're held pvernight and released without charge the next morning. The pólice are obviously trying to put everyone up tight and get them to stop smoking dope out of fear. IT WON'T WORK. The people at the Rosemary all (except for one girl) pleaded "not guilty" and are demanding jury trials on the misdemeanor rap. This will cost the state a lot of bread, especially if the defendants obtain the legal aid oL a government agency like Neighborhood Legal Services, and maybe the citizens will see that they are being robbed by stupid pólice actions. The judge set exorbitant bonds ($300and $500) for misdemeanor trials in an attempt to discourage the free people, but evejryone was out by the next afternoon on bond, thanks to Wardford Bonding Agency. These people need any money you can spare for their defense. A neighborhood bond and defense fund has finally been set up through Trans -Love and LEMAR and you can contribute to it by sending a dollar or two to the Warren-Forest Defense Fund. Make checks out to LEMAR. IL you put a few dollars in the fund now they will help you when you're popped or in trouble. Ask the people from the Rosemary what it's like to sit in jail waiting for bond. People in Ann Arbor be alert for a brown '65 Ford containing two very alert Narks. This column will bring you news of busts and legal maneuvers as they happen. If you have news of a bust you we re in and want to report it, drop a line with the facts to the old dope dealers at the SUN, 499 West Forest, Detroit 48201, or cali 833-3166 and teil us your story or what you're doing. If we can help keep all this shit out in the open the pólice will have a harder time explaining their actions, and we can put the heat on THEM, Everything has been pretty hot in the area since Rocky was busted with all those keys at the airport. Dope activity in Detroit was brought to a near standstill for close to a month before the gates burst open around Christmas-time and have stayed open. A lawyer friend of ocrrs speculated that the feds may have cut all traffic for a month so things would dry upt then let the channels start operating so they could watch them bette r and see just where the dope is going and where it's coming from. They are staking out people's houses and tapping phones all over, but they're fighting a losing battle. THE PEOPLE OF AMERICA MUST HAVE THEIR ENL.IGHTENMENT NOWt They can 't stop it. Police action has stepped up considerably but more and more dope is coming in, and if you exercise proper cautionthere should be no hassles. Do your ■ thing, but be cool about it. It ain't hip to get busted. And remember: a pipe of kief in the morning gives a man the strength of 100 camels in the courtyard all day long!