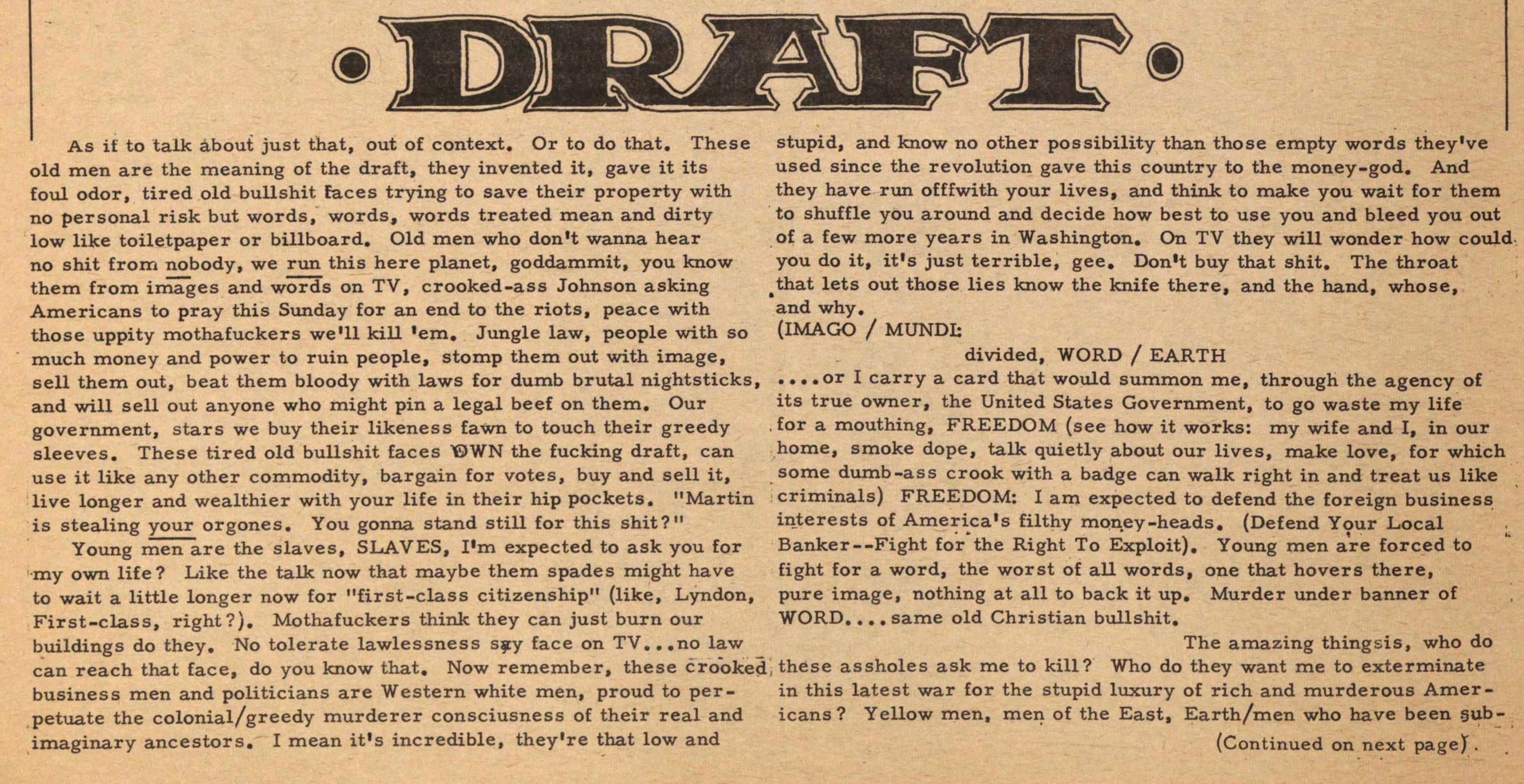 As if to talk about just that, out of context. Or to do that. These old men are the meaning of the draft, they invented it, gave it its foul odor, tired old bullshit faces trying to save their property with no personal risk but words, words, words treated mean and dirty low like toiletpaper or billboard. Oíd raen who don't wanna hear no shit from nobody, we run this here planet, goddammit, you know them from images and words on TV, crooked-ass Johnson asking Americans to pray this Sunday for an end to the riots, peace with those uppity mothafuckers we'll kill 'em. Jungle law, people with so much money and power to ruin people, stomp them out with image, sell them out, beat them bloody with laws for dumb brutal nightsticks, and will sell out anyone who might pin a legal beef on them. Our government, stars we buy their likeness fawn to touch their greedy sleeves. These tired old bullshit faces OWN the fucking draft, can use it like any other commodity, bargain for votes, buy and sell it, live longer and wealthier with your life in their hip pockets. "Martin is stealing your orgones. You gonna stand still for this shit?"

Young men are the slaves, SLAVES, I'm expected to ask you for my own life? Like the talk now that maybe them spades might have to wait a little longer now for "first-class citizenship" (like, Lyndon, First-class, right?). Mothafuckers think they can just burn our buildings do they. No tolerate lawlessness say face on TV... no law can reach that face, do you know that. Now remember, these crooked business men and politicians are Western white men, proud to perpetuate the colonial greedy murderer consciousness of their real and imaginary ancestors. I mean it's incredible, they're that low and stupid, and know no other possibility than those empty words they've used since the revolution gave this country to the money-god. And they have run off with your lives, and think to make you wait for them to shuffle you around and decide how best to use you and bleed you out of a few more years in Washington. On TV they will wonder how could you do it, it's just terrible, gee. Don't buy that shit. The throat that lets out those lies know the knife there, and the hand, whose, and why.

....or I carry a card that would summon me, through the agency of its true owner, the United States Government, to go waste my life for a mouthing, FREEDOM (see how it works: my wife and I, in our home, smoke dope, talk quietly about our lives, make love, for which some dumb-ass crook with a badge can walk right in and treat us like criminals) FREEDOM: I am expected to defend the foreign business interests of America's filthy money-heads. (Defend Your Local Banker - Fight for the Right To Exploit). Young men are forced to fight for a word, the worst of all words, one that hovers there, pure image, nothing at all to back it up. Murder under banner of WORD. . . . same oíd Christian bullshit.

The amazing thing is, who do these assholes ask me to kill? Who do they want me to exterminate in this latest war for the stupid luxury of rich and murderous Americans? Yellow men, men of the East, Earth/men who have been sub-

(Continued on next page)

jected to the most intolerable colonialism for longer than General Motors has had its money, men wh've been fighting, fighting, fighting for their own LAND, goddammit, which these assholes have been trying to steal all along. Poor bastards fighting for the lives they used to think belonged to them, the way life does. Defending the earth they live their tortured lives on.

That's what those dirty thieves are up to, and it's amazing that we allow it. They sit back there and check the business charts and bargain and step on each other a little and decide which furriners to wipe out next. Those tired old bullshit faces INVENT these wars, they own them, and they play them out with (do you believe it?) OUR LIVES. UP YOUR TIRED GREEN ASSHOLES, TIRED OLD BULLSHIT FACES. GO FIGHT YOUR OWN FILTHY WARS, AGAINST ALL THE OLD FILTHY-WAR-INVENTORS OF OTHER NATIONS OF THE EARTH. Us young men got lives and wives and families to make strong enough to resist the bullshit you've made of your lives. The fact is it is the old men, the men who have been around long enough to have had their minds pretty well fucked around by now, have had for the last 30 years or so to say all those things that weren't true, or were in some way contrived, in order to "project" the right "personality" for the job, any job, the money, power, whatever, the thing they've always had to do, get that image to hover about 6 inched away from them, and let it work its magic, while behind those images, the public's sustenance, thousands of brains counting their money, or the smiles on the boss's fat face, these men, the old men, the tired old bullshit faces you see in the newspaper, the leaders of all the world's businesses (i.e. steel, banking, politics, advertising, etc.), these are literally the men who invent the wars, set its terms, and supervise its waging--and they use our lives to pay for these wars. We allow ourselves to be used as a commodity with which the world's business leaders defend their vested interests.

I mean if this country would give back all the land it has stolen, not including the physical United States of America, mainland, (the land the white men came and neatly, like, poof, saw as theirs, just gotta wipe out them fucking redskins), and would give back the money it allowed its citizens to steal from peoples native to various exploited countries, and if all its crooked "Allies" would do likewise, maybe our leaders wouldn't have so much to worry about. But they won't do that. They invent wars instead, and beat the shit out of us if we don't go kill people and be killed and have a hard-on in the face of that last bullet, smashing thru our red, white and blue breastbones, to die and love it to protect their stupid luxury.

The only really sensible thing to do, and people really do have to take care of their own business, or they fuck up their own lives (viz. the tired old bullshit faces), is to let them poor critters kill one another if they must. Over their bank accounts and their mines and oil fields of the world's countries. (the dumb asses)