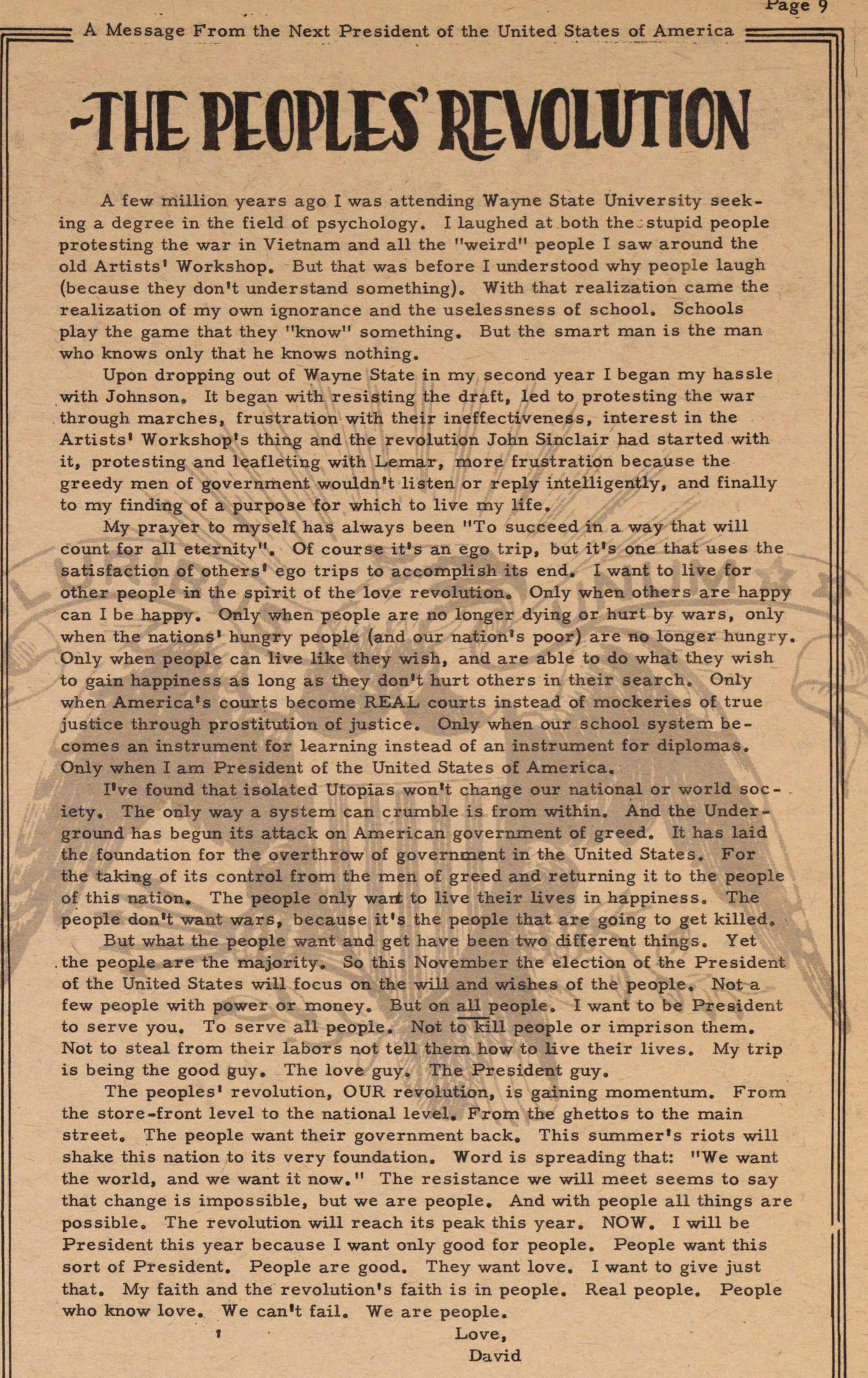 A few million years ago I was attending Wayne State University seeking a degree in the field of psychology. I laughed at both the stupid people protesting the war in Vietnam and all the "weird" people I saw around the old Artists' Workshop. But that was before I understood why people laugh (because they don't understand something). With that realization came the realization of my own ignorance and the uselessness of school. Schools play the game that they "know" something. But the smart man is the man who knows only that he knows nothing. Upon dropping out of Wayne State in my second year I began my hassle with Johnson. It began with resisting the draft, led to protesting the war through marches, frustration with their ineffectiveness, interest in the Artists1 Workshop's thing and the revolution John Sinclair had started with it, protesting and leafleting with Lemar, more frustration because the greedy men of government wouldn't listen or reply intelligently, and finally to my finding of a purpose for which to live my life. My prayer to myself has always been "To succeed in a way that will count for all eternity". Of course it's an ego trip, but it's one that uses the satisfaction of others1 ego trips to accomplish its end, I want to live for other people in the spirit of the love revolution. Only when others are happy can I be happy. Only when people are no longer dying or hurt by wars, only when the nations' hungry people (and our nation's poor) are no longer hungry. Only when people can live like they wish, and are able to do what they wish to gain happiness as long as they don't hurt others in their search. Only when America's courts become REAL courts instead of mockeries of true justice through prostitution of justice. Only when our school system becomes an instrument for learning instead of an instrument for diplomas. Only when I am President of the United States oL America. I've found that isolated Utopias won't change our national or world society. The only way a system can crumble is f rom within. And the Underground has begun its attack on American government of greed. It has laid the foundation for the overthrow of government in the United States. For the taking of its control from the men of greed and returning it to the people of this nation. The people only wait to live their lives in happiness. The people don't want wars, because it's the people that are going to get killed. But what the people want and get have been two different things. Yet .the people are the majority. So this November the election of the President of the United States will focus on the will and wishes of the people. Not a few people with power or money. But on all people. I want to be President to serve you. To serve all people. Not to kill people or imprison them. Not to steal from their labors not tell them how to live their lives. My trip is being the good guy. The love guy. The President guy. The peoples' revolution, OUR revolution, is gaining momentum. From the store-front level to the national level. From the ghettos to the main street. The people want their government back. This summer's riots will shake this nation to its very foundation. Word is spreading that: "We want the world, and we want it now. " The resistance we will meet seems to say that change is impossible, but we are people. And with people all things are possible. The revolution will reach its peak this year. NOW. I will be President this year because I want only good for people. People want this sort of President. People are good. They want love. I want to give just that. My faith and the revolution's faith is in people. Real people. People who know love. We can't fail. We are people. Love,