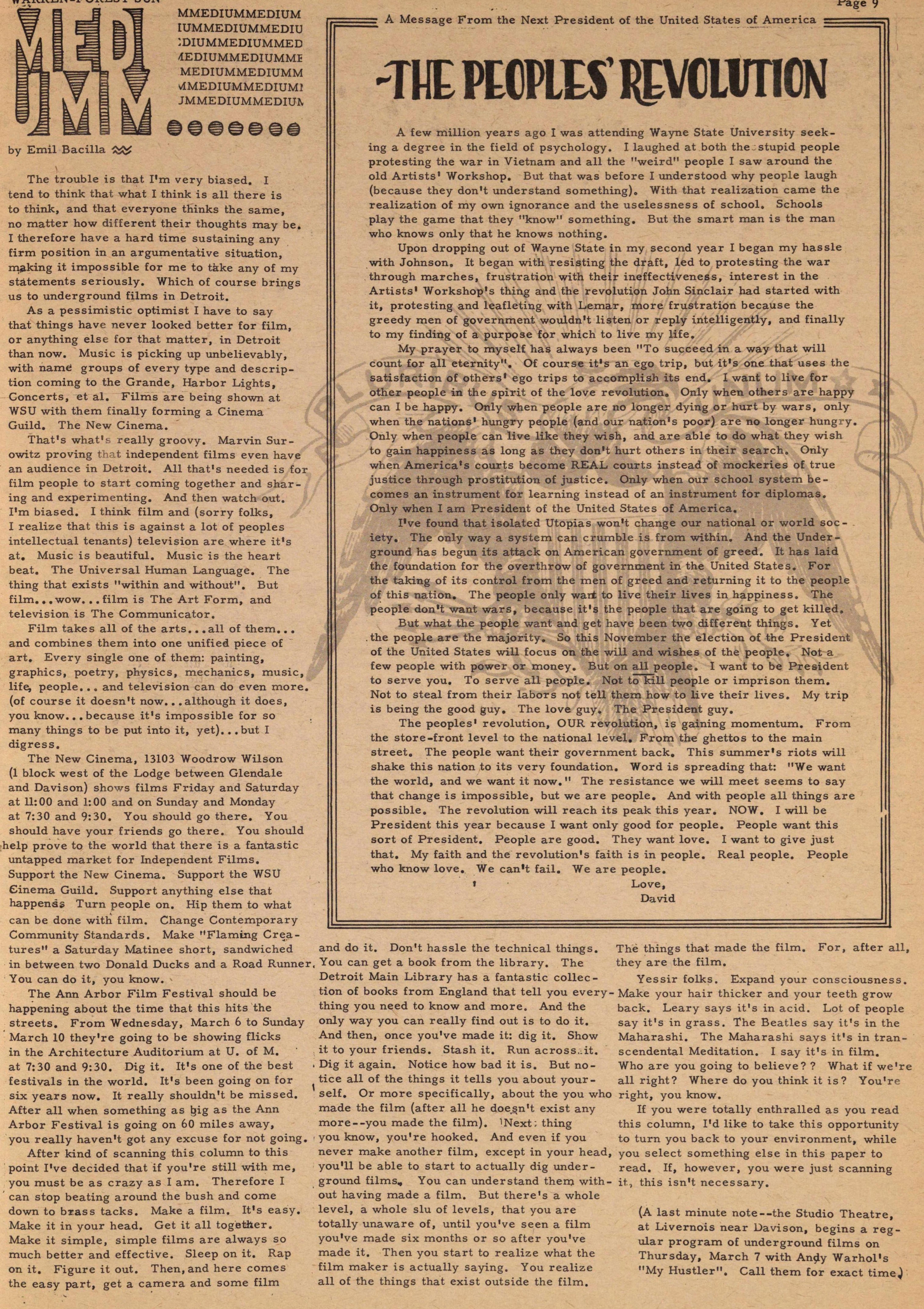 mmediummedium iummediummediu :diummediummed iediummediumme MEDIUMMEDIUMM vlMEDIUMMEDIUMl JMMEDIUMMEDIUK The trouble is that I'm very biased. I tend to think that what I think is all there is to think, and that everyone thinks the same, no matter how different their thoughts may be. I therefore have a hard time sustaining any firm position in an argumentative situation, making it impossible for me to tkke any of my statements seriously. Which of course brings us to underground films in Detroit. As a pessimistic optimist I have to say that things have never looked better for film, or anything else for that matter, in Detroit than now. Music is picking up unbelievably, with name groups of every type and description coming to the Grande, Harbor Lights, Concerts, et al. Films are being shown at WSU with them finally forming a Cinema Guild. The New Cinema. That's what's really groovy. Marvin Surowitz proving that independent films even have an audience in Detroit. All that's needed is for film people to start coming together and sharing and experimenting. And then watch out. I'm biased. I think film and (sorry folks, I realize that this is against a lot of peoples intellectual tenants) televisión are where it's at. Music is beautiful. Music is the heart beat. The Universal Human Language. The thing that exists "within and without". But film. . .wow. . . film is The Art Form, and televisión is The Communicator. Film takes all of the arts. . .all of them. . . and combines them into one unified piece of art. Every single one of them: painting, graphics, poetry, physics, mechanics, music, life, people. . . and televisión can do even more, (of course it doesn't now. . . although it does, you know. . . because it's impossible for so many things to be put into it, yet). . .but I digress. The New Cinema, 13103 Woodrow Wilson (1 block west of the Lodge between Glendale and Davison) shows films Friday and Saturday at 11:00 and 1:00 and on Sunday and Monday at 7:30 and 9:30. You should go there. You should have your friends go there. You should ;help prove to the world that there is a fantastic untapped market for Independent Films. Support the New Cinema. Support the WSU Cinema Guild. Support anything else that happens s Turn people on. Hip them to what can be done with film. Change Contemporary Community Standar ds. Make "Flaming Creatures" a Saturday Matinee short, sandwiched in between two Donald Ducks and a Road Runner, You can do it, you know. The Ann Arbor Film Festival should be happening about the time that this hits the streets. From Wednesday, March 6 to Sunday March 10 they're going to be showing flicks in the Architecture Auditorium at U. of M. at 7:30 and 9:30. Dig it. It's one of the best festivals in the world. It's been going on for six years now. It really shouldn't be missed. After all when something as big as the Ann Arbor Festival is going on 60 miles away, you really haven't got any excuse for not going. After kind of scanning this column to this point I've decided that if you're still with me, you must be as crazy as I am. Therefore I can stop beating around the bush and come down to biass tacks. Make a film. It's easy. Make it in your head. Get it all together. Make it simple, simple films are always so much better and effective. Sleep on it. Rap on it. Figure it out. Then, and here comes the easy part, get a camera and some film and do it. Don't hassle the technical things. You can get a book from the library. The Detroit Main Library has a fantastic collection of books from England that teil you everything you need to know and more. And the only way you can really find out is to do it. And then, once you've made it: dig it. Show it to your friends. Stash it. Run across.it. Dig it again. Notice how bad it is. But notice all of the things it tells you about yourself. Or more specifically, about the you who made the film (after all he doe.gn't exist any more --you made the film). iNext: thing you know, you're hooked. And even if you never make another film, except in your head, you'll be able to start to actually dig underground films, You can understand them without having made a film. But there's a whole level, a whole slu of levéis, that you are totally unaware of, until you've seen a film you've made six months or so after you've made it. Then you start to realize what the film maker is actually saying. You realize all of the things that exist outside the film. Thé things that made the film. For, after all, they are the film. Yessir folks. Expand your consciousness. Make your hair thicker and your teeth grow back. Leary says it's in acid. Lot of people say it's in grass. The Beatles say it's in the Maharashi. The Maharashi says it's in transcendental Meditation. I say it's in film. Who are you going to believe? ? What if we 're all right? Where do you think it is? You're right, you know. If you were totally enthralled as you read this column, I'd like to take this opportunity to turn you back to your environment, while you select something else in this paper to read. If, however, you were just scanning it, this isn't necessary. (A last minute note - the Studio Theatre, at Livernois near Davison, begins a regular program of underground films on Thursday, March 7 with Andy Warhol's "My Hustler". Cali them for exact time