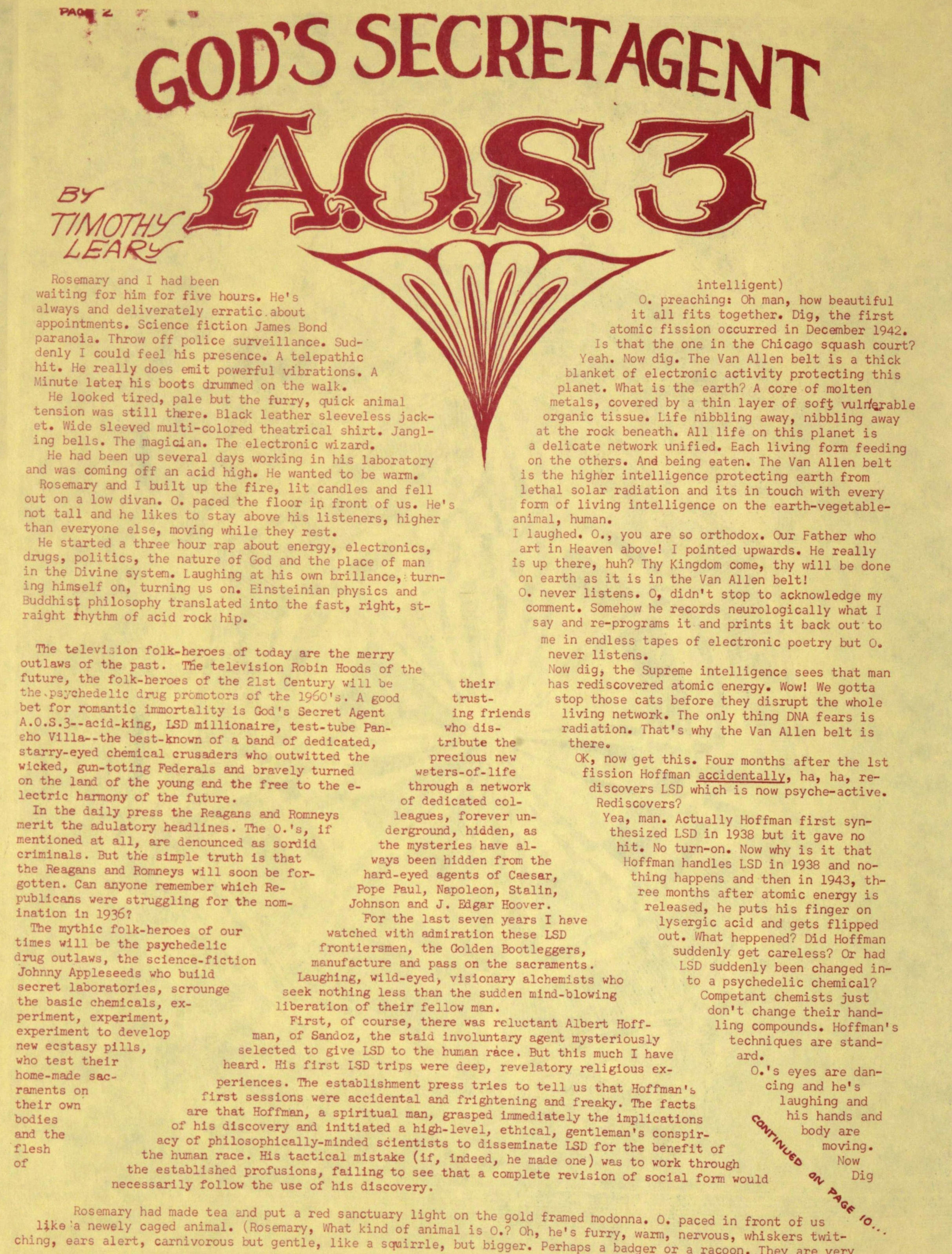 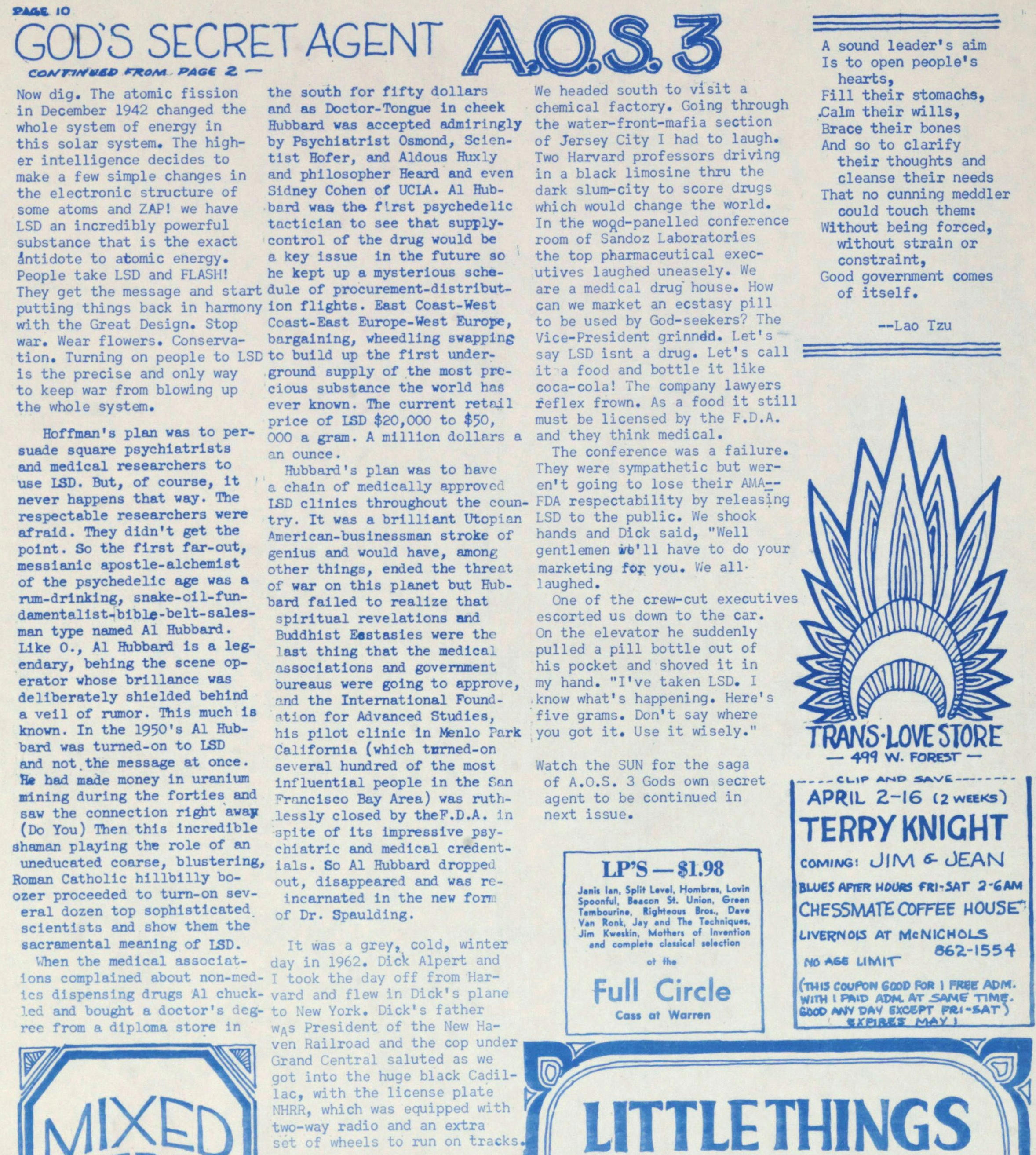 Rosemary and I had been waiting for him for five hours. He's always and deliverately erratic about appointments. Science fiction James Bond paranoia. Throw of police surveillance. Suddenly I could feel his presence. A telepathic hit. He really does emit powerful vibrations. A minute later his boots drummed on the walk.

He had been up several days working in his laboratory and was coming off an acid high. He wanted to be warm. Rosemary and I built up the fire, lit candles and fell out on a low divan. O. paced the floor in front of us. He's not tall and he likes to stay above his listeners, higher than everyone else, moving while they rest.

He started a three hour rap about energy, electronics, drugs, politics, the nature of God and the place of man in the Divine system. Laughing at his own brilliance, turning himself on, turning us on. Einsteinian physics and Buddhist philosophy translated into the fast, right, straight rhythm of acid rode hip.

The television folk-heroes of today are the merry outlaws of the past. The television Robin Hoods of the future, the folk-heroes of the gist Century will be the.psychedelic drug promoters of the 1960's. A good bet for romantic immortality is God 's Secret Agent A.0.S.3--acid-king, LSD millionaire, test-tube Pancho Villa--the best-known of a band of dedicated, starry-eyed chemical crusaders who outwitted the wicked, gun-toting Federals and bravely turned on the land of the young and the free to the electric harmony of the future.

The mythic folk-heroes of our times will be the psychedelic drug outlaws, the science-fiction Johnny Appleseeds who build secret laboratories, scrounge the basic chemicals, experiment, experiment, experiment to develop new ecstasy pills, who test their home-made sacraments on their own bodies and the flesh of their trusting friends who distribute the precious new waters-of-life through a network of dedicated leagues, forever underground, hidden, as the mysteries have always been hidden from the hard-eyed agents of Caesar, Pope Paul, Napoleon, Stalin, Johnson and J. Edgar Hoover.

For the last seven years I have watched with admiration these LSD frontiersmen, the Golden Bootleggers, manufacture and pass on the sacraments. Laughing, wild-eyed, visionary alchemists who seek nothing less than the sudden mind-blowing liberation of their fellow man.

First, of course, there was reluctant Albert Hoffman, of Sandoz, the staid involuntary agent mysteriously selected to give LSD to the human race. But this much I have heard. His first LSD trips were deep, revelatory religious experiences. The establishment press tries to tell us that Hoffman's first sessions were accidental and frightening and freaky. The facts are that Hoffman, a spiritual man, grasped immediately the implications of his discovery and initiated a high-level, ethical, gentleman's conspiracy of philosophically-minded scientists to disseminate LSD for the benefit of the human race. His tactical mistake (if, indeed, he made one) was to work through the eatablished profusions, failing to see that a complete revision of social form would necessarily follow the use of his discovery.

Rosemary had made tea and put a red sanctuary light on the gold framed modonna. O. paced in front of us like a newly caged animal. (Rosemary, What kind of animal is O.? Oh, he's furry, warm nervous whiskers twitching, ears alert, carnivorous but gentle, like a squirrel, but bigger. Perhaps a badger a racoon. They are very intelligent)

O. preaching: Oh man, how beautiful it all fits together. Dig, the first atomic fission occurred in December 1942. Is that the one in the Chicago squash court? Yeah. Now dig. The Van Allen belt is a thick blanket of electronic activity protecting this planet. What is the earth? A core of molten metals, covered by a thin layer of soft vulnerable organic tissue. Life nibbling away, nibbling away at the rock beneath. All life on this planet is a delicate network unified. Each living form feeding on the others. And being eaten. The Van Allen belt is the higher intelligence protecting earth from lethal solar radiation and its in touch with every form of living intelligence on the earth-vegetable-animal, human.

I laughed. O., you are so orthodox. Our Father who art in Heaven above! I pointed upwards. He really is up there, huh? Thy Kingdom come, thy will be done on earth as it is in the Van Allen belt!

O. never listens. O, didn't stop to acknowledge my comment. Somehow he records neurologically what I say and re-programs it and prints it back out to me in endless tapes of electronic poetry but O. never listens.

Now dig, the Supreme intelligence sees that man has rediscovered atomic energy. Wow! We gotta stop those cats before they disrupt the whole living network. The only thing DNA fears is radiation. That's why the Van Allen belt is there.

Yea, man. Actually Hoffman first synthesized LSD in 1938 but it gave no hit. No turn-on. Now why is it that Hoffman handles LSD in 1938 and nothing happens and then in 1943, three months after atomic energy is released, he puts his finger on lysergic acid and gets flipped out. What happened? Did Hoffman suddenly get careless? Or had LSD suddenly been changed into a psychedelic chemical? Competant chemists just don't change their handling compounds. Hoffman's techniques are standard.

O.'s eyes are dancing and he's laughing and his hands and body are moving. Now Dig

Now dig. The atomic fission in December 1942 changed the whole system of energy in this solar system. The higher intelligence decides to make a few simple changes in the electronic structure of some atoms and ZAP! we have LSD an incredibly powerful substance that is the exact antidote to atomic energy. People take LSD and FLASH! They get the message and start i putting things back in harmony with the Great Design. Stop war. Wear flowers. Conservation. Turning on people to LSD is the precise and only way to keep war from blowing up the whole system.

Hoffman's plan was to persuade square psychiatrists and medical researchers to use LSD. But, of course, it never happens that way. The respectable researchers were afraid. They didn't get the point. So the first far-out, messianic apostle-alchemist of the psychedelic age was a rum-drinking, snake-oil-fundamentalist-bible-belt-salesman type named Al Hubbard . Like O., Al Hubbard is a legendary, behind the scene operator whose brilliance was deliberately shielded behind a veil of rumor. This much is known. In the 1950 's Al Hubbard was turned-on to LSD and not the message at once. He had made money in uranium mining during the forties and saw the connection right away (Do You) Then this incredible shaman playing the role of an uneducated coarse, blustering, Roman Catholic hillbilly boozer proceeded to turn-on several dozen top sophisticated scientists and show them the sacramental meaning of LSD.

When the medical associations complained about non-medics dispensing drugs Al chuckled and bought a doctor 's degree from a diploma store in the south for fifty dollars and as Doctor-Tongue in cheek Hubbard was accepted admiringly by Psychiatrist Osmond, Scientist Hofer, and Aldous Huxly and philosopher Heard and even Sidney Cohen of UCLA. Al Hubbard was the first psychedelic tactician to see that supply-control of the drug would be a key issue in the future so he kept up a mysterious schedule of procurement-distribution flights. East Coast-West Coast-East Europe-West Europe, bargaining, wheedling swapping to build up the first underground supply of the most precious substance the world has ever known. The current retail price of LSD $20,000 to $50,000 a gram. A million dollars an ounce.

Hubbard's plan was to have a chain of medically approved LSD clinics throughout the country. It was a brilliant utopian American-businessman stroke of genius and would have, among other things, ended the threat of war on this planet but Hubbard failed to realize that spiritual revelations and Buddhist Eastasies were the last thing that the medical associations and government bureaus were going to approve, and the International Foundation for Advanced Studies, his pilot clinic in Menlo Park California (which turned-on several hundred of the most influential people in the San Francisco Bay Area) was ruthlessly closed by the F.D.A. in spite of its impressive psychiatric and medical credentials. So Al Hubbard dropped out, disappeared and was incarnated in the new form of Dr. Spaulding.

It was a grey, cold, winter day in 1962. Dick Alpert and I took the day off from Harvard and flew in Dick's plane to New York. Dick's father was President of the New Haven Railroad and the cop under Grand Central saluted as we got into the huge black Cadillac, with the license plate NHRR, which was equipped with two-way radio and an extra set of wheels to run on tracks. We headed south to visit a chemical factory. Going through the water-front-mafia section of Jersey City I had to laugh. Two Harvard professors driving in a black limosine thru the dark slum-city to score drugs which would change the world. In the wood-panelled conference room of Sandoz Laboratories the top pharmaceutical executives laughed uneasely. We are a medical drug house. How can we market an ecstasy pill to be used by God-seekers? The Vice-President grinned. Let's say LSD isnt a drug. Let's call it a food and bottle it like coca-cola! The company lawyers reflex frown. As a food it still must be licensed by the F.D.A. and they think medical.

The conference was a failure. They were sympathetic but weren't going to lose their AMA-FDA respectability by releasing LSD to the public. We shook hands and Dick said, "Well gentlemen we'll have to do your marketing for you. We all laughed.

One of the crew-cut executives escorted us down to the car. On the elevator he suddenly pulled a pill bottle out of his pocket and shoved it in my hand. "I've taken LSD. I know what's happening. Here's five grams. Don't say where you got it. Use it wisely."

Watch the SUN for the saga of A.O.S. 3 Gods own secret agent to be continued in next issue.

Is to open people's hearts,

And so to clarify

That no cunning meddler

without strain or constraint,

Good government comes of itself.