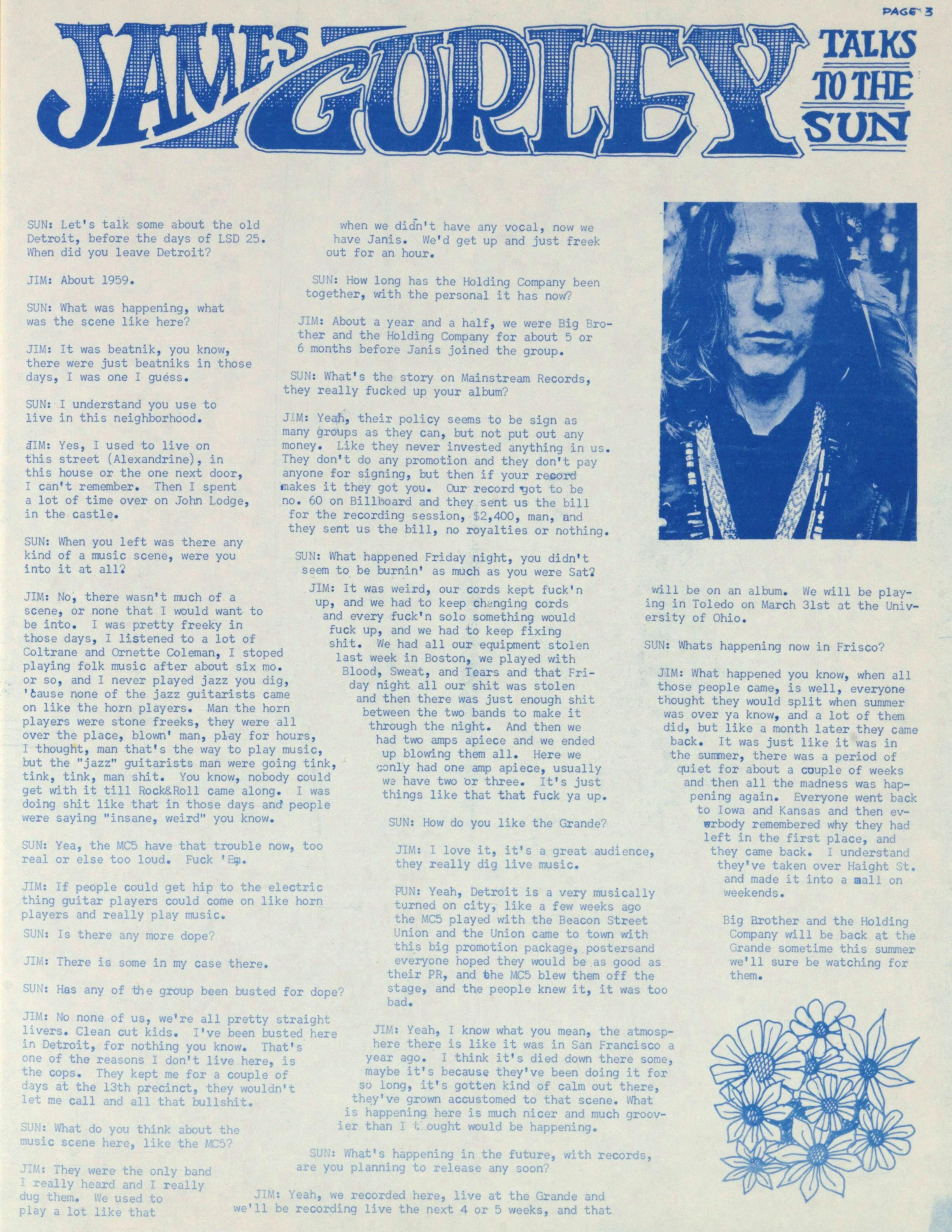 JAMES GURLEY TALKS TO THE SUN

SUN: Let's talk some about the old Detroit, before the days of LSD 25. When did you leave Detroit?

SUN: What was happening, what was the scene like here?

JIM: It was beatnik, you know, there were just beatniks in those days, I was one I guess.

SUN: I understand you use to live in this neighborhood.

JlM: Yes, I used to live on this street (Alexandrine), in this house or the one next door, I can't remember. Then I spent a lot of time over on John Lodge, in the castle.

SUN: When you left was there any kind of a music scene, were you into it at all?

JIM: No, there wasn't much of a scene, or none that I would want to be into. I was pretty freeky in those days, I listened to a lot of Coltrane and Ornette Coleman, I stoped playing folk music after about six mo. or so, and I never played jazz you dig, 'cause none of the jazz guitarists came on like the hrn players. Man the horn players were stone freeks, they were all over the place, blown' man, play for hours, I thought, man that's the way to play music, but the "jazz" guitarists man were going tink, tink, tink, man shit. You know, nobody could get with it till Rock&Roll came along. I was doing shit like that in those days and people were saying "insane, weird" you know.

SUN: Yea, the MC5 have that trouble now, too real or else too loud. Fuck 'Em.

JIM: If people could get hip to the electric thing guitar players could come on like horn players and really play music.

SUN: Is there any more dope?

JIM: There is some in my case there.

SUN: Has any of the group been busted for dope?

JIM: No none of us, we're all pretty straight livers. Clean cut kids. I've been busted here in Detroit, for nothing you know. That's one of the reasons I don't live here, is the cops. They kept me for a couple of days at the 13th precinct, they wouldn't let me call and all that bullshit.

SUN: What do you think about the music scene here, like the MC5?

JIM: They were the only band I really heard and I really dug them. We used to play a lot like that when we didn't have any vocal, now we have Janis. We'd get up and just freek out for an hour.

SUN: How long has the Holding Company been together, with the personal it has now?

JIM: About a year and a half, we were Big Brother and the Holding Company for about 5 or 6 months before Janis joined the group.

SUN: What's the story on Mainstream Records, they really fucked up your album?

JIM: Yeah, their policy seems to be sign as many groups as they can, but not put out any money. Like they never invested anything in us. They don't do any promotion and they don't pay anyone for signing, but then if your record makes it they got you. Our record rjot to be no. 60 on Billboard and they sent us the bill for the recording session, $2,400, man, and they sent us the bill, no royalties or nothing.

SUN: What happened Friday night, you didn't seem to be burnin' as much as you were Sat?

JIM: It was weird, our cords kept fuck'n up, and we had to keep changing cords and every fuck'n solo something would fuck up, and we had to keep fixing shit. We had all our equipment stolen last week in Boston, we played with Blood, Sweat, and Tears and that day night all our shit was stolen and then there was just enough shit between the two bands to make it through the night. And then we had two amps apiece and we ended up blowing them all. Here we only had one amp apiece, usually we have two or three. It's just things like that that fuck ya up.

JIM: I love it, it's a great audience, they really dig live music.

SUN: Yeah, Detroit is a very musically turned on city, like a few weeks ago the MC5 played with the Beacon Street Union and the Union came to town with this big promotion package, posters and everyone hoped they would be as good as their PR, and the MC5 blew them off the stage, and the people knew it, it was too bad.

JIM: Yeah, I know what you mean, the atmosphere there is like it was in San Francisco a year ago. I think it's died down there some, maybe it's because they've been doing it for so long, it's gotten kind of calm out there, they've grown accustomed to that scene. What is happening here is much nicer and much groovier than I thought would be happening.

SUN: What's happening in the future, with records, are you planning to release any soon?

JIM: Yeah, we recorded here, live at the Grande and we'll be recording live the next 4 or 5 weeks, and that will be on an album. We will be playing in Toledo on March 31st at the University of Ohio.

JIM: What happened you know, when all those people came, is well, everyone thought they would split when summer was over ya know, and a lot of them did, but like a month later they came back. It was just like it was in the summer, there was a period of quiet for about a couple of weeks and then all the madness was happening again. Everyone went back to Iowa and Kansas and then everybody remembered why they had left in the first place, and they came back. I understand they've taken over Haight St. and made it into a mall on weekends.

Big Brother and the Holding Company will be back at the Grande sometime this summer we'll sure be watching for them.