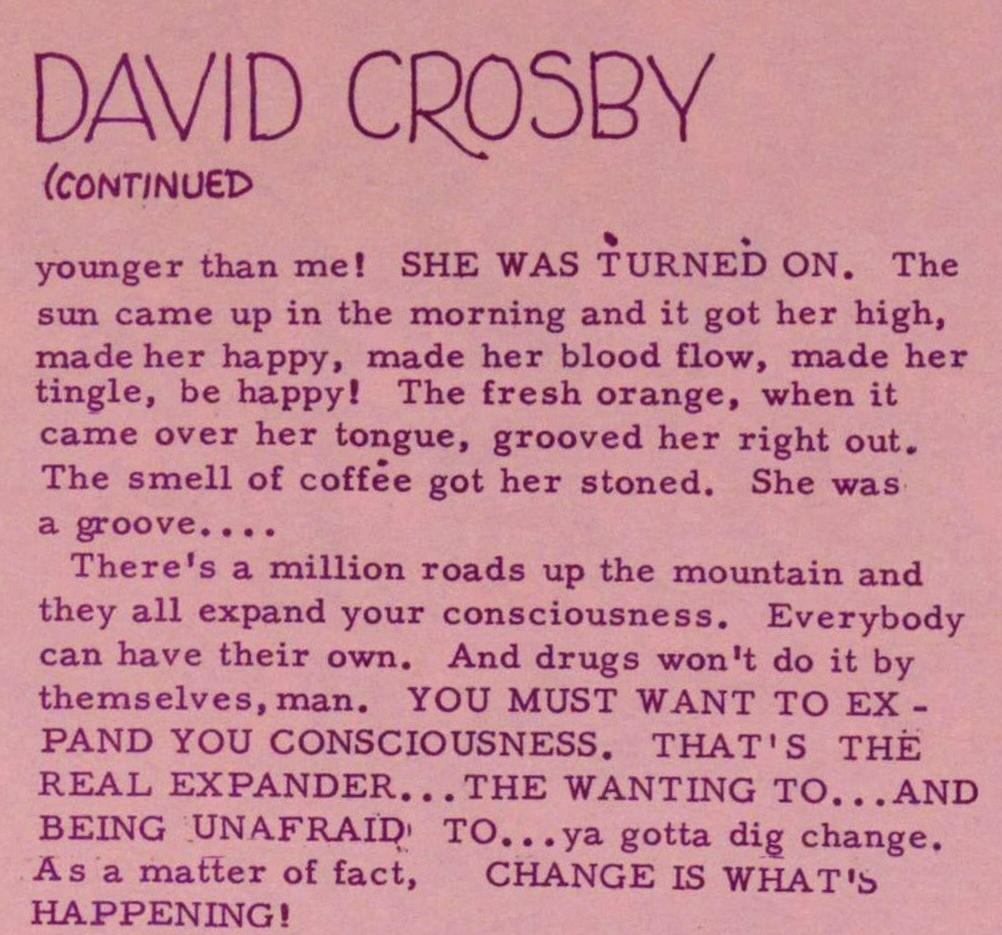 REPRINTEP FR6M THE OWCUE OP 5blTHEl?N CAUFúENlA Note: David Crosby was the lead singer of one of pop music's most successful and influential groups, The Byrds. The following comments are excerpted írom a long tape he made and transcribed. I smoke pot, which helps, and once every two or three months I take an acid trip, which also helps. It clears the deck and shakes everything up and loosens up the whole thing and keeps it from getting too static. It seems to have a salutory effect; I can't really define what it does, because we don't have words yet for most of what goes on in a trip. That's not to say that we should because things are like soap bubbles; trying to put it into words would be like trying to handle soap bubbles with iron gloves. It doesn't work. If you brought them down to a verbal state of consciousness they would shatter and fade and disappear like dreams do when you wake up. I would rather keep them where they are. I get high a lotta different ways, mostly on myself; a lot on music, a lot on making love, when I'm lucky I'm sailing, playing my guitar; talking to people, drugs, groovy foods, making love, making love, making love as often as possible, which isn't all of the time. That's not easy to say that I'm some weird kind of freak who fucks ten times a day, or something. When it happens it's a groove. I get high on everything I can, man and I'm trying to get high on.everything. Buddha and Christ and Shiva and Krishna and Mohammad and everybody all seem to say that you shQulH get high on the flowers and on yourself and on making love and you ARE love, and thou art God, and God grows, and the grass is God and the grass grows, and everything is IT, and if you get into it the whole universe is yours: playground, playpen, universe! Any label makes it small, puts fences up. The whole universe is your home if you can get big enough to live there. You just have to get big enough. . . . I see President Johnson aud these other cats with huge monster egos walking around like grunting gladiators in a ring, man! They don't realize that the world is the size of a golf ball; there isn't room to do that anymore. It is like six cats in a closet; each has a hand grenade and thay hate each other, anybody pulls the pin, they all get it! It's not a war, it's just a bad scène. We've gat to find some way to cool out all the egos. Not just President Johnson's, but mine and everybody else's, a lot more than we've been doing. Maybe my children will know how to do it if I don't teach them all that repressive stuff. Excuse me, but I get high and I think it's a groove. I'm not trying to blow your mind or fuck with you, or inflict it on you. I'm not telling YOU to get high, but I'm stoned. That's the only political ethic in all the people I know. It's based on the Golden Rule, "Don't mess with me, ,and I won 't mess with you, and you live any way you want, and please let me live the way I want and don't inflict your thing on me and I won't inflict my thing on you. " It's the only political . ethic that they will accept. We must find some way to cool out the people who f e el they must inflict their way on us. . . . People who don't dig change as a way of life are soon going to watch their world changing so fast around them that they will have to go out to Sunnyland Acres in the middle of the desert and play bridge, and ignore the world and pretend those rocket ships are not going over their house or go crazy and flip out and kill themselves. That's what an awful lot of people are going to do in the next ten years, old people. "Old people" does not necessarily mean age'chronologically because age is an attitude. I know some very old fifteen-year-olds who bougnt the Oitnge County number and are forty already. And 1 know some other kids from the same place who are very young and very beautiful and very alive and they're seventy-five or eighty. I met an old farm lady in New Hampshire who's one of the hippest, most aware, most ALIVE, VIBRANTLY GROOVY PEOPLE I HAVE EVER MET in my life and she's eighty -twol She's (coñtínued on page lij DAVID CROSBY CCONrNULl younger than me! SHE WAS TURNED ON. The sun carne up in the morning and it got her high, made her happy, made her blood flow, made her tingle, be happy! The fresh orange, when it came over her tongue, grooved her right out. The smell of coffêe got her stoned. She was a groove. . . . There's a million roads up the mountain and they all expand your consciousness. Everybody can have their own. And drugs won't do it by themselves.man. YOU MUST WANT TO EX - PAND YOU CONSCIOUSNESS. THAT'S THÉ REAL EX PANDER... THE WANTING TO...AND BEING UNA.FRAÏD' TO. . .ya gotta dig change. Asa matter of fact, CHANGE IS WHAT'b HAPPENING!