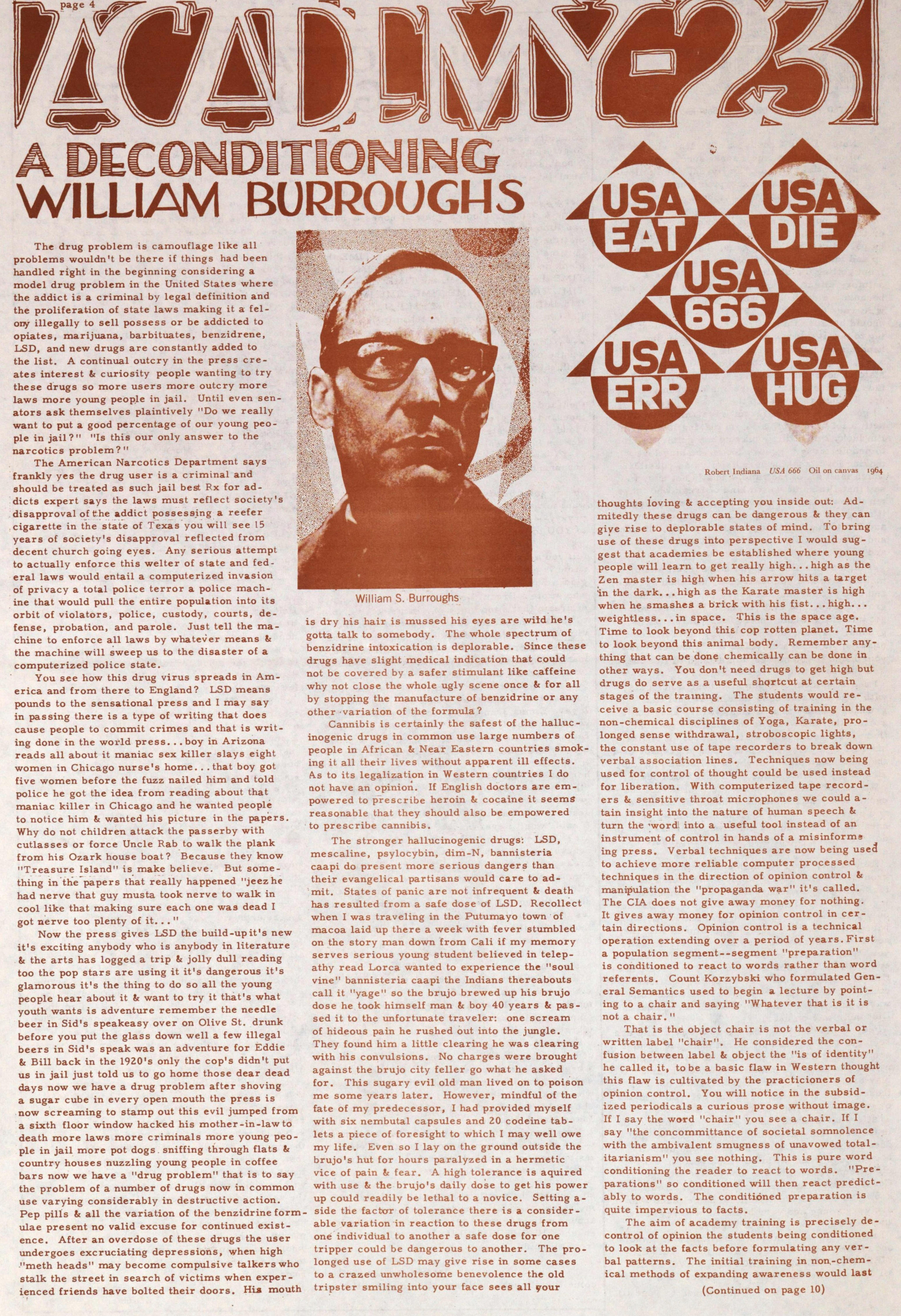 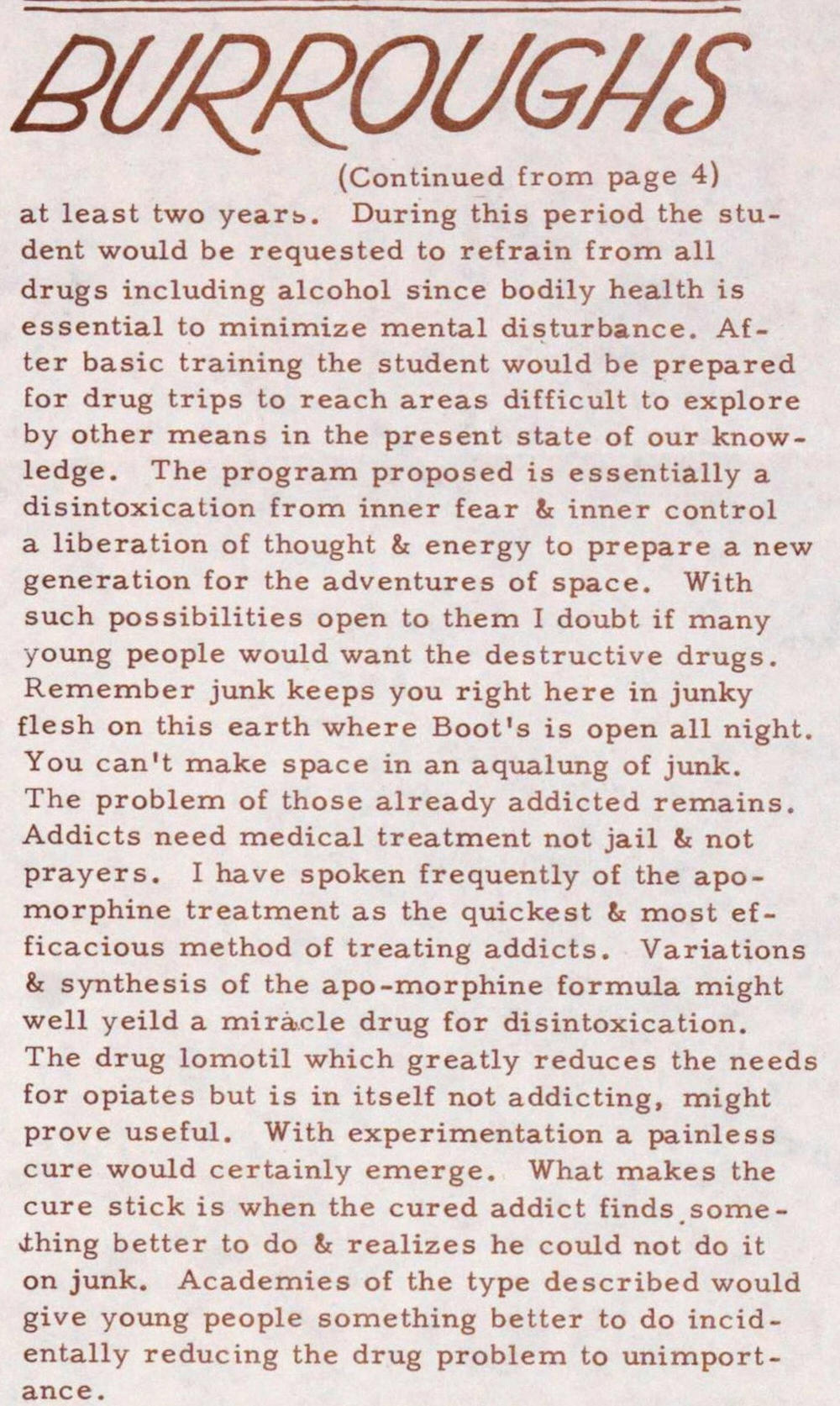 The drug problem is camouflage like all problems wouldn't be there if things had been handled right in the beginning considering a model drug problem in the United States where the addict is a criminal by legal definition and the proliferation of state laws making it a felony illegally to sell possess or be addicted to opiates, marijuana, barbituates, benzidrene, LSD, and new drugs are constantly added to the list. A continual outcry in the press creates interest & curiosity people wanting to try these drugs so more users more outcry more laws more young people in jail. Until even senators ask themselves plaintively "Do we really want to put a good percentage of our young people in jail?" "Is this our only answer to the narcotics problem?"

The American Narcotics Department says frankly yes the drug user is a criminal and should be treated as such jail best Rx for addicts expert says the laws must reflect society's disapproval of the addict possessing a reefer cigarette in the state of Texas you will see 15 years of society's disapproval reflected from decent church going eyes. Any serious attempt to actually enforce this welter of state and federal laws would entail a computerized invasion of privacy a total police terror a police machine that would pull the entire population into its orbit of violators, police, custody, courts, defense, probation, and parole. Just tell the machine to enforce all laws by whatever means & the machine will sweep us to the disaster of a computerized police state.

You see how this drug virus spreads in America and from there to England? LSD means pounds to the sensational press and I may say in passing there is a type of writing that does cause people to commit crimes and that is writing done in the world press. . .boy in Arizona reads all about it maniac sex killer slays eight women in Chicago nurse's home. . .that boy got five women before the fuzz nailed him and told police he got the idea trom reading about that maniac killer in Chicago and he wanted people to notice him & wanted his picture in the papers. Why do not children attack the passerby with cutlasses or force Uncle Rab to walk the plank from his Ozark house boat? Because they know "Treasure Island" is make believe. But something in the papers that really happened "jeez he had nerve that guy musta took nerve to walk in cool like that making sure each one was dead I got nerve too plenty of it. . . "

Now the press gives LSD the build-up it's new it's exciting anybody who is anybody in literature & the arts has logged a trip & jolly dull reading too the pop stars are using it it's dangerous it's glamorous it's the thing to do so all the young people hear about it & want to try it that 's what youth wants is adventure remember the needle beer in Sid's speakeasy over on Olive St. drunk before you put the glass down well a few illegal beers in Sid's speak was an adventure for Eddie & Bill back in the 1920's only the cop's didn't put us in jail just told us to go home those dear dead days now we have a drug problem after shoving a sugar cube in every open mouth the press is now screaming to stamp out this evil jumped from a sixth floor window hacked his mother-in-law to death more laws more criminals more young people in jail more pot dogs sniffing through flats & country houses nuzzling young people in coffee bars now we have a "drug problem" that is to say the problem of a number of drugs now in common use varying considerably in destructive action. Pep pills & all the variation of the benzidrine formulae present no valid excuse for continued existence. After an overdose of these drugs the user undergoes excruciating depressions, when high "meth heads" may become compulsive talkers who stalk the street in search of victims when experienced friends have bolted their doors. His mouth is dry his hair is mussed his eyes are wild he's gotta talk to somebody. The whole spectrum of benzidrine intoxication is deplorable. Since these drugs have slight medical indication that could not be covered by a safer stimulant like caffeine why not close the whole ugly scene once & for all by stopping the manufacture of benzidrine or any other variation of the formula?

Cannibis is certainly the safest of the hallucinogenic drugs in common use large numbers of people in African & Near Eastern countries smoking it all their lives without apparent ill effects. As to its legalization in Western countries I do not have an opinion. If English doctors are empowered to prescribe heroin & cocaine it seems reasonable that they should also be empowered to prescribe cannibis.

The stronger hallucinogenic drugs: LSD, mescaline, psylocybin, dim-N, bannisteria caapi do present more serious dangers than their evangelical partisans would care to admit. States of panic are not infrequent & death has resulted from a safe dose of LSD. Recollect when I was traveling in the Putumayo town of macoa laid up there a week with fever stumbled on the story man down from Cali if my memory serves serious young student believed in telepathy read Lorca wanted to experience the "soul vine" bannisteria caapi the Indians thereabouts cali it "yage" so the brujo brewed up his brujo dose he took himself man & boy 40 years & passed it to the unfortunate traveler: one scream of hideous pain he rushed out into the jungle. They found him a little clearing he was clearing with his convulsions. No charges were brought against the brujo city feller go what he asked for. This sugary evil old man lived on to poison me some years later. However, mindful of the fate of my predecessor, I had provided myself with six nembutal capsules and 20 codeine tablets a piece of foresight to which I may well owe my life. Even so I lay on the ground outside the brujo's hut for hours paralyzed in a hermetic vice of pain & fear. A high tolerance is aquired with use & the brujo's daily dose to get his power up could readily be lethal to a novice. Setting aside the factor of tolerance there is a considerable variation in reaction to these drugs from one individual to another a safe dose for one tripper could be dangerous to another. The prolonged use of LSD may give rise in some cases to a crazed unwholesome benevolence the old tripster smiling into your face sees all your thoughts loving & accepting you inside out: Admitedly these drugs can be dangerous & they can give rise to deplorable states of mind. To bring use of these drugs into perspective I would suggest that academies be established where young people will learn to get really high. . . high as the Zen master is high when his arrow hits a target in the dark. . .high as the Karate master is high when he smashes a brick with his fist. . . high. . . weightless. . .in space. This is the space age. Time to look beyond this cop rotten planet. Time to look beyond this animal body. Remember anything that can be done chemically can be done in other ways. You don't need drugs to get high but drugs do serve as a useful shortcut at certain stages of the training. The students would receive a basic course consisting of training in the non-chemical disciplines of Yoga, Karate, prolonged sense withdrawal, stroboscopic lights, the constant use of tape recorders to break down verbal association lines. Techniques now being used for control of thought could be used instead for liberation. With computerized tape recorders & sensitive throat microphones we could attain insight into the nature of human speech & turn the word into a useful toot instead of an instrument of control in hands of a misinforms ing press. Verbal techniques are now being used to achieve more reliable computer processed techniques in the direction of opinion control & manipulation the "propaganda war" it's called. The CIA does not give away money for nothing. It gives away money for opinion control in certain directions. Opinion control is a technical operation extending over a period of years. First a population segment - segment "preparation" is conditioned to react to words rather than word referents. Count Korzybski who formulated General Semantics used to begin a lecture by pointing to a chair and saying "Whatever that is it is not a chair. "

That is the object chair is not the verbal or written label "chair". He considered the confusion between label & object the "is of identity" he called it, to be a basic flaw in Western thought this flaw is cultivated by the practitioners of opinion control. You will notice in the subsidized periodicals a curious prose without image. If I say the word "chair" you see a chair. If I say "the concommittance of societal somnolence with the ambivalent smugness of unavowed totalitarianism" you see nothing. This is pure word conditioning the reader to react to words. "Preparations" so conditioned will then react predictably to words. The conditioned preparation is quite impervious to facts.

The aim of academy training is precisely decontrol of opinion the students being conditioned to look at the facts before formulating any verbal patterns. The initial training in non-chemical methods of expanding awareness would last (Continued on page 10)

at least two years. During this period the student would be requested to refrain from all drugs including alcohol since bodily health is essential to minimize mental disturbance. After basic training the student would be prepared for drug trips to reach areas difficult to explore by other means in the present state of our knowledge. The program proposed is essentially a disintoxication from inner fear & inner control a liberation of thought & energy to prepare a new generation for the adventures of space. With such possibilities open to them I doubt if many young people would want the destructive drugs. Remember junk keeps you right here in junky flesh on this earth where Boot's is open all night. You can't make space in an aqualung of junk. The problem of those already addicted remains. Addicts need medical treatment not jail & not prayers. I have spoken frequently of the apomorphine treatment as the quickest & most efficacious method of treating addicts. Variations & synthesis of the apomorphine formula might well yield a miracle drug for disintoxication. The drug lomotil which greatly reduces the needs for opiates but is in itself not addicting, might prove useful. With experimentation a painless cure would certainly emerge. What makes the cure stick is when the cured addict finds something better to do & realizes he could not do it on junk. Academies of the type described would give young people something better to do incidentally reducing the drug problem to unimportance.