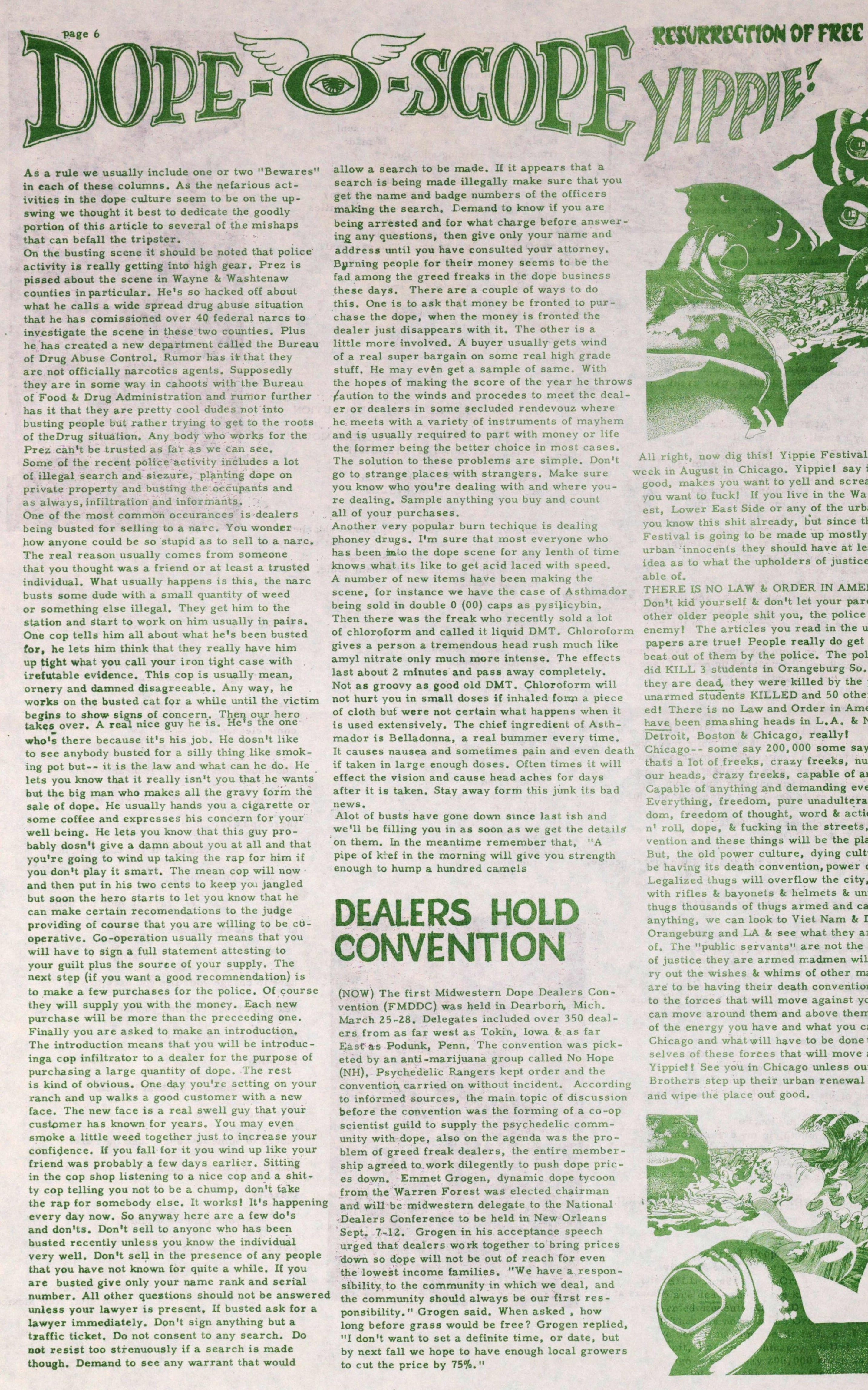 As a rule we usually include one or two "Bewares" in each of these columns. As the nefarious activities in the dope culture seem to be on the upswing we thought it best to dedicate the goodly portion of this article to several of the mishaps that can befall the tripster.

On the busting scene it should be noted that police activity is really getting into high gear. Prez is pissed about the scene in Wayne & Washtenaw counties in particular. He's so hacked off about what he calls a wide spread drug abuse situation that he has commissioned over 40 federal narcs to investigate the scene in these two counties. Plus he has created a new department called the Bureau of Drug Abuse Control. Rumor has it that they are not officially narcotics agents. Supposedly they are in some way in cahoots with the Bureau of Food & Drug Administration and rumor further has it that they are pretty cool dudes not into busting people but rather trying to get to the roots of the Drug situation. Anybody who works for the Prez can't be trusted as far as we can see. Some of the recent police activity includes a lot of illegal search and seizure, planting dope on private property and busting the occupants and as always, infiltration and informants.

One of the most common occurrences is dealers being busted for selling to a narc. You wonder how anyone could be so stupid as to sell to a narc. The real reason usually comes from someone that you thought was a friend or at least a trusted individual. What usually happens is this, the narc busts some dude with a small quantity of weed or something else illegal. They get him to the station and start to work on him usually in pairs. One cop tells him all about what he's been busted for, he Iets him think that they really have him up tight what you call your iron tight case with irrefutable evidence. This cop is usually mean, ornery and damned disagreeable. Any way, he works on the busted cat for a while until the victim begins to show signs of concern. Then our hero takes over. A real nice guy he is. He's the one who's there because it's his job. He doesn't like to see anybody busted for a silly thing like smoking pot-- it is the law and what can he do. He lets you know that it really isn't you that he wants but the big man who makes all the gravy from the sale of dope. He usually hands you a cigarette or some coffee and expresses his concern for your well being. He lets you know that this guy probably doesn't give a damn about you at all and that you're going to wind up taking the rap for him if you don't play it smart. The mean cop will now and then put in his two cents to keep you jangled but soon the hero starts to let you know that he can make certain recommendations to the judge providing of course that you are willing to be cooperative. Co-operation usually means that you will have to sign a full statement attesting to your guilt plus the source of your supply. The next step (if you want a good recommendation) is to make a few purchases for the police. Of course they will supply you with the money. Each new purchase will be more than the preceeding one. Finally you are asked to make an introduction. The introduction means that you will be introducing a cop infiltrator to a dealer for the purpose of purchasing a large quantity of dope. The rest is kind of obvious. One day you're setting on your ranch and up walks a good customer with a new face. The new face is a real swell guy that your customer has known for years. You may even smoke a little weed together just to increase your confidence. If you fall for it you wind up like your friend was probably a few days earlier. Sitting in the cop shop listening to a nice cop and a shitty cop telling you not to be a chump, don't take the rap for somebody else. It works! It's happening every day now. So anyway here are a few do's and don'ts. Don't sell to anyone who has been busted recently unless you know the individual very well. Don't sell in the presence of any people that you have not known for quite a while. If you are busted give only your name rank and serial number. All other questions should not be answered unless your lawyer is present. If busted ask for a lawyer immediately. Don't sign any thing but a traffic ticket. Do not consent to any search. Do not resist too strenuously if a search is made though. Demand to see any warrant that would allow a search to be made. If it appears that a search is being made illegally make sure that you get the name and badge numbers of the officers making the search. Demand to know if you are being arrested and for what charge before answering any questions, then give only your name and address until you have consulted your attorney. Burning people for their money seems to be the fad among the greed freaks in the dope business these days. There are a couple of ways to do this. One is to ask that money be fronted to purchase the dope, when the money is fronted the dealer just disappears with it. The other is a little more involved. A buyer usually gets wind of a real super bargain on some real high grade stuff. He may even get a sample of same. With the hopes of making the score of the year he throws caution to the winds and proceeds to meet the dealer or dealers in some secluded rendezvous where he meets with a variety of instruments of mayhem and is usually required to part with money or life the former being the better choice in most cases. The solution to these problems are simple. Don't go to strange places with strangers. Make sure you know who you're dealing with and where you're dealing. Sample anything you buy and count all of your purchases.

Another very popular burn technique is dealing phony drugs. I'm sure that most everyone who has been into the dope scene for any length of time knows what it's like to get acid laced with speed. A number of new items have been making the scene, for instance we have the case of Asthmador being sold in double 0 (00) caps as pysilicybin. Then there was the freak who recently sold a lot of chloroform and called it liquid DMT. Chloroform gives a person a tremendous head rush much like amyl nitrate only much more intense. The effects last about 2 minutes and pass away completely. Not as groovy as good old DMT. Chloroform will not hurt you in small doses if inhaled from a piece of cloth but we're not certain what happens when it is used extensively. The chief ingredient of Asthmador is Belladonna, a real bummer every time. It causes nausea and sometimes pain and even death if taken in large enough doses. Often times it will effect the vision and cause head aches for days after it is taken. Stay away from this junk, it's bad news.

A lot of busts have gone down since last ish and we'll be filling you in as soon as we get the details on them. In the meantime remember that, "A pipe of kief in the morning will give you strength enough to hump a hundred camels