Notes From The Underground 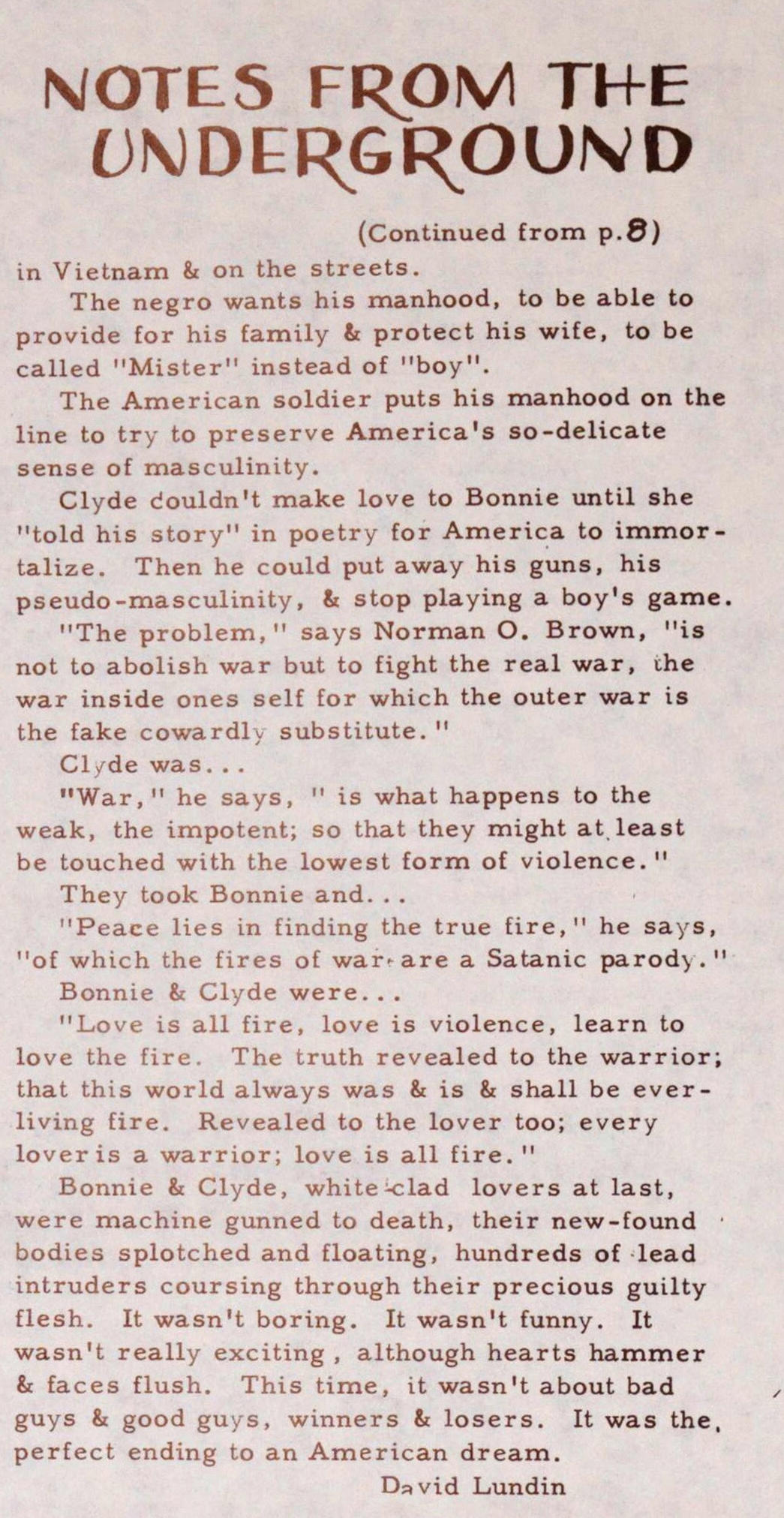 Have you seen Bonnie and Clyde? Rab Brown says violence is as American as cherry pie. (cherrie, not apple). Bonnie strokes the dark smooth metal of Clyde's revolver & inocently intones, "Geeeee." A looter grabs a case of Strohs, sprints out of the store, is shot down & dies with a surprised expression on his face. A meat cleaver slams deep into the grocery store counter, narrowl missing Clyde's wrist. "I was only trying to get us some food, " he says to Bonnie in bewilderment. "I didn't mean nobody no harm. " Sixteen hoods & four G-men get machine gunned on "The Untouchables" & everybody gets bored & after a while the show goes off the air. A clumsy Viet Cong in black pa jamas is shot from a tree & tears make dirty tracks down a little peasant girl's face. Buck Barrow writhes in the bloody pain of his death agony & Blanche shrieks & wails in her own red blindness. Two cop cars hound Bonnie & Clyde over sunny hill & dale, guns blazing to a bluegrass background, & everybody laughs. Rap Brown says, "Get whitey", & tells the white reporters to either pay the meeting dues or get out & everybod. stamps & whistles. The TV station signs off with the Star Spangled Banner as a backup for marching armies, screaming jets & blazing battleships, all superimposed on our waving flag. The late-night viewers are pround & silent. An American soldier lies in a Vietnam hospital, his bleeding neck reddening the bedsheets. "Where were you injured? " asks avisiting politician, George Romney. It is explained that he had been shot down on a helicopter rescue mission. "Good for ou, " says the presidential hopeful, "Good for ou. " Boniie & Clyde were lovers. "Do you have a girlfriend?" Romne asks a Marine whose right leg had been amputated. "Yes," the bedridden soldier replies without expression. A radio newscast: "Two US planes were downed yesterday while six new Cong MIG-21's were smashed earthward by US Phantom jets armed with infra-red homing Sidewinder missies. " "There I was starin1 in the face of death, " stammered the burglarized band teller, pointing to a Bonnie & Clyde bullet hole in the wall. Flash bulbs pop for the morning paper. "It's the ballot or the bullet, " says Malcom X. "IL we don't get our way with the ballot, we'll get it with the bullet. " On the average Saturday night maybe üfty bad guys & ten or so innocent bystanders die on the tube before the typical viewer goes to his well-deserved rest. This doesn't include those on the 11:00 newscast who die (cont. on page 10) NOTES FROM TT+E UNDERGROUND (Continued from p.8) in Vietnam & on the streets. The negro wants his manhood, to be able to provide for his family & protect his wife, to be called "Mister" instead of "boy". The American soldier puts his manhood on the line to try to preserve America's so-delicate sense of masculinity. Clyde douldn't make love to Bonnie until she "told his story" in poetry for America to immortalize. Then he could put away his guns, his pseudo-masculinity, & stop playing a boy's game. "The problem," says Norman O. Brown, "is not to abolish war but to fight the real war, the war inside ones self for which the outer war is the fake cowardly substitute. " Clde was. . . "War," he says, " is what happens to the weak, the impotent; so that they might at, least be touched with the lowest form of violence. " They took Bonnie and. . . "Peace lies in finding the true tire," he says, "of which the fires of warare a Satanic parod . " Bonnie & Clyde were. . . "Love is all fire, love is violence, learn to love the fire. The truth revealed to the warrior; that this world always was & is & shall be everliving fire. Revealed to the lover too; every lover is a warrior; love is all fire. " Bonnie & Clyde, white clad lovers at last, were machine gunned to death, their new-found bodies splotched and floating, hundreds of lead intruders coursing through their precious guilty flesh. It wasn't boring. It wasn't funny. It wasn't really exciting , although hearts hammer & faces flush. This time, it wasn't about bad , guys & good guys, winners & losers. It was the, perfect ending to an American dream.