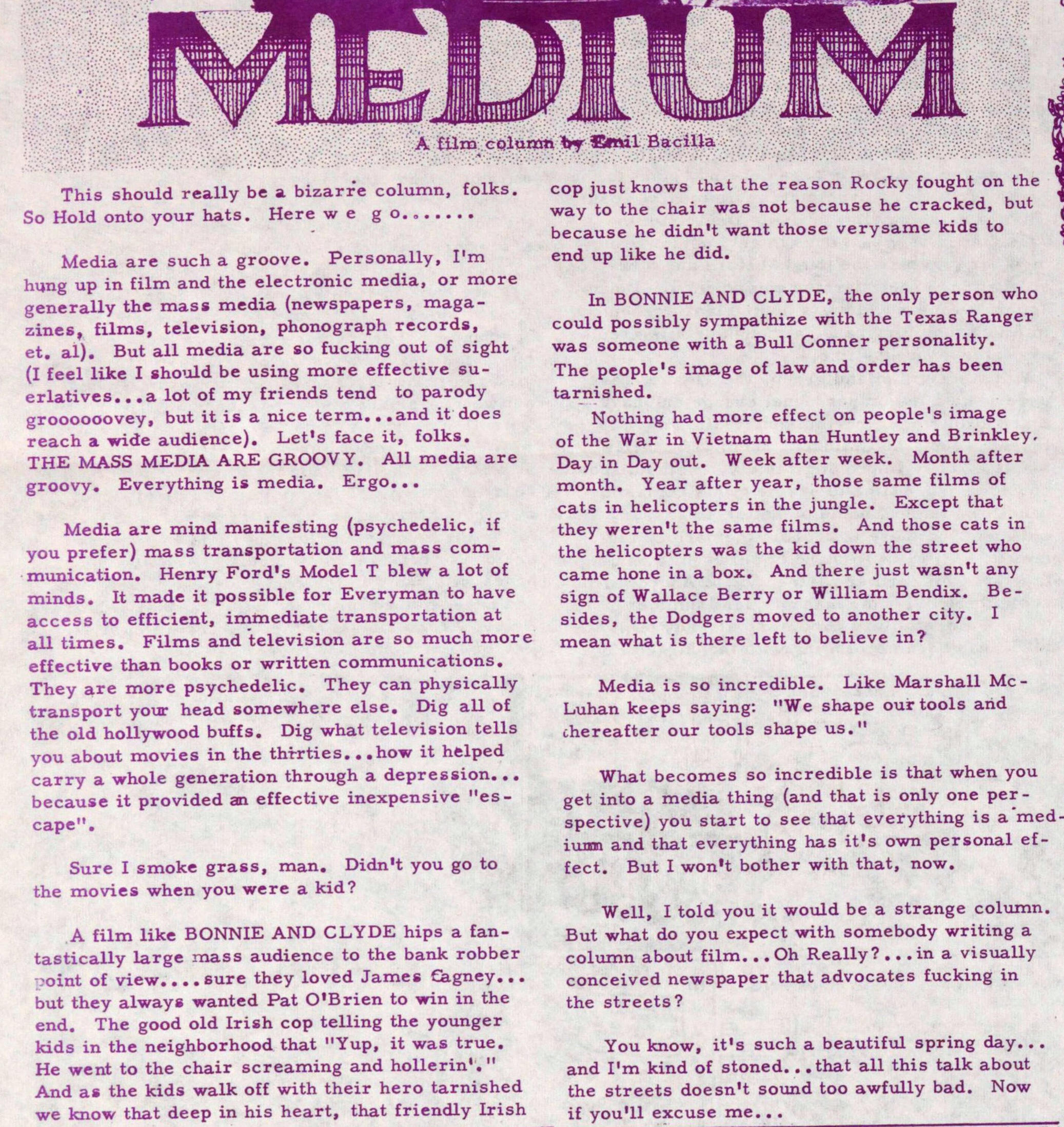 This should really be a bizarre column, folks. So Hold onto your hats. Here we go.. Media are such a groove. Personally, I'm hung up in film and the electronic media, or more generally the mass media (newspapers, magazines, films, televisión, phonograph records, et. al). But all media are so fucking out of sight (I feel like I should be using more effective suerlatives...a lot of my friends tend to parody groooooovey, but it is a nice term. . .and it does reach a wide audience). Let's face it, folks. THE MASS MEDIA ARE GROOVY. All media are groovy. Everything is media. Ergo. . . Media are mind manifesting (psychedelic, if you prefer) mass transportation and mass communication. Henry Ford's Model T blew a lot of minds. It made it possible for Everyman to have access to efficiënt, immediate transportation at all times. Films and televisión are so much more effective than books or written Communications. They are more psychedelic. They can physically transport your head somewhere else. Dig all of the oíd hollywood buffs. Dig what televisión tells you about movies in the thrrties. ..how it helped carry a whole generation through a depression. .. because it provided an effective inexpensive "escape". Sure I smoke grass, man. Didn't you go to the movies when you were a kid? A film like BONNIE AND CLYDE hips a fantastically large mass audience to the bank robber ?oint of view. . . . sure they loved James Eagney. . . but they always wanted Pat O'Brien to win in the end. The good old Irish cop telling the younger kids in the neighborhood that "Yup, it was true. He went to the chair screaming and hollerin1." And as the kids walk off with their hero tarnished we know that deep in his heart, that friendly Irish cop justknows that the reason Rocky fought on the way to the chair was not because he cracked, but because he didn't want those verysame kids to end up like he did. In BONNIE AND CLYDE, the only per son who could possibly sympathize with the Texas Ranger was someone with a Buil Conner personality. The people's image oL law and order has been tarnished. tarnisnea. Nothing had more effect on people's image of the War in Vietnam than Huntley and Brinkley. Day in Day out. Week after week. Month after month. Year after year, those same films of cats in helicopters in the jungle. Except that they weren't the same films. And those cats in the helicopters was the kid down the street who came hone in a box. And there just wasn't any sign of Wallace Berry or William Bendix. Besides, the Dodgers moved to another city. I mean what is there left to believe in? Media is so incredible. Like Marshall McLuhan keeps saying: "We shape our tools and chereafter our tools shape us." What becomes so incredible is that when you get into a media thing (and that is only one perspective) you start to see that everything is a medium and that everything has it's own personal effect. But I won't bother with that, now. Well, I told you it would be a strange column. But what do you expect with somebody writing a column about film. . . Oh Really ? ... in a visually conceived newspaper that advocates fucking in the streets? You know, it's such a beautiful spring day. . . and I'm kind of stoned. . .that all this talk about the streets doesn't sound too awfully bad. Now if you'll excuse me. . .