The Craft Is Ebbing Liga Williams 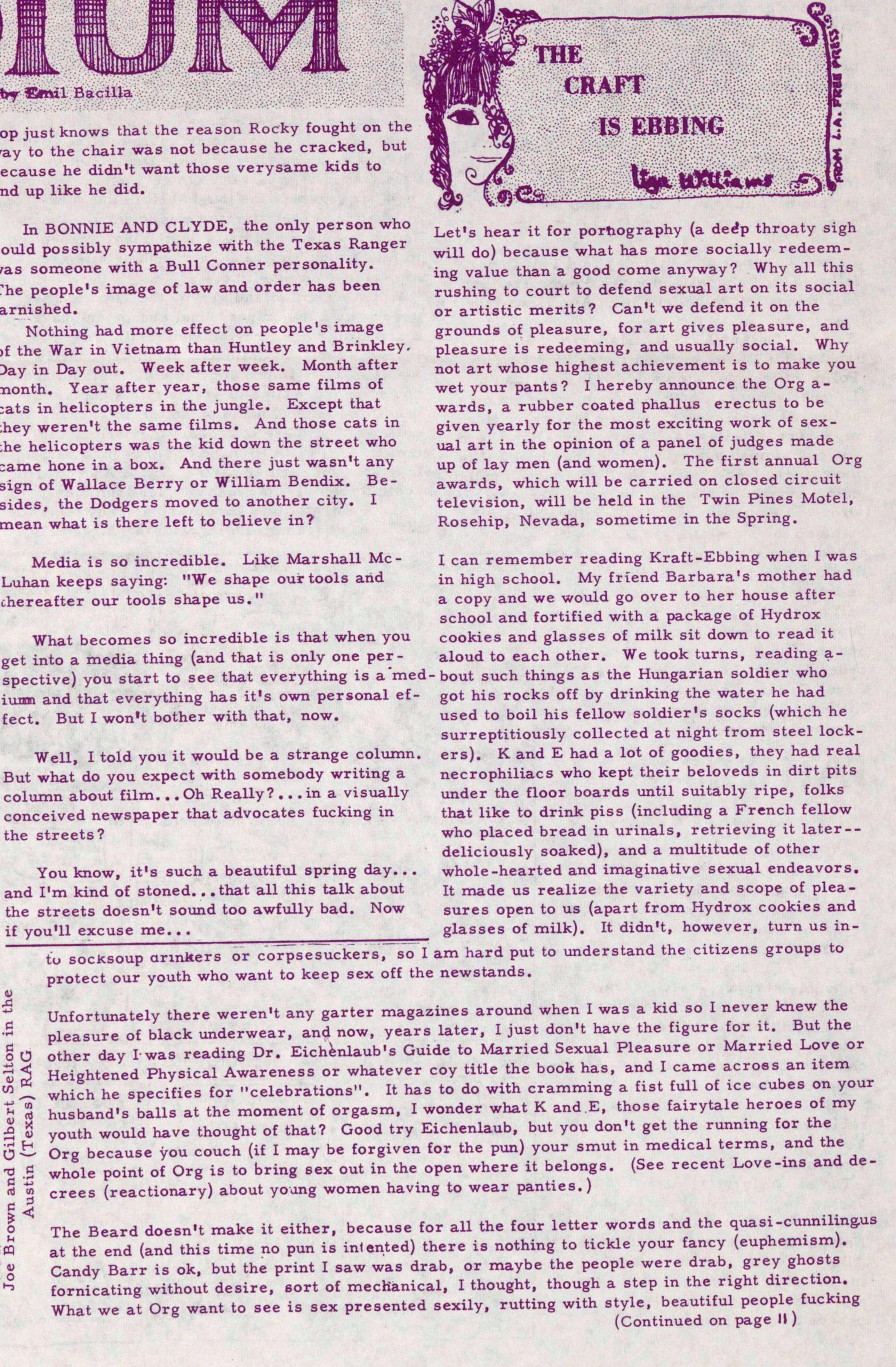 Let's hear it for portiography (a dep throaty sigh will do) because what has more socially redeeming valué than a good come anyway? Why all this rushing to court to defend sexual art on its social or artistic merits? Can't we defend it on the grounds of pleasure, for art gives pleasure, and pleasure is redeeming, and usually social. Why not art whose highest achievement is to make you wet your pants? I hereby announce the Org awards, a rubber coated phallus erectus to be given yearly for the most exciting work of sexual art in the opinión of a panel of judges made up of lay men (and women). The first annual Org awards, which will be carried on closed circuit televisión, will be held in the Twin Pines Motel, Rosehip, Nevada, sometime in the Spring. I can remember reading Kraft-Ebbing when I was in high school. My friend Barbara's mother had a copy and we would go over to her house after school and fortified with a package of Hydrox cookies and glasses of milk sit down to read it aloud to each other. We took turns, reading about such things as the Hungarian soldier who got his rocks off by drinking the water he had used to boil his fellow soldier 's socks (which he surreptitiously collected at night from steel lockers). K and E had a lot of goodies, they had real necrophiliacs who kept their beloveds in dirt pits under the floor boards until suitably ripe, folks that like to drink piss (including a French fellow who placed bread in urinals, retrieving it later-deliciously soaked), and a multitude of other whole-hearted and imaginative sexual endeavors. It made us realize the variety and scope of pleasures open to us (apart from Hydrox cookies and glasses of milk). It didn't, however, turn us to socKsoup drinkers or corpsesuckers, sol am hard put to understand the citizens groups to protect our youth who want to keep sex off the newstands. Unfortunately there weren't any garter magazines around when I was a kid so I never knew the pleasure of black underwear, and now, years later, I just don't have the figure for it. But the other day I was reading Dr. Eichenlaub's Guide to Married Sexual Pleasure or Married Love or Heightened Physical Awareness or whatever coy title the book has, and I carne acroes an item which he specifies for "celebrations". It has to do with cramming a fist full of ice cubes on your husband's balls at the moment of orgasm, I wonder what K and. E, those fairytale héroes of my youth would have thought of that? Good try Eichenlaub, but you don't get the running for the Org because you couch (if I may be forgiven for the pun) your smut in medical terms, and the whole point of Org is to bring sex out in the open where it belongs. (See recent Love-ins and decrees (reactionary) about yoang women having to wear panties.) The Beard doesn't make it either, because for all the four letter words and the quasi -cunniling.us at the end (and this time no pun is intented) there is nothing to tickle your fancy (euphemism). Candy Barr is ok, but the print I saw was drab, or maybe the people were drab, grey ghosts fornicating without desire, eort of mechanical, I thought, though a step in the right direction. What we at Org want to see is sex presented sexily, rutting with style, beautiful people fucking (Continued on page II )