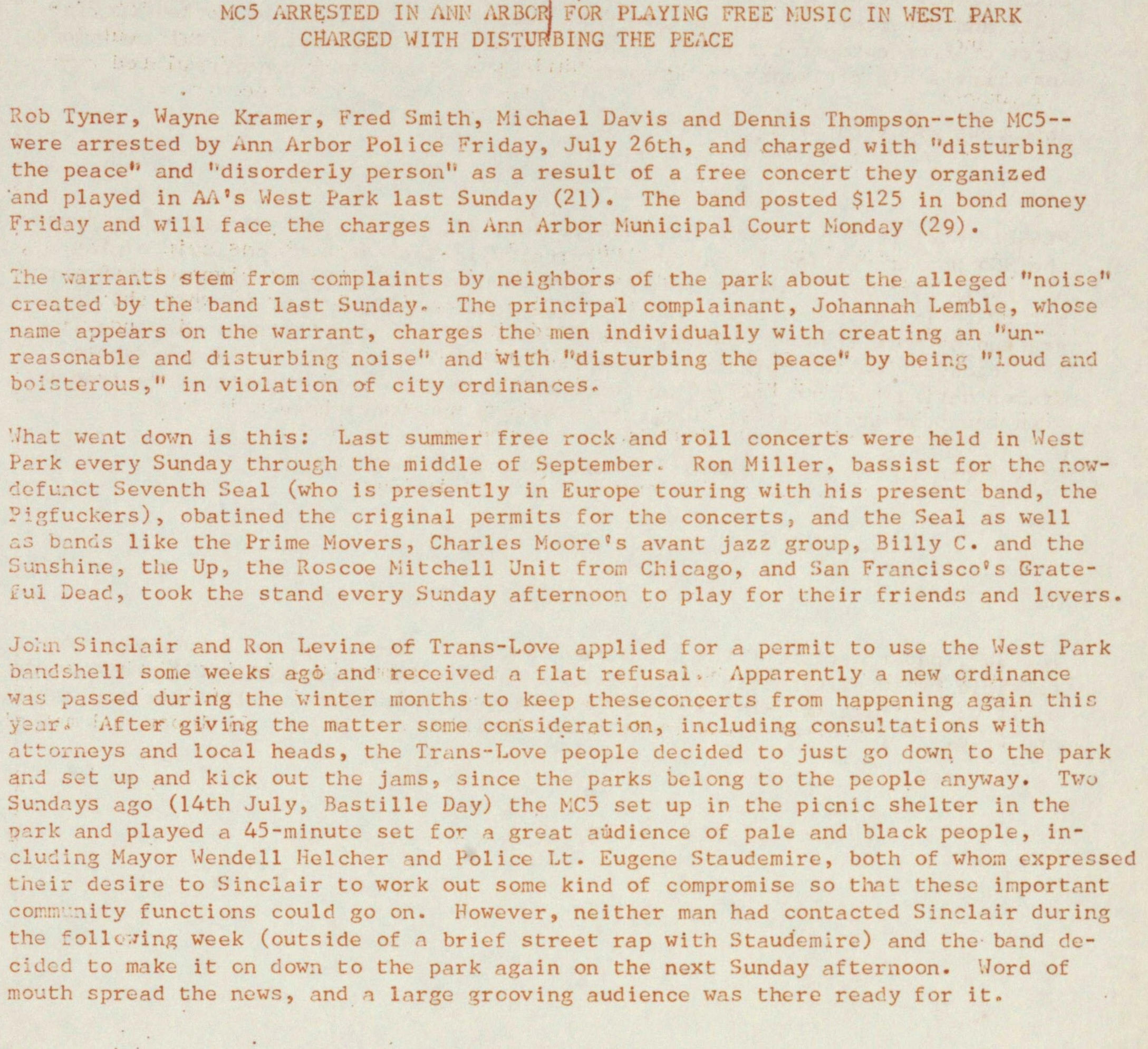 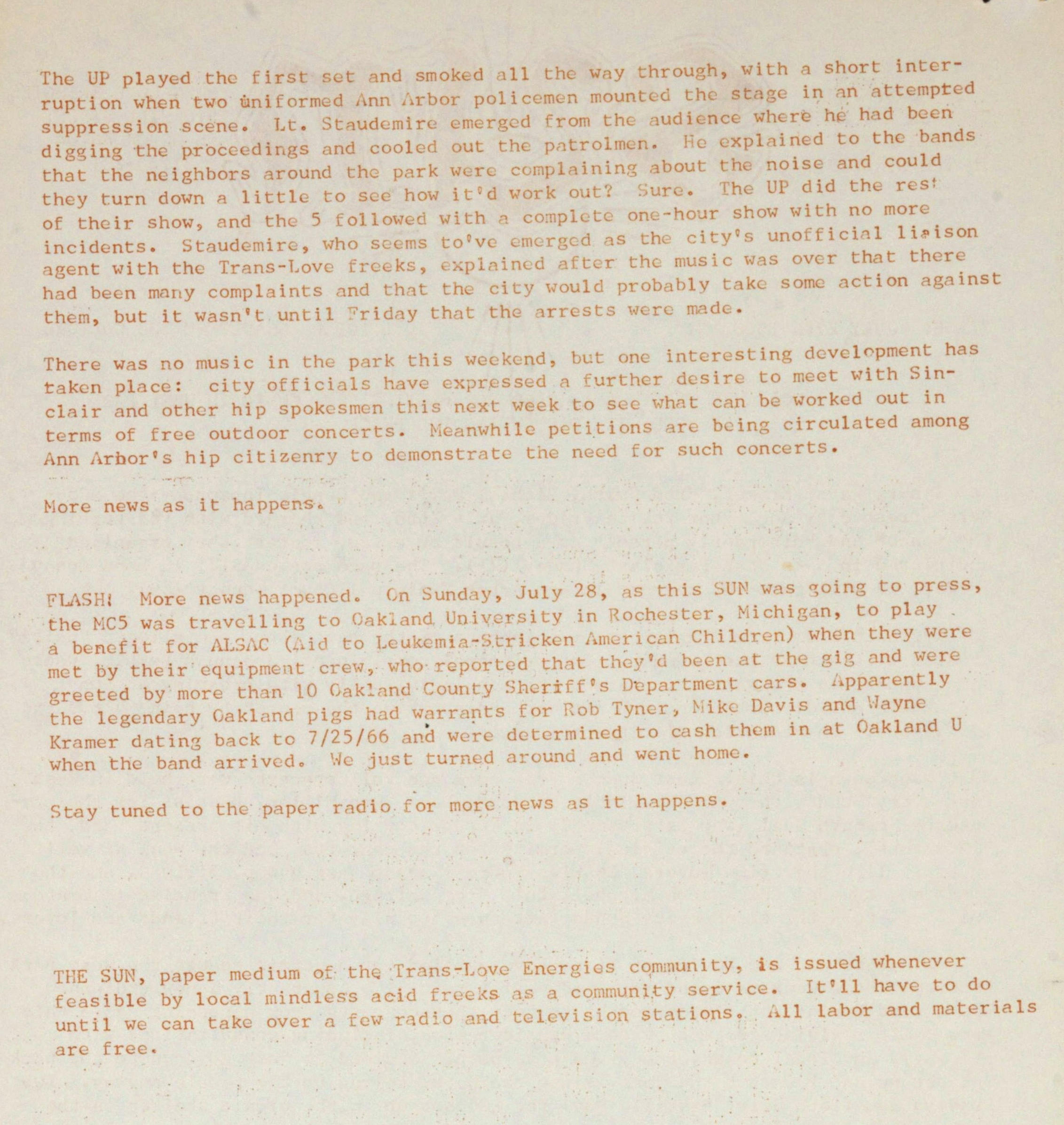 The warrants stem from complaints by neighbors of the park about the alleged "noise" created by the band last The principal complainant , Johannah Lemble, whose name appears on the warrant, charges the men individually with creating an "unreasonable and disturbing noise" and with "disturbing the peace" by being "loud a boisterous," in violation of city ordinances.

What went down is this: Last summer free rock and roll concerts were held in West Park every Sunday through the middle of September. Ron Miller, bassist for the now-defunct Seventh seal (who is presently in Europe touring with his present band, the Pigfuckers), obatined the original permits for the concerts, and the Seal as well bands like the Prime Movers, Charles Moore's avant jazz group, Billy C. and the sunshine, the Up, the Roscoe Mitchell Unit from Chicago, and San Francisco's Grateful Dead, took the stand every Sunday afternoon to play for their friends and levers.

John Sinclair and Ron Levine of Trans-Love applied for a permit to use the West Park bandshell some weeks ago and received a flat refusal. Apparently a new ordinance passed during the winter months to keep these concerts from happening again this After giving the matter some consideration, including consultations with attorneys and local heads, the Trains-Love people decided to just go down to the park and set up and kick out the jams, since the parks belong to the people anyway. Two Sundays ago (14th July, Bastille Day) the MC5 set up in the picnic shelter in the park and played a 45-minute set for a great audience of pale and black people, including Mayor Wendell Helcher and Police Lt. Eugene Staudemire, both of who expressed their desire to Sinclair to work out some kind of compromise so Chat these important community functions could go on. However, neither man had contacted Sinclair during the following week (outside of a brief street rap with Staudemire) and the band decided to make it on down to the park again on the next Sunday afternoon. Word of mouth spread the news, and a large grooving audience was there ready for it.

The UP played the first set and smoked all the way through, with a short interruption when two uniformed Ann Arbor policemen mounted the stage in an attempted suppression scene. Lt. Staudemire emerged from the audience where he had been digging the proceedlngs and cooled out the patrolmen. He explained to the bands that the neighbors around the park were complaining about the noise and could they turn down a little to see how it'd work out e. Ou UP did the res. of their show, and the 5 followed with a complete one-hour show with no more incidents. Staudemire, who seems to'v d as the city's unofficial li-ison agent with the Trans-Love freeks, explained after the music was over that there had been many complaints and that the city would probably take some action against them, but it wasn't until Friday that the arrests were made.

There was no music in the park this weekend, but one Interesting development has taken place: city officials have expressed a further desire to meet with Sinclair and other hip spokesmen this next week to sec what can be worked out in terms of free outdoor concerts. Meanwhile petitions are being circulated among Ann Arbor's hip citizenry to demonstrate the need tor such concerts.

More news as it happens.

FLASH: More news happened. On Sunday, July 28, as this SUN was going to press, the MC5 was travelling to Oakland. University in Rochester, Michigan, to play a benefit for ALSAC (Aid to Leukemia-Stricken American Children) when they were met by their equipment reported that they'd been at the gig and were greeted by more than 10 Oakland County Sheriff 's Department cars. Apparently the legendary Oakland pigs had warrants for Rob Tyner, Nike Davis and Wayne Kramer dating back to 7/25/66 and were determined to cash them in at Oakland U when the band arrived. We just turned around and went home.

Stay tuned to the paper radio for more news as it happens.

THE SUN, paper medium of the Trans -Love Energies community, is issued whenever feasible by local mindless acid freeks as a community service. It'll have to do until we can take over a few radio and television stations. All labor and materials are free.