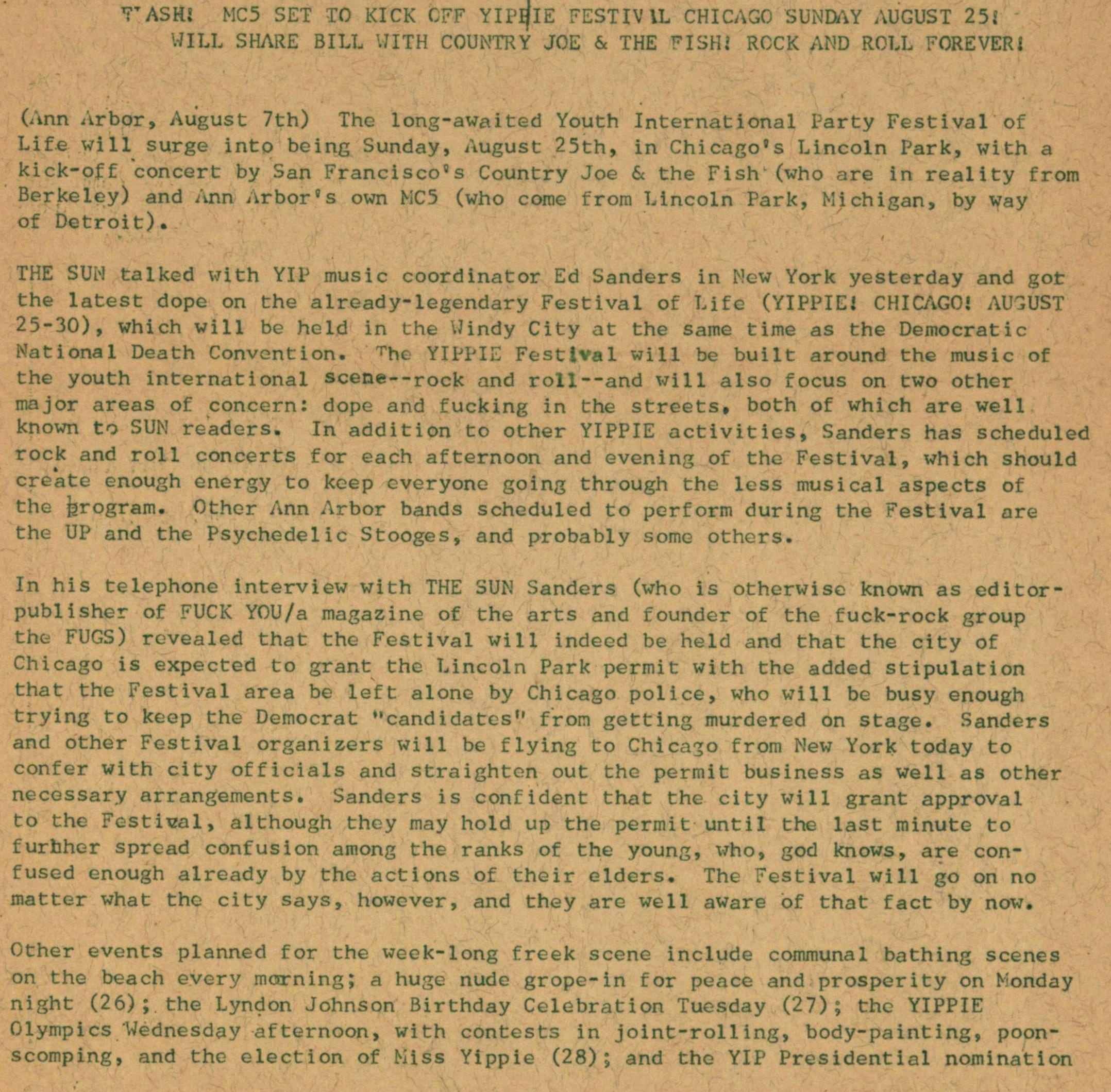 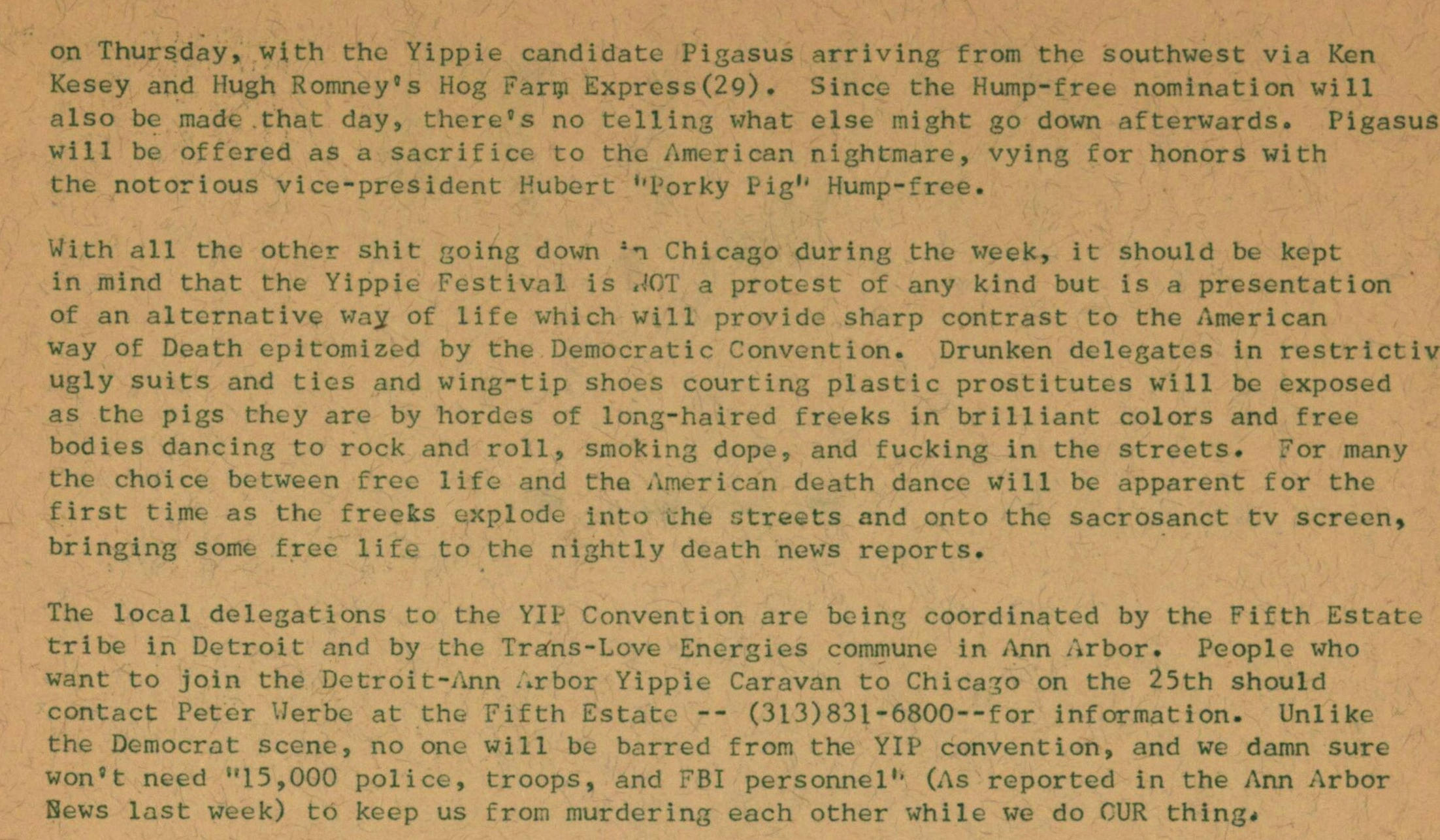 WILL SHARE BILL WITH COUNTRY JOE & THE FISH!  ROCK AND ROLL FOREVER!

(Ann Arbor, August 7th) The long-awaited Youth International Party Festival of Life will surge into being Sunday, August 25th, in Chicago's Lincoln Park, with a kick-off concert by San Francisco's Country Joe & the Fish (who are in reality from Berkeley) and Ann Arbor's own MC5 (who come from Lincoln Park, Michigan, by way of Detroit).

THE SUN talked with YIP music coordinator Ed Sanders in New York yesterday and got the latest dope on the already-legendary Festival of Life (YIPPIE! CHICAGO! AUGUST 25-30), which will be held in the Windy City at the same time as the Democratic National Death Convention. The YIPPIE Festival will be built around the music of the youth international scene--rock and roll--and will also focus on two other major areas of concern: dope and fucking in the streets, both of which are well known to SUN readers. In addition to other YIPPIE activities, Sanders has scheduled rock and roll concerts for each afternoon and evening of the Festival, which should create enough energy to keep everyone going through the less musical aspects of the program. Other Ann Arbor bands scheduled to perform during the Festival are the UP and the Psychedelic Stooges, and probably some others.

In his telephone interview with THE SUN Sanders (who is otherwise known as editor-publisher of FUCK YOU/a magazine of the arts and founder of the fuck-rock group the FUGS) revealed that the Festival will indeed be held and that the city of Chicago is expected to grant the Lincoln Park permit with the added stipulation that the Festival area be left alone by Chicago police, who will be busy enough trying to keep the Democrat "candidates" from getting murdered on stage. Sanders and other Festival organizers will be flying to Chicago from New York today to confer with city officials and straighten out the permit business as well as other necessary arrangements. Sanders is confident that the city will grant approval to the Festival, although they may hold up the permit until the last minute to further spread confusion among the ranks of the young, who, god knows, are confused enough already by the actions of their elders. The Festival will go on no matter what the city says, however, and they are well aware of that fact by now.

Other events planned for the week-long freek scene include communal bathing scenes on the beach every morning; a huge nude grope-in for peace and prosperity on Monday night (26); the Lyndon Johnson Birthday Celebration Tuesday (27); the YIPPIE Olympics Wednesday afternoon, with contests in joint-rolling, body-painting, poon-scomping, and the election of Miss Yippie (28); and the YIP Presidential nomination on Thursday, with the Yippie candidate Pigasus arriving from the southwest via Ken Kesey and Hugh Romney's Hog Farm Express(29). Since the Hump-free nomination will also be made that day, there's no telling what else might go down afterwards. Pigasus will be offered as a sacrifice to the American nightmare, vying for honors with the notorious vice-president Hubert "Porky Pig" Hump-free.

With all the other shit going down in Chicago during the week, it should be kept in mind that the Yippie Festival is NOT a protest of any kind but is a presentation of an alternative way of life which will provide sharp contrast to the American way of Death epitomized by the Democratic Convention. Drunken delegates in restrictive, ugly suits and ties and wing-tip shoes courting plastic prostitutes will be exposed as the pigs they are by hordes of long-haired freeks in brilliant colors and free bodies dancing to rock and roll, smoking dope, and fucking in the streets. For many the choice between free life and the American death dance will be apparent for the first time as the freeks explode into the streets and onto the sacrosanct t.v. screen, bringing some free life to the nightly death news reports.

The local delegations to the YIP Convention are being coordinated by the Fifth Estate tribe in Detroit and by the Trans-Love Energies commune in Ann Arbor. People who want to join the Detroit-Ann Arbor Yippie Caravan to Chicago on the 25th should contact Peter Uerbe at the Fifth Estate -- (313)831-6800--for information. Unlike the Democrat scene, no one will be barred from the YIP convention, and we damn sure won't need "15,000 police, troops, and FBI personnel" (As reported in the Ann Arbor News last week) to keep us from murdering each other while we do OUR thing.