Get Down With It 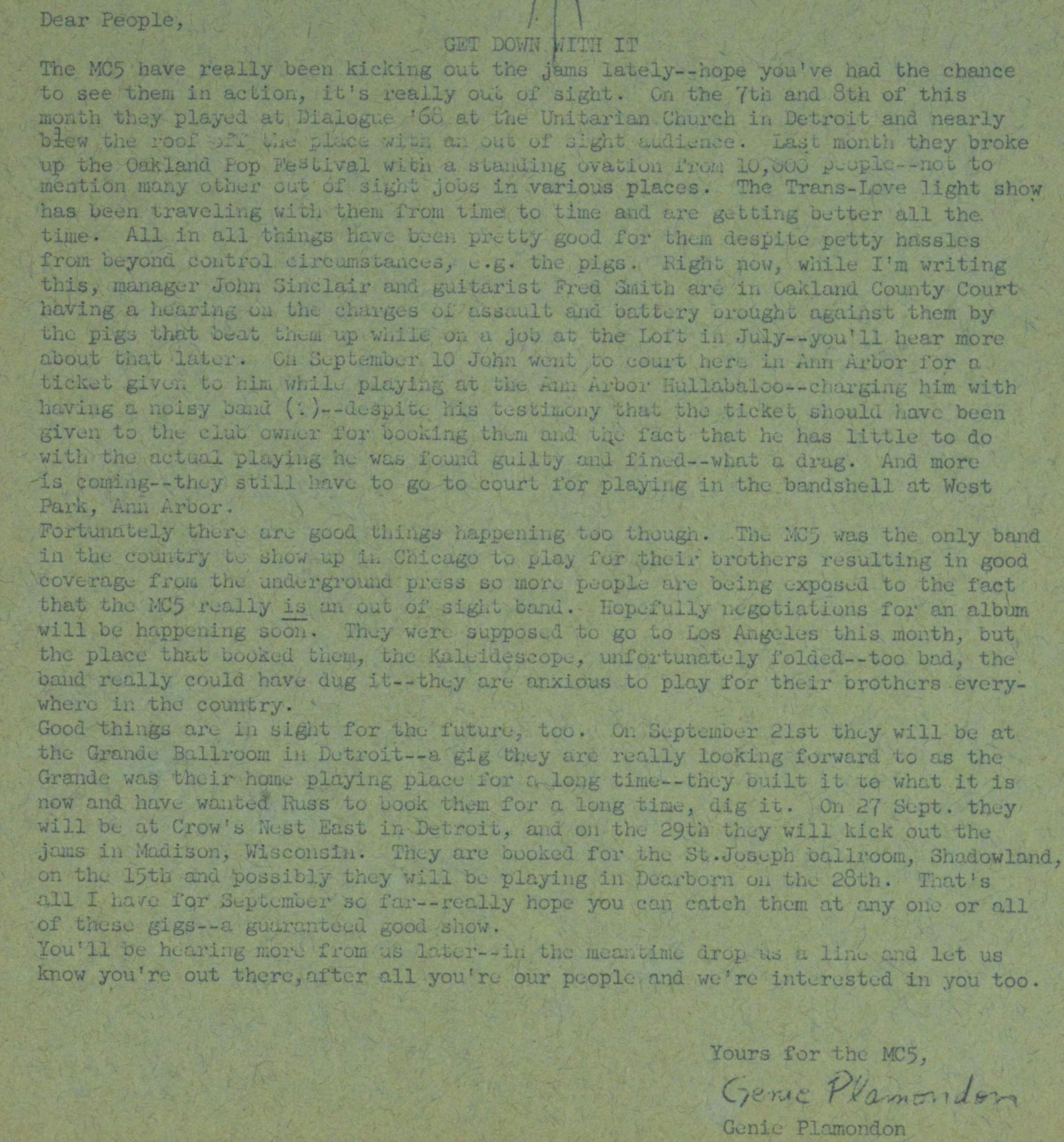 GET DOWN WITH IT

The MC5 have really been kicking out the jams lately--hope you've had the chance to see them in action it's really out of sight.  On the 7th and 8th of this month they played at Dialogue '68 at the Unitarian Church in Detroit and nearly blew the roof off the place with an out of sight audience.  Last month they broke up the Oakland Pop Festival with a standing ovation from 10,000 people--not to mention many other out of sight jobs in various places.  The Trans-Love light show has been traveling with them from time to time and are getting better all the time.  All in all things have been pretty good for them despite petty hassles from beyond control circumstances, e.g. the pigs.  Right now, while I'm writing this, manager John Sinclair and guitarist Fred Smith are in Oakland County Court having a hearing on the charges of assault and battery brought against them by the pigs that beat them up while on a job at the Loft in July--you'll hear more about that later.  On September 10 John went to court here in Ann Arbor for a ticket given to him while playing at the Ann Arbor Hulabaloo--charging him with having a noisy band (!)--despite his testimony that the ticket should have been given to the club owner for booking them and the fact that he has little to do with the actual playing he was found guilty and fined--what a drag.  And more is coming--they still have to go to court for playing in the band shell at West Park, Ann Arbor.

Fortunately there are good things happening too though.  The MC5 was the only band in the country to show up in Chicago to play for their brothers resulting in good coverage from the underground press so more people are being exposed to the fact that the MC5 really is an out of sight band.  Hopefully negotiations for an album will be happening soon.  They were supposed to go to Los Angeles this month, but the place that booked them, the Kaleidescope, unfortunately folded--too bad, the band really could have dug it--they are anxious to play for their brothers everywhere in the country.

Good things are in sight for the future, too.  On September 21st they will be at the Grande Ballroom in Detroit-a gig they are really looking forward to as the Grande was their home playing place for a long time--they built it to what it is now and have wanted Russ to book them for a long time, dig it.  On 27 Sept. they will be at Crow's Nest East in Detroit, and on the 29th they will kick out the jams in Madison Wisconsin.  They are booked for the St. Joseph ballroom, Shadowland, on the 15th and possibly they will be playing in Dearborn on the 28th.  That's all I have for September so far--really hope you can catch them at any one or all of these gigs--a guaranteed good show.

You'll be hearing more from us later--in the meantime drop us a line and let us know you're out there after all you're our people and we're interested in you too.

Yours for the MC5,