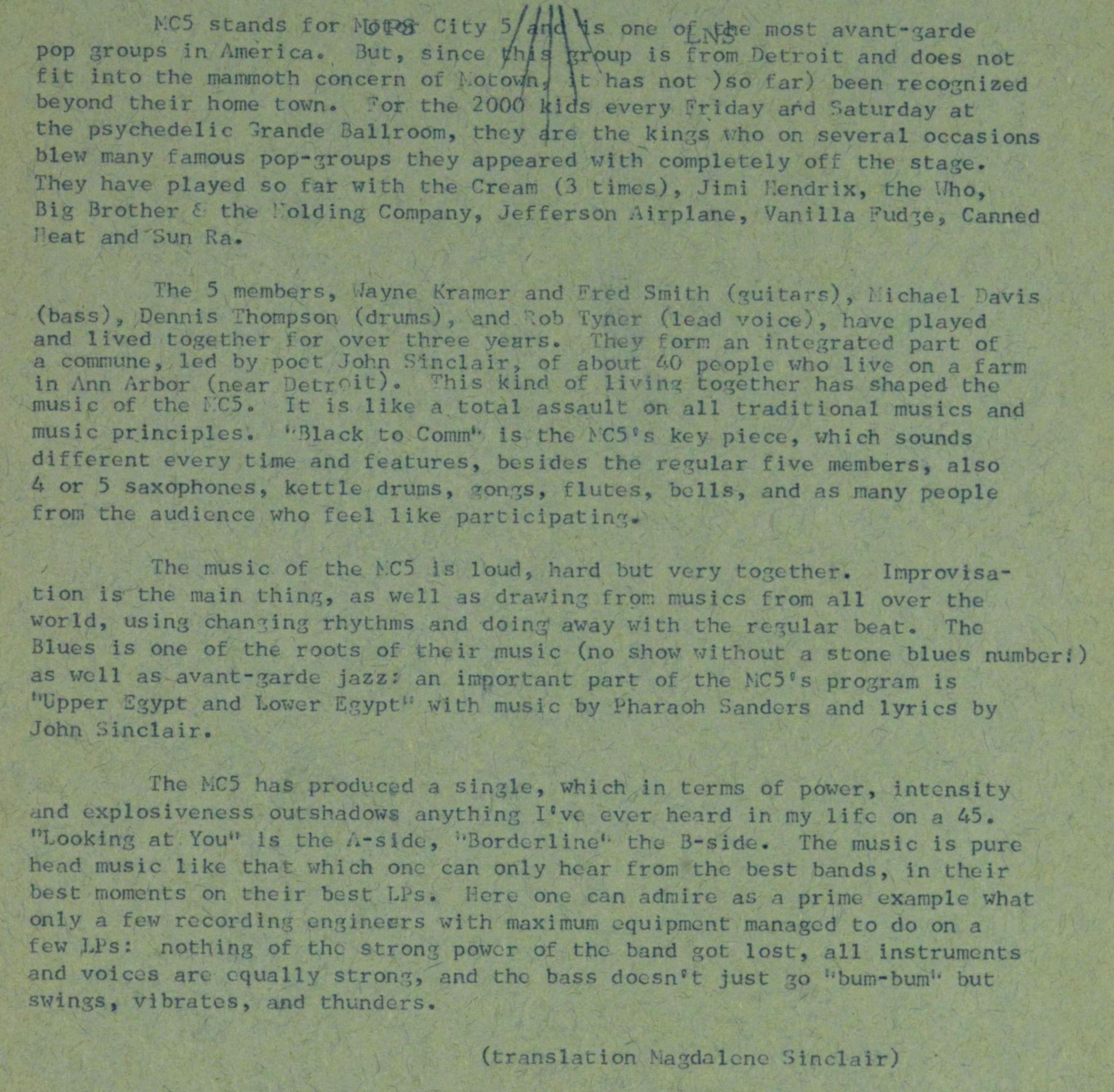 MC5 stands for Motor City 5 and is one the most avant-garde pop groups in America. But, since this group is from Detroit and does not fit into the mammoth concern of Motown, it has not (so far) been recognized beyond their home town. For the 2000 kids every Friday and Saturday at the psychedelic Grande Ballroom, they are the kings who on several occasions blew many famous pop-groups they appeared with completely off the stage. They have played so far with the Cream (3 times), Jimi Hendrix, the Who, Big Brother & the Holding Company, Jefferson Airplane, Vanilla Fudge, Canned Heat and Sun Ra.

The 5 members, Wayne Kramer and Fred Smith (guitars), Michael Davis (bass), Dennis Thompson (drums), and Rob Tyner (lead voice), have played and lived together for over three years. They form an integrated part of a commune, led by poet John Sinclair, of about 40 people who live on a farm in Ann Arbor (near Detroit). This kind of living together has shaped the music of the MC5. It is like a total assault on all traditional musics and music principles. "Black to Comm" is the MC5's key piece, which sounds different every time and features, besides the regular five members, also 4 or 5 saxophones, kettle drums, gongs, flutes, bells, and as many people from the audience who feel like participating.

The music of the MC5 is loud, hard but very together. Improvisation is the main thing, as well as drawing from musics from all over the world, using changing rhythms and doing away with the regular beat. The Blues is one of the roots of their music (no show without a stone blues number!) as well as avant-garde jazz: an important part of the MC5's program is "Upper Egypt and Lower Egypt" with music by Pharaoh Sandors and lyrics by John Sinclair.

The MC5 has produced a single, which in terms of power, intensity and explosiveness outshadows anything I've ever heard in my life on a 45. "Looking at You" is the A-side, "Borderline" the B-side. The music is pure head music like that which one can only hear from the best bands, in their best moments in their best LPs. Here one can admire as a prime example what only a few recording engineers with maximum equipment managed to do on a few LPs: nothing of the strong power of the band got lost, all instruments and voices are equally strong, and the bass doesn't just go "bum-bum" but swings, vibrates, and thunders.