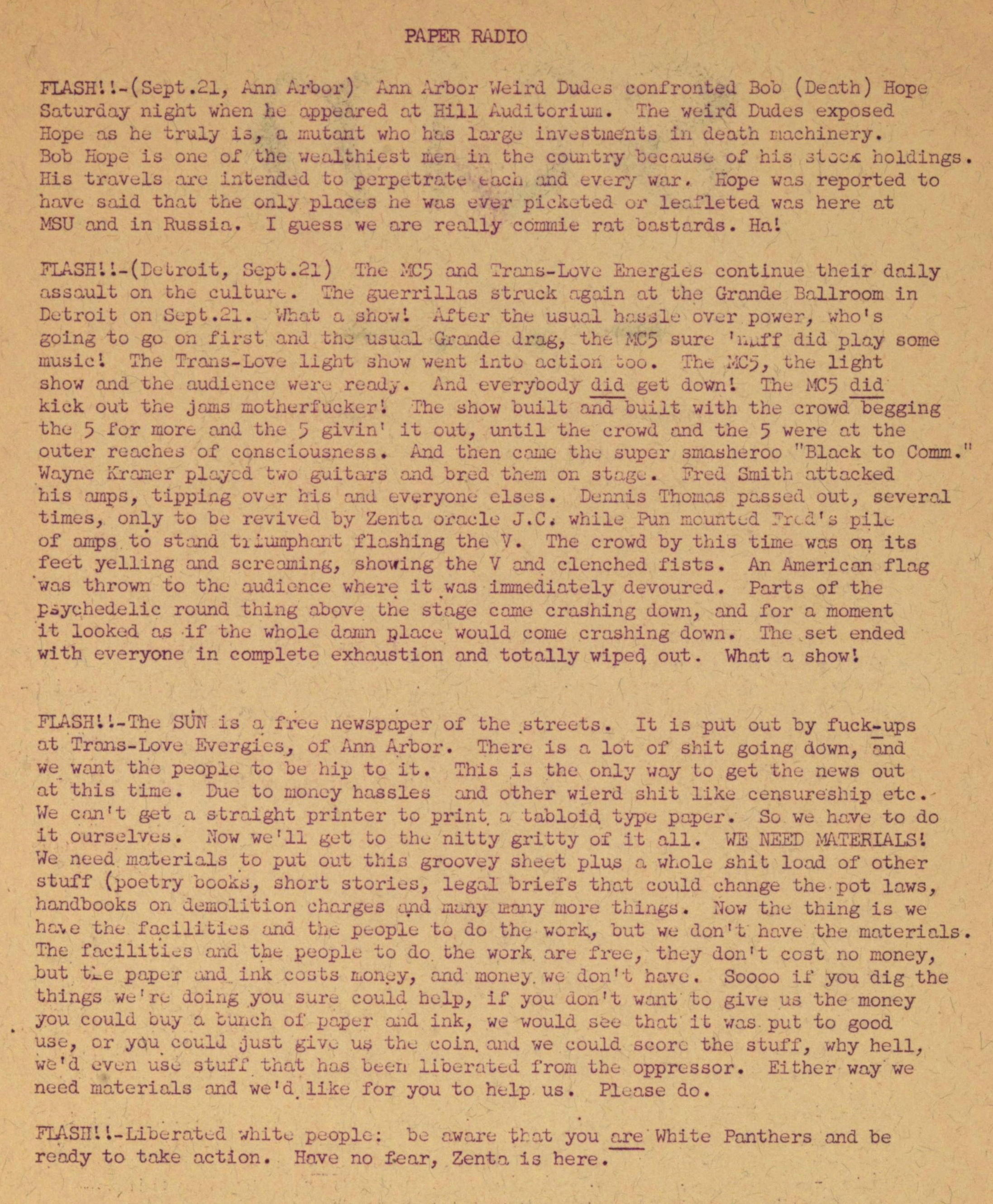 FLASH!!-(Sept. 21, Ann Arbor) Ann Arbor Weird Dudes confronted Bob (Death) Hope Saturday night, when he appeared at Hill Auditorium. The Weird Dudes exposed Hope as he truly is, a mutant who has large investments in death machinery. Bob Hope is one of the wealthiest men in the country because of his stock holdings. His travels are intended to perpetrate each and every way. Hope was reported to have said that the only places he was ever picketed or leafleted was here at MSU and in Russia. I guess we are really commie rat bastards. Ha!

FLASH!!-(Detroit, Sept. 21) The MC5 and Trans-Love Energies continue their daily assault on the culture. The guerrillas struck again at the Grande Ballroom in Detroit on Sept. 21. What a show! After the usual hassle over power, who's going to go on first and the usual Grande drag, the MC5 sure 'nuff did play some music! The Trans-Love light show went into action too. The MC5, the light show and the audience were ready. And everybody did get down! The MC5 did kick out the jams motherfucker! The show built and built with the crowd begging the 5 for more and the 5 givin' it out, until the crowd and the 5 were at the outer reaches of consciousness. And then came the super smasheroo "Black to Comm." Wayne Kramer played two guitars and bred them on stage. Fred Smith attacked his amps, tipping over his and everyone elses. Dennis Thomas passed out, several times, only to be revived by Zenta oracle J.C. while Pun mounted Fred's pule of amps to stand triumphant flashing the V. The crowd by this time was on its feet yelling and screaming, showing the V and clenched fists. An American flag was thrown to the audience where it was immediately devoured. Parts of the psychedelic round thing above the stage came crashing down, and for a moment it looked as if the whole damn place would come crashing down. The set ended with everyone in complete exhaustion and totally wiped out. What a show!

FLASH!!--The SUN is a free newspaper of the streets. It is put out by fuck-ups at Trans-Love Energies, of Ann Arbor. There is a lot of shit going down, and we want the people to be hip to it. This is the only way to get the news out at this time. Due to money hassles and other weird shit like censorship etc. We can't get a straight printer to print a tabloid type paper. So we have to do it ourselves. Now we'll get to the nitty gritty of it all. WE NEED MATERIALS! We need materials to put out this groovey sheet plus a whole shit load of other stuff (poetry books, short stories, legal briefs that could change the pot laws, handbooks on demolition charges and many more things). Now the thing is we have the facilities and the people to do the work are free, they don't cost no money, but the paper and ink costs money, and money we don't have. Soooo if you dig the things we're doing you sure could help, if you don't want to give us the money you could buy a bunch of paper and ink, we would see that it was put to good use, or you could just give us the coin and we could score the stuff, why hell, we'd even use stuff that has been liberated from the oppressor. Either way we need materials and we'd like for you to help us. Please do.

FLASH!!-Liberated white people: be aware that you are White Panthers and be ready to take action. Have no fear, Zenta is here.