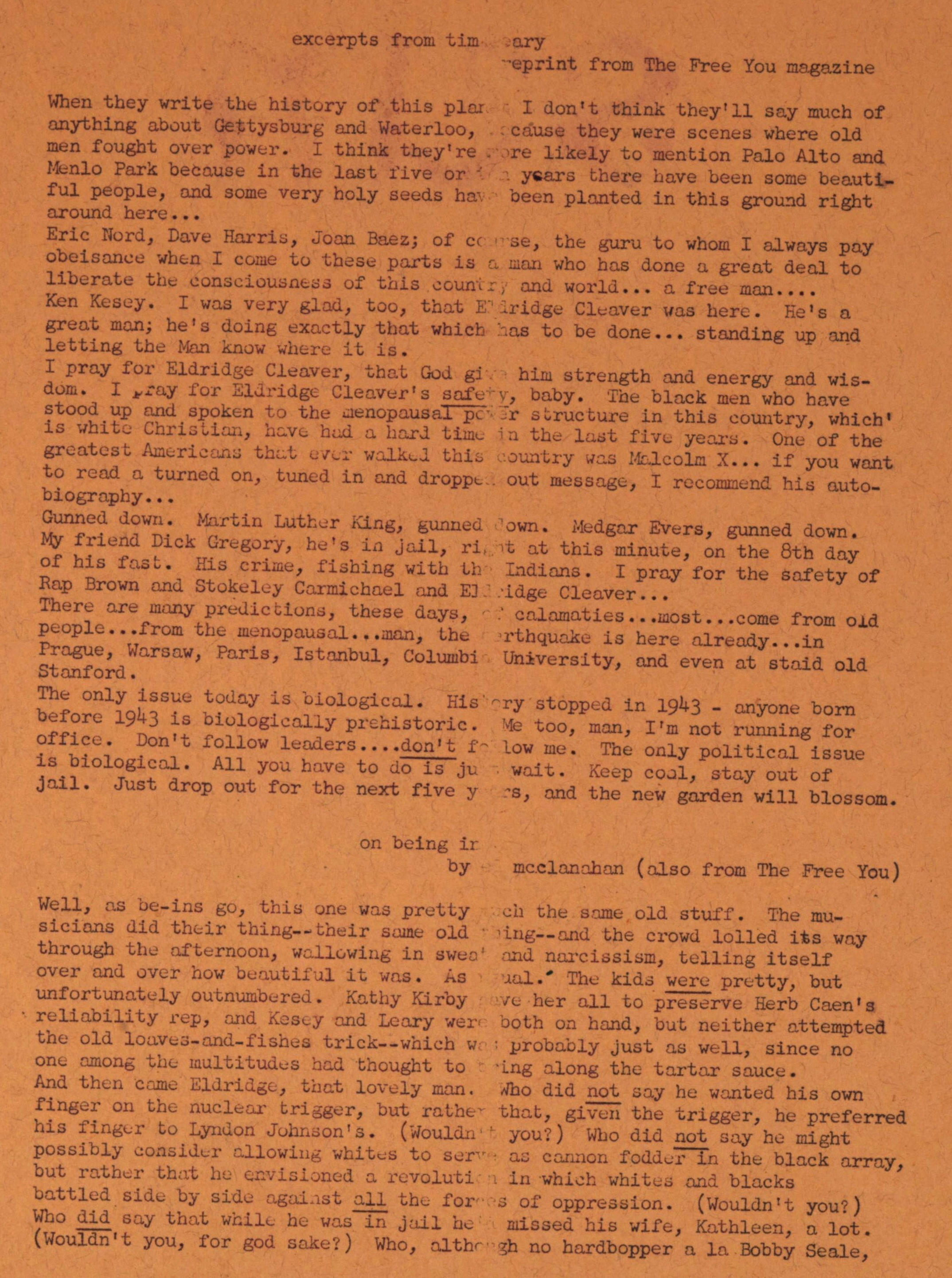 From Alaska come reports that the natives are restless. They are talking about ancient aboriginal rights, and the more they talk the more hacked off they get. The militants among them insist that the Indians and Eskimos must demand ownership of the entire state. Lets help 'em!

reprint from The Free You magazine

When they write the history of this planet, I don't think they'll say much of anything about Gettysburg and Waterloo, because they were scenes where old men fought over power. I think they're more likely to mention Palo Alto and Menlo Park because in the last five or so years there have been some beautiful people, and some very holy seeds have been planted in this ground right here...

Eric Nord, Dave Harris, Joan Baez; of course, the guru to whom I always pay obeisance when I come to these parts is a man who has done a great deal to liberate the consciousness of this country and world...a free man...Ken Kesey. I was very glad, too, that Eldridge Cleaver was here. He's a great man; he's doing exactly that which has to be done...standing up and letting the Man know where it is.

I pray for Eldridge Cleaver, that God give him strength and energy and wisdom. I pray for Eldridge Cleaver's safety, baby. The black men who have stood up and spoken to the menopausal power structure in this country, which is white Christian, have had a hard time in the last five years. One of the greatest Americans that ever walked this country was Malcom X...if you want to read a turned on, tuned in and dropped out message, I recommend his autobiography...

Gunned down. Martin Luther King, gunned down. Medgar Evers, gunned down. My friend Dick Gregory, he's in jail, right at this minute, on the 8th day of his fast. His crime, fishing with the Indians. I pray for the safety of Rap Brown and Stokeley Carmichael and Eldridge Cleaver...

There are many predictions, these days, of calamaties...most...come from old people...from the menopausal...man, the earthquake is here already...in Prague, Warsaw, Paris, Istanbul, Columbia University, and even at staid old Stanford.

The only issue today is biological. History stopped in 1943 - anyone born before 1943 is a biologically prehistoric. Me too, man, I'm not running for office. Don't follow lenders...don't follow me. The only political issue is biological. All you have to do is just wait. Keep cool, stay out of jail. Just drop out for the next five years, and the new garden will blossom.

by --mcclanahan  (also from The Free You)

Well, as be-ins go, this one was pretty much the same old stuff. The musicians did their thing--their some old thing--and the crowd lolled its way through the afternoon, wallowing in sweat and narcissism, telling itself over and over how beautiful it was. As usual. The kids were pretty, but unfortunately outnumbered. Kathy Kirby gave her all to preserve Herb Caen's reliability rep, and Kesey and Leary were both on hand, but neither attempted the old loaves-and-fishes trick--which was probably just as well, since no one among the multitudes had thought to bring along the tartar sauce. And then came Eldridge, that lovely man. Who did not say he wanted his own finger on the nuclear trigger, but rather that, given the trigger, he preferred his finger to Lyndon Johnson's. (Wouldn't you?) Who did not say he might possibly consider allowing whites to serve as cannon fodder in the black array, but rather that he envisioned a revolution in which whites and blacks battled side by side against all the forces of oppression. (Wouldn't you?) Who did say that while he was in jail he missed his wife, Kathleen, a lot. (Wouldn't you, for god's sake?) Who, although no harbopper a la Bobby Seale.