being in cont. nonetbeless come on with ... 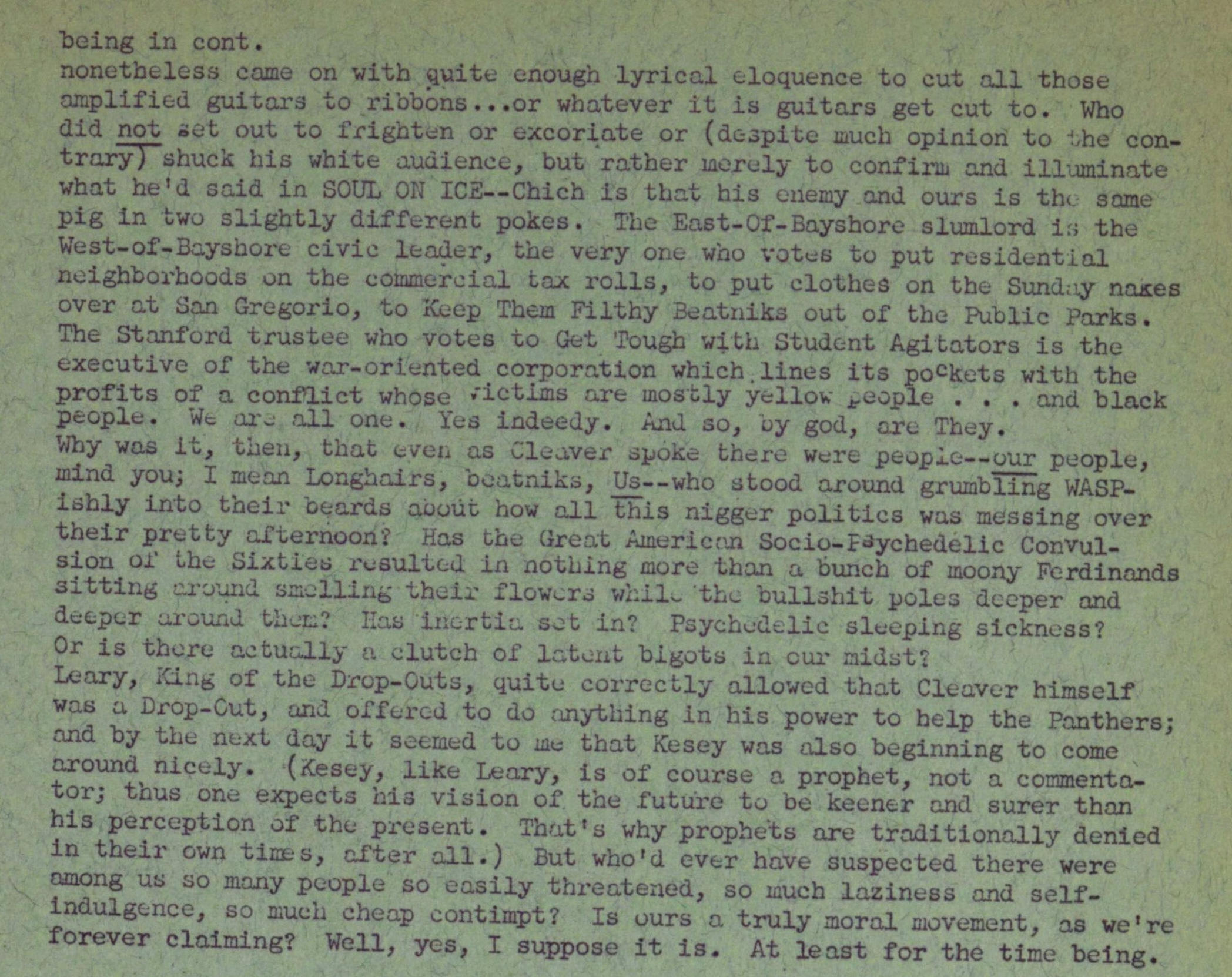 nonetheless came on with quite enough lyrical eloquence to cut all those amplified guitars to ribbons...or whatever it is guitars get cut to. Who did not set out to frighten or excoriate or (despite much opinion to the contrary) shuck his white audience, but rather merely to confirm and illuminate what he'd said in SOUL ON ICE--Chich is that his enemy and ours is the same pig in two slightly different pokes. The East-Of-Bayshore slumlord is the West-Of-Bayshore civic leader, the very one who votes to put residential neighborhoods on the commercial tax rolls, to put clothes on the Sunday nakes over at San Gregorio, to Keep Them Filthy Beatniks out of the Public Parks. The Stanford trustee who votes to Get Tough with Student Agitators is the executive of the war-oriented corporation which lines its pockets with the profits of a conflict whose victims are mostly yellow people...and black people. We are all one. Yes indeedy. And so, by god, are They. Why was is, then, that even as Cleaver spoke there were people--our people, mind you; I mean Longhairs, beatniks, Us--who stood around grumbling WASP-ishly into their beards about how all this nigger politics was messing over their pretty afternoon? Has the Great American Socio-Psychedelic Convulsion of the Sixties resulted in nothing more than a bunch of moony Ferdinands sitting around smelling their flowers while the bullshit piles deeper and deeper around them? Has inertia set in? Psychedelic sleeping sickness? Or is there actually a clutch of latent bigots in out midst? Leary, King of the Drop-Outs, quite correctly allowed that Cleaver himself was a Drop-Out, and offered to do anything in his power to help the Panthers; and by the next day it seemed to me that Kesey was also beginning to come around nicely. (Kesey, like Leary, is of course a prophet, not a commentator; thus one expects his vision of the future to be keener and surer than his perception of the present. That's why prophets are traditionally denied in their own times, after all.) But who'd ever have suspected there were among us so many people so easily threatened, so much laziness and self-indulgence, so much cheap contimpt? Is ours a truly moral movement, as we're forever claiming? Well, yes, I suppose it is. At least for the time being.