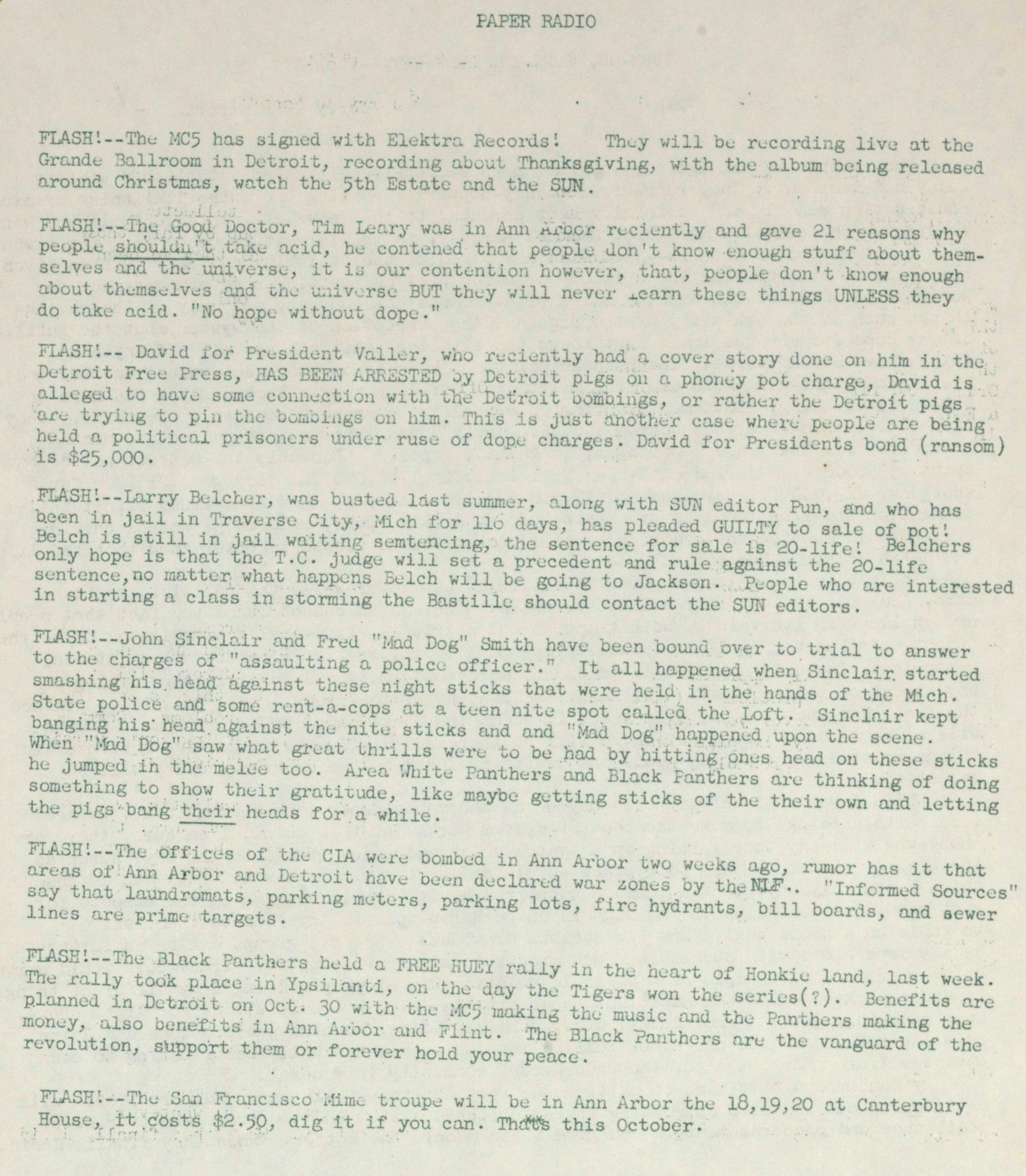 FLASH!--The MC5 has signed with Elektra Records! They will be recording live at the Grande Ballroom in Detroit, recording about Thanksgiving, with the album being released around Christmas, watch the 5th Estate and the SUN.

FLASH!--The Good Doctor, Tim Leary was in Ann Arbor recently and gave 21 reasons why people shouldn't take acid, be contented that people don't know enough stuff about themselves and the universe, it is our contention however, that, people don't know enough about themselves and the universe BUT they will never learn these things UNLESS they do take acid. "No hope without dope."

FLASH!--David for President Valler, who recently had a cover story done on him in the Detroit Free Press, HAS BEEN ARRESTED by Detroit pigs on a phoney pot charge, David  is alleged to have some connections with the Detroit bombings, or rather the Detroit pigs are trying to pin the bombings on him. This is just another case where people are being held as political prisoners under ruse of dope charges. David for Presidents bond (ransom) is $25,000.

FLASH!--Larry Belcher, was busted last summer, along with SUN editor Pun, and who has been in jail in Traverse City, Mich for 116 days, has pleaded GUILTY to sale of pot! Belch is still in jail waiting sentencing, the sentence for sale is 20-life! Belchers only hope is that the T.C. judge will set a precedent and rule against the 20-life sentence, no matter what happens Belch will be going to Jackson. People who are interested in starting a class in storming the Bastille should contact the SUN editors.

FLASH!--John Sinclair and Fred "Mad Dog" Smith have been bound over to trial to answer the charges of "assaulting a police officer." It all happened when Sinclair started smashing his head against those night sticks that were held in the hands of the Mich. State police and some rent-a-cops at a teen nite spot called the Loft. Sinclair kept banging his head against the nite sticks and and "Mad Dog" happened upon the scene. He jumped in the melee too. Area White Panthers and Black Panthers are thinking of doing something to show their gratitude, like maybe getting sticks of their own and letting the pigs band their heads for a while.

FLASH!--The offices of the CIA were bombed in Ann Arbor two weeks ago, rumor has it that areas of Ann Arbor and Detroit have been declared was zones by the NLF. "Informed Sources" say that laundromats, parking meters, parking lots, fire hydrants, bill boards, and sewer lines are prime targets.

FLASH!--The Black Panthers held a FREE HUEY rally in the heart of Honkie land, last week. The rally took place in Ypsilanti, on the day the Tigers won the series(?). Benefits are planned in Detroit on Oct. 30 with the MC5 making the music and the Panthers making the money, also benefits in Ann Arbor and Flint. The Black Panthers are the vanguard of the revolution, support them or forever hold your peace.