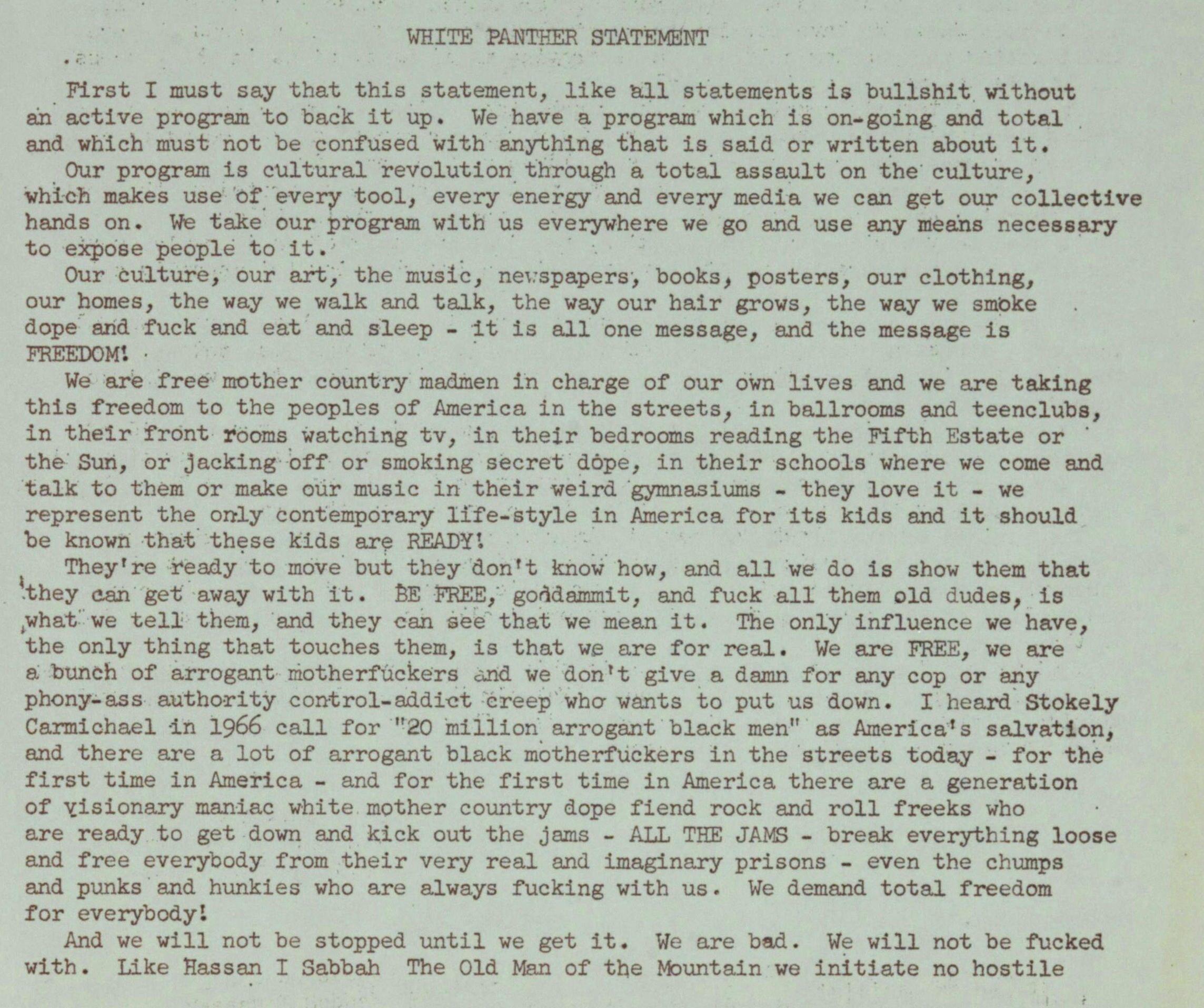 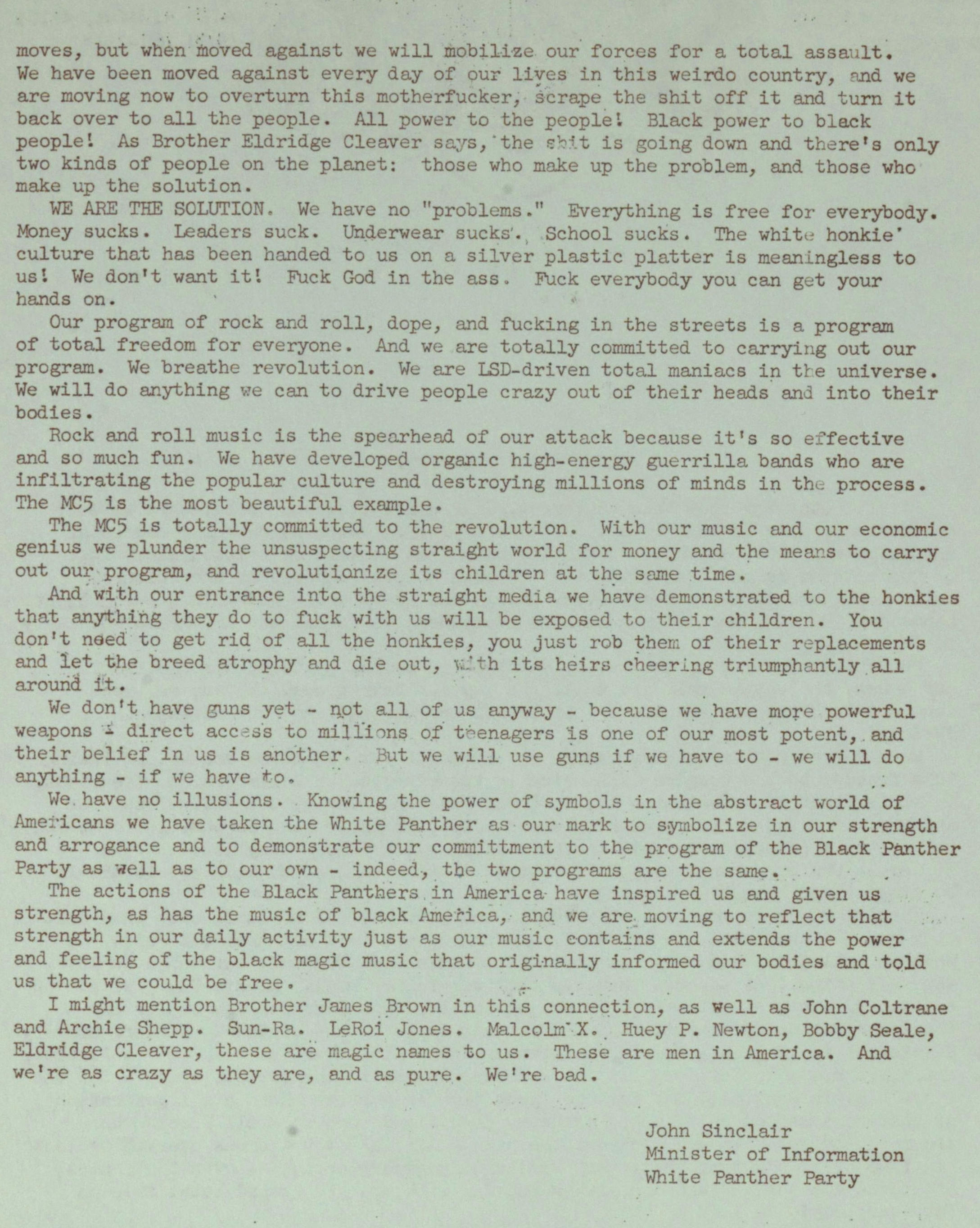 First I must say that this statement, like all statements is bullshit without an active program to back it up. We have a program which is on-going and total and which must not be confused with anything that is said or written about it.

Our program is cultural revolution through a total assault on the culture, which makes use of every tool, every energy and every media we can get our collective hands on. We take our program with us everywhere we go and use any means necessary to expose people to it.

Our culture, our art, the music, newspapers, books, posters, our clothing, our homes, the way we walk and talk, the way our hair grows, the way we smoke dope and fuck and eat and sleep--it is all one message, and the message is FREEDOM!

We are free mother country madmen in charge of our own lives and we are taking this freedom to the peoples of America in the streets, in ballrooms and teenclubs, in their front rooms watching tv, in their bedrooms reading the Fifth Estate or the Sun, or jacking off or smoking secret dope, in their schools where we come and talk to them or make our music in their weird gymnasiums--they love it--we represent the only contemporary life-style in America for its kids and it should be known that these kids are READY!

They're ready to move but they don 't know how, and all we do is show them that they can get away with it. BE FREE, goddammit, and fuck all them old dudes, is what we tell them, and they can see that we mean it. The only influence we have, the only thing that touches them, is that we are for real. We are FREE, we are a bunch of arrogant motherfuckers and we don 't give a damn for any cop or any phony-ass authority control-addict creep who wants to put us down. I heard Stokely Carmichael in 1966 call for "20 million arrogant black men" as America' s salvation, and there are a lot of arrogant black motherfuckers in the streets today--for the first time in America--and for the first time in America there are a generation of visionary maniac white mother country dope fiend rock and roll freaks who are ready to get down and kick out the jams--ALL THE JAMS--break everything loose and free everybody from their very real and imaginary prisons--even the chumps and punks and hunkies who are always fucking with us . We demand total freedom for everybody!

And we will not be stopped until we get it. We are bad. We will not be fucked with. Like Hassan I Sabbah The Old Man of the Mountain we initiate no hostile moves, but when moved against we will mobilize our forces for a total assault. We have been moved against every day of our lives in this weirdo country, and we are moving now to overturn this motherfucker, scrape the shit off it and turn it back over to all the people. All power to the people! Black power to black people! As Brother Eldridge Cleaver says, the shit is going down and there's only two kinds of people on the planet: those who make up the problem, and those who make up the solution.

WE ARE THE SOLUTION. We have no "problems." Everything is free for everybody. Money sucks. Leaders suck. Underwear sucks. School sucks. The white honkie culture that has been handed to us on a silver plastic platter is meaningless to us! We don't want it! Fuck God in the ass. Fuck everybody you can get your hands on.

Our program of rock and roll, dope, and fucking in the streets is a program of total freedom for everyone. And we are totally committed to carrying out our program. We breathe revolution. We are LSD-driven total maniacs in the universe. We will do anything we can to drive people crazy out of their heads and into their bodies.

Rock and roll music is the spearhead of our attack because it's so effective and so much fun. We have developed organic high-energy guerrilla bands who are infiltrating the popular culture and destroying millions of minds in the process. The MC5 is the most beautiful example.

The MC5 is totally committed to the revolution. With our music and our economic genius we plunder the unsuspecting straight world for money and the means to carry out our program, and revolutionize its children at the same time.

And with our entrance into the straight media we have demonstrated to the honkies that anything they do to fuck with us will be exposed to their children. You don't need to get rid of all the honkies, you just rob them of their replacements and let the breed atrophy and die out, with its heirs cheering triumphantly all around it.

We don't have guns yet--not all of us anyway--because we have more powerful weapons--direct access to millions of teenagers is one of our most potent, and their belief in us is another. But we will use guns if we have to--we will do anything--if we have to.

We have no illusions. Knowing the power of symbols in the abstract world of Americans we have taken the White Panther as our mark to symbolize in our strength and arrogance and to demonstrate our commitment to the program of the Black Panther Party as well as to our own--indeed, the two programs are the same.

The actions of the Black Panthers in America have inspired us and given us strength, as has the music of black America, and we are moving to reflect that strength in our daily activity just as our music contains and extends the power and feeling of the black magic music that originally informed our bodies and told us that we could be free.

I might mention Brother James Brown in this connection, as well as John Coltrane and Archie Shepp. Sun-Ra. LeRoi Jones. Malcolm X. Huey P. Newton, Bobby Seale, Eldridge Cleaver, these are magical names to us. These are men in America. And we're as crazy as they are, and as pure. We're bad.