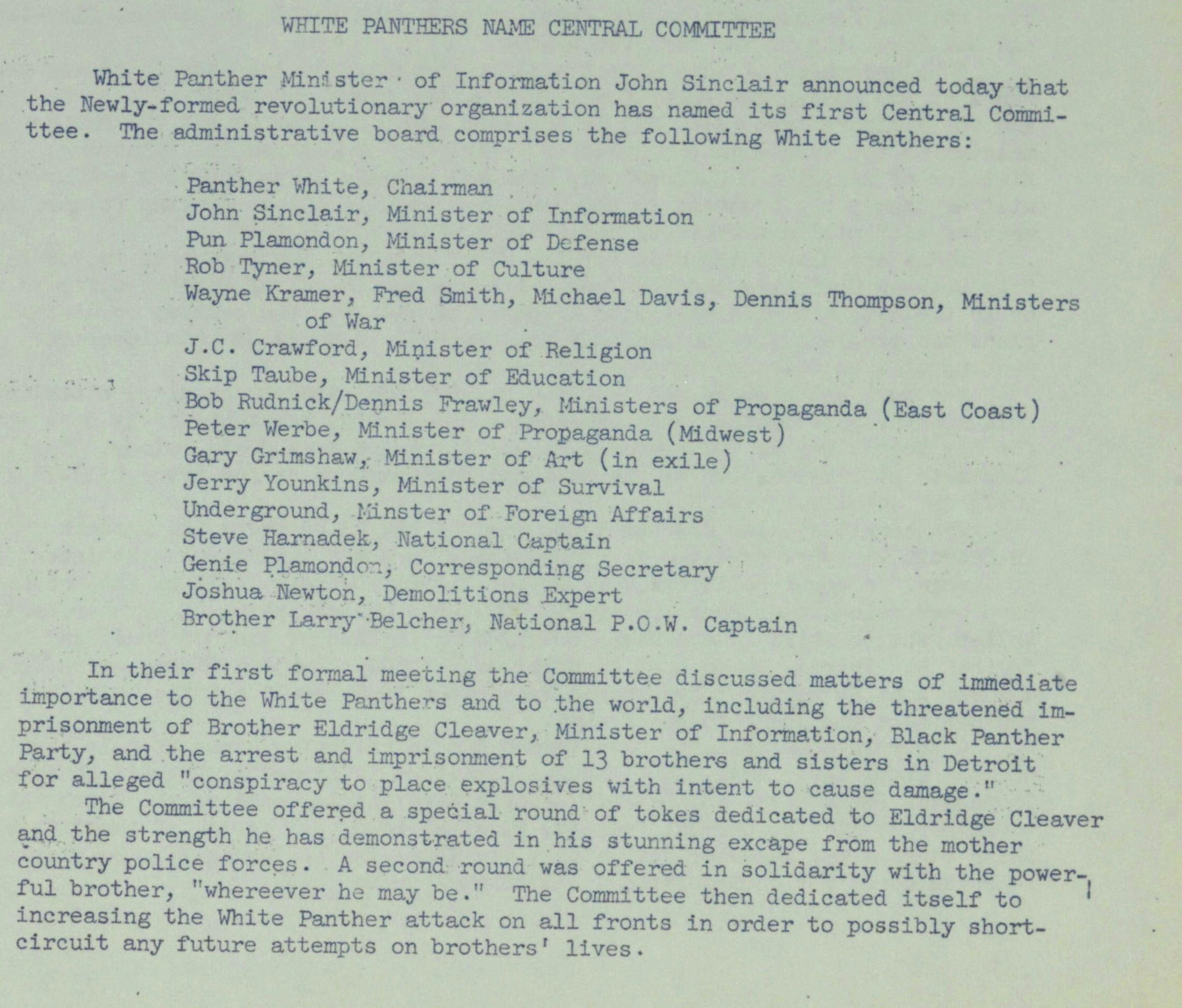 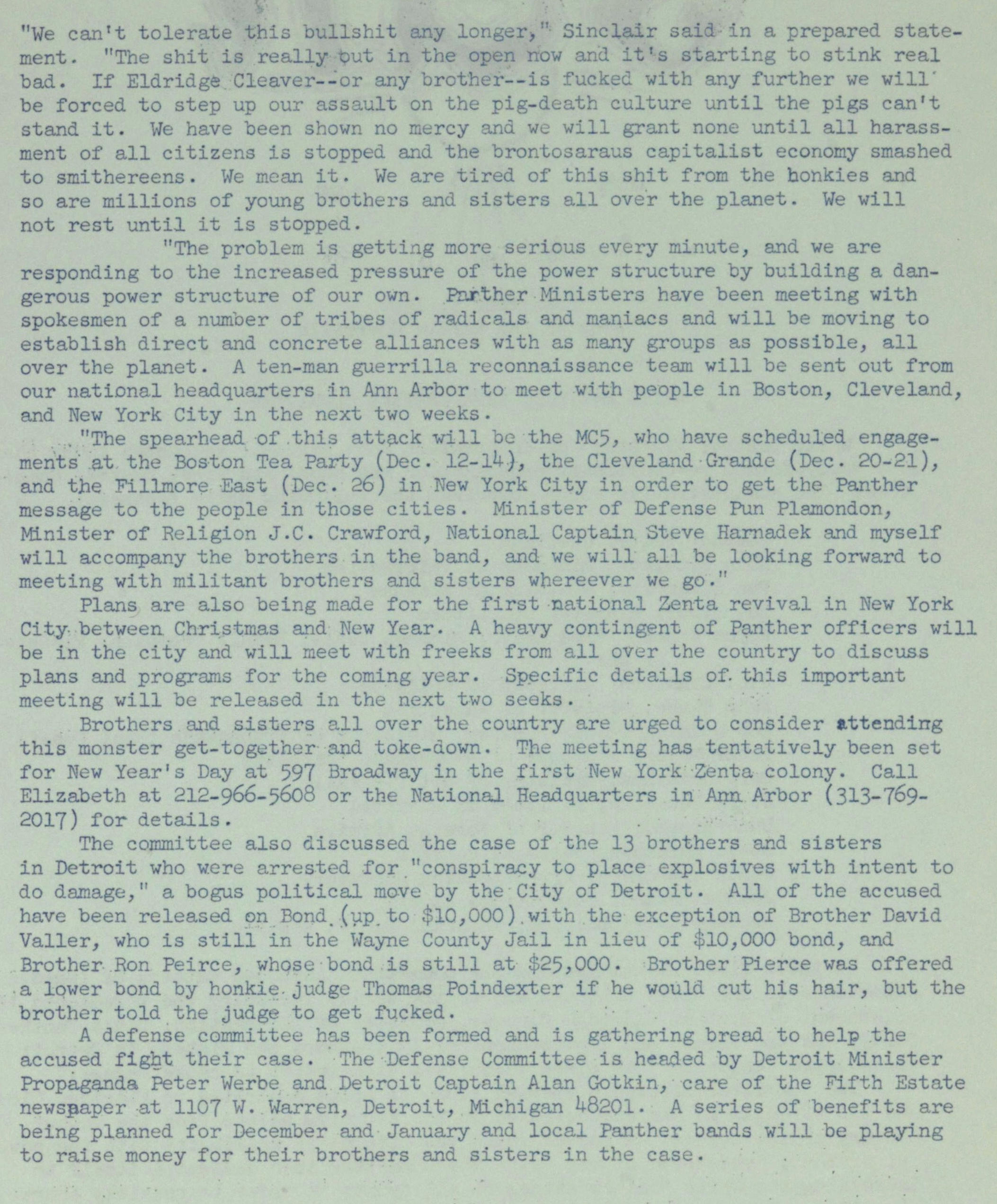 White Panther of Information John Sinclair announced today that the Newly-formed revolutionary organization has named its first Central Committee. The administrative board comprises the following White Panthers: Panther White, Chairman John Sinclair, Minister of Information Pun Plamondon, Minister of Dcfense Rob Tyner, Minister of Culture Wayne Kramer, Fred Smith, Michael Davis, Dennis Thompson, Ministers of War J.C. Crawford, Minister of Religión Skip Taube, Minister of Education Bob RudnickDennis Frawley, Ministers of Propaganda (East Coast) Peter Werbe, Minister of Propaganda (Midwest) Gary Grimshaw, Minister of Art (in exile) Jerry Younkins, Minister of Survival Underground, I-Iinster of Foreign Affairs Steve Harnadek, National Captain Genie Plamondon, Corresponding Secretary Joshua Newton, Demolitions .Expert Brother Larry'Belcher, National P.O.W. Captain In their first formal meeting the Committee discussed matters of immediate importance to the White Panthers and to the world, including the threatened impnsonment of Brother Eldridge Cleaver, Minister of Information, Black Panther Party, and the arrest and imprisonment of 13 brothere and sisters in Detroit for alleged "conspiracy to place explosives with intent to cause damage." The Committee offered a special round of tokes dedicated to Eldridge Cleaver and the strength he has demonstrated in his stunning excape from the mother country pólice f orces . A second round was offered in solidarity with the powerful brother, "whereever he may be." The Committee then dedicated itself to ' increasing the White Panther attack on all fronts in order to possibly shortcircuit any future attempts on brothers' lives . "We can 't tolérate this bullshit any longer" Sinclair said in a prepared statement. "The shit is really tput in the open rcow and it's starting to stink real bad. If Eldridge Cleaver--or any brother--is fucked with any further we will' be forced to step up our assault on the pig-death culture until the pigs can 't stand it. We have been shown no mercy and we will grant none until all harassment of all citizens is stopped and the brontosaraus capitalist economy smashed to smithereens . We mean it. We are tired of this shit f rom the honkies and so are millions of young brothers and sisters all over the planet. We will not rest until it is stopped. "The problem is getting more serious every minute, and we are responding to the increased pressure of the power structure by building a dangerous power structure of our own. Parther Ministers have been meeting with spokesmen of a number of tribes of radicáis and maniacs and will be moving to establish direct and concrete alliances with as many groups as possible, all over the planet. A ten-man guerrilla reconnaissance team will be sent out f rom our national headquarters in Ann Arbor to meet with people in Boston, Cleveland, and New York City in the next two weeks . "The spearhead of this attack will bc the MC5, who have scheduled engagements at the Boston Tea Party (Dec ik), the Cleveland Grande (Dec 20-21), and the Fillmore East (Dec. 26) in New York City in order to get the Panther message to the people in those cities . Minister of Def ense Pun Plamondon, Minister of Religión J.C. Crawford, National Captain Steve Harnadek and myself will accompany the brothers in the band, and we will all be looking forward to meeting with militant brothers and sisters whereever we go." Plans are also being made for the f irst national Zenta revival in New York City between Christmas and New Year. A heavy contingent of Panther officers will be in the city and will meet with freeks from all over the country to discuss plans and programs for the coming year. Specific details of. this important meeting will be released in the next two seeks . Brothers and sisters all over the country are urged to consider rttendirrg this monster get-together and toke-down. The meeting has tentatively been set for New Year 's Day at 597 Broadway in the f irst New York Zenta colony. Cali Elizabeth at 212-966-5008 or the National Headquarters in Ann. Arbor (313-7692017) for details. The committee also discussed the case of the 13 brothers and sisters in Detroit who were arrested for "conspiracy to place explosives with intent to do damage," a bogus political move by the City of Detroit. All of the accused have been released on Bond. (up. to $10,000) with the exception of Brother David Valler, who is still in the Wayne County Jail in lieu of $10,000 bond, and Brother Ron Peirce, whose bond is still at $25,000. Brother Pierce was offered a lower bond by honkie. judge Thomas Poindexter if he would cut his hair, but the brother told the judge to get fucked. A defense committee has been formed and is gathering bread to help the accused fight their case. The Defense Committee is hesded by Detroit Minister Propaganda Peter Werbe and Detroit Captain Alan Gotkin, care of the Fifth Estáte newspaper at 1107 W. Warren, Detroit, Michigan U8201. A series of benefits are being planned for December and January and local Panther bands will be playing to raise money for their brothers and sisters in the case .