Due to enormous economical difficulties ... 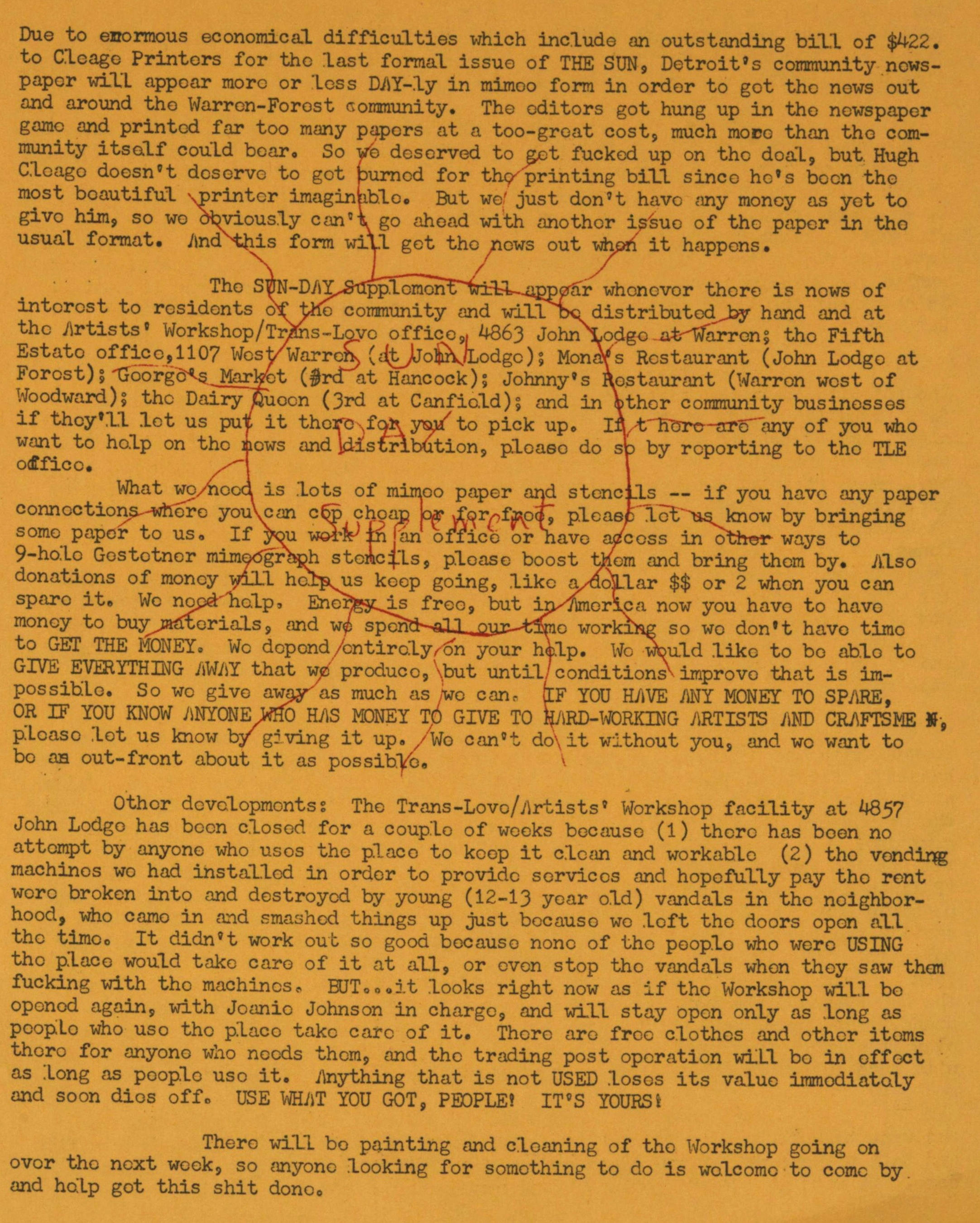 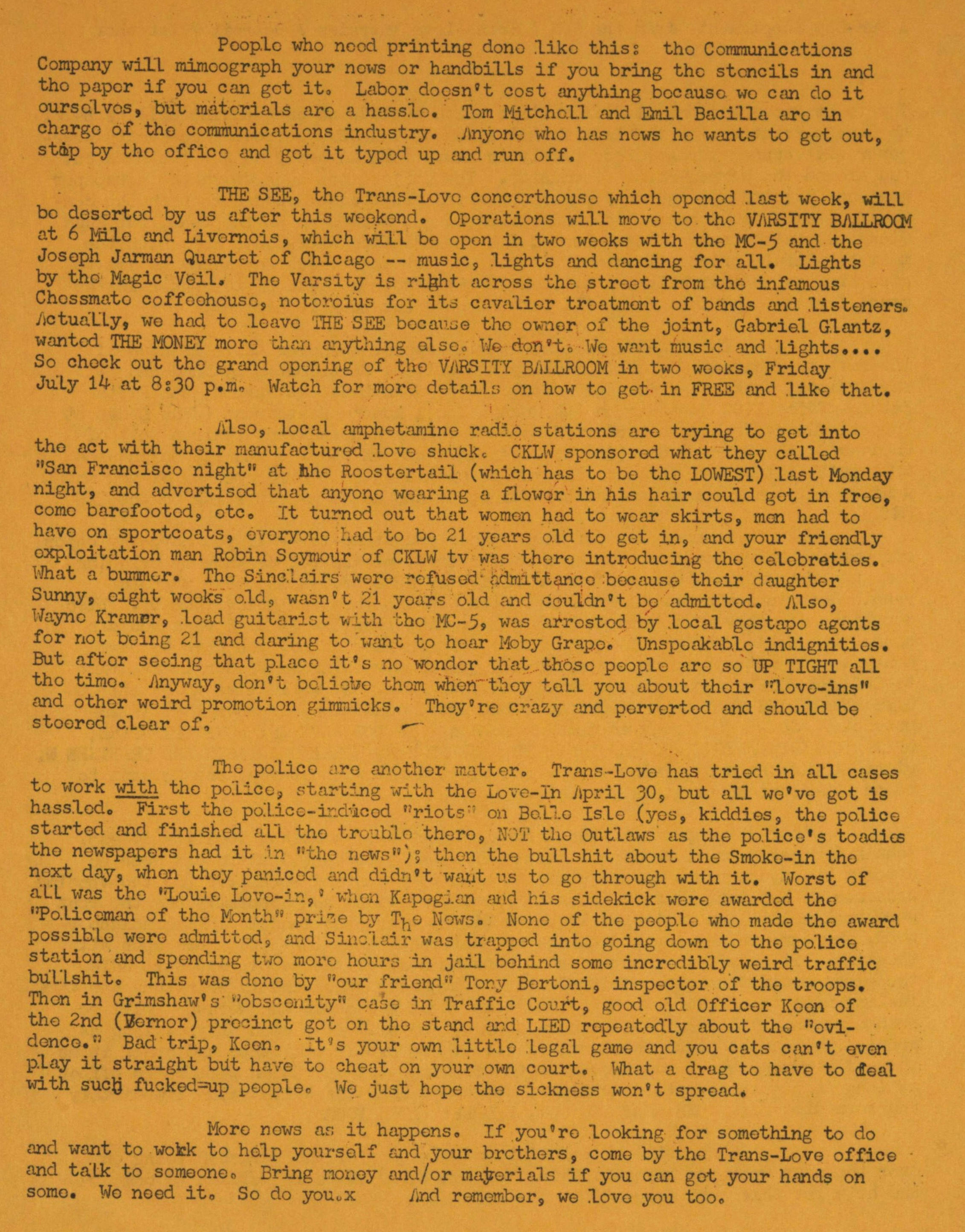 Due to enormous economical difficulties which include an outstanding bill of $422. to Cleage Printers for the last formal issue of THE SUN, Detroit 's community newspaper will appear more or less DAY-ly in mimeo form in order to get the news out and around the Warren-Forest community. The editors got hung up in the newspaper game and printed far too many papers at a too-great cost, much more than the community itself could bear. So we deserved to get fucked up on the deal, but Hugh Cleage doesn't deserve to get burned for the printing bill since he's been the most beautiful printer imaginable. But we just don't have any money as yet to give him, so we obviously can"t go ahead with another issue of the paper in the usual format.  And this form will get the news out when it happens.

The SUN-DAY supplement will appear whenever there is news of interest to residents of the community and will be distributed by hand and at the Artists Workshop/Trans-Love office, 4863 John Lodge at Warren; the Fifth Estate office, 1107 West Warren (at John Lodge); Mona's Restaurant (John Lodge at Forest); George's  Market (3rd at Hancock); Johnny's Restaurant (Warren west of Woodward); the Dairy Queen (3rd at Canfield); and in other community businesses if they'll let us put it there, for you to pick up.  If there are any of you who want to help on the news and distribution, please do so by reporting to the TLE office.

What we need is lots of mimeo paper and stencils -- if you have any paper connections where you can cop cheap for face, please let us know by bringing some paper to us. If you work in an office or have access in other ways to 9-hole Gestetner mimeograph stencils, please boost them and bring them by. Also donations of money will help us keep going, like a dollar $$ or 2 when you can spare it.  We need help.  Energy is free, but in America now you have to have money to buy materials, and we spend all are time working so we don't have time to GET THE MONEY.  We depend entirely on your help.  We would like to be able to GIVE EVERYTHING AWAY that we produce, but until conditions improve that is impossible.  So we give away as much as we can.  IF YOU HAVE ANY MONEY TO SPARE, OR IF YOU KNOW ANYONE WHO HAS MONEY TO GIVE TO HARD-WORKING ARTISTS AND CRAFTSMEN, please let us know by giving it up.  We can't do it without you, and we want to be as out-front about it as possible.

Other developments; The Trans-Love/Artists Workshop facility at 4857 John Lodge has been closed for a couple of weeks because (1) there has been no attempt by anyone who uses the place to keep it clean and workable (2) the vending machines we had installed in order to provide services and hopefully pay the rent were broken into and destroyed by young (12-13 year old) vandals in the neighborhood, who came in and smashed things up just because we left the doors open all the time.  It didn't work out so good because none of the people who were USING the place would take care of it at all, or even stop the vandals when they saw them fucking with the machines, BUT.....it looks right now as if the Workshop will be opened again, with Jeanie Johnson in charge, and will stay open only as long as people who use the place take care of it. There are free clothes and other items there for anyone who needs them, and the trading post operation will be in effect as long as people use it.  Anything that is not USED loses its value immediately and soon dies off USE WHAT YOU GOT, PEOPLE!  IT'S YOURS!

There will be painting and cleaning of the Workshop going on over the next week, so anyone looking for something to do is welcome to come by and help get this shit done.

People who need printing done like this:  the Communications Company will mimeograph your news or handbills if you bring the stencils in and the paper if you can get it.  Labor doesn't cost anything because we can do it ourselves, but materials are a hassle.  Tom Mitchell and Emil Bacilla are in charge of the communications industry.  Anyone who has news he wants to get out, stop by the office and get it typed up and run off.

THE SEE, the Trans-Love concerthouse which opened last week, will be deserted by us after this weekend.  Operations will move to the VARSITY BALLROOM at 6 Mile and Livernois, which will be open in two weeks with the MC-5 and the Joseph Jarman Quartet of Chicago -- music, lights and dancing for all.  Lights by the Magic Veil. Tho Varsity is right across the street from the infamous Chessmate coffeehouse, notorious for its cavalier treatment of bands and listeners.  Actually, we had to leave THE SEE because the owner of the joint, Gabriel Glantz, wanted THE MONEY more then anything else.  We don't.  We want music and lights.... So check out the grand opening of the VARSITY BALLROOM in two weeks, Friday July 14 at 8:30 p.m.  Watch for more details on how to get in FREE and like that.

Also, local amphetamine radio stations are trying to get into the act with their manufactured love shuck.  CKLW sponsored what they called "San Francisco night" at the Roostertail (which has to be the LOWEST) last Monday night, and advertised that anyone wearing a flower in his hair could got in free, come barefooted, etc.  It turned out that women had to wear skirts, men had to have on sport coats, everyone had to be 21 years old to get in, and your friendly exploitation man Robin Seymour of CKLW tv was there introducing the celebrities.  What a bummer. The Sinclairs were refused admittance because their daughter Sunny, eight weeks old, wasn't 21 years old and couldn't be admitted.  Also, Wayne Kramer, lead guitarist with the MC-5, was arrested by local gestapo agents for not being 21 and daring to want to hear Moby Grape.  Unspeakable indignities.  But after seeing that place it's no wonder that those people are so UP TIGHT all the time.  Anyway, don't believe them when they tell you about their "love-ins" and other weird promotion gimmicks.  They're crazy and perverted and should be steered clear of.

The police are another matter.  Trans-Love has tried in all cases to work with the police, starting with the Love-In April 30, but all we've got is hassled.  First the police-induced "riots" on Belle Isle (yes, kiddies, the police started and finished all the trouble there, NOT the Outlaws as the police's toadies the newspapers had it in "the news"); then the bullshit about the Smoke-in the next day, when they panicked and didn't want us to go through with it.  Worst of all was the "Louie Love-in," when Kapogian and his sidekick were awarded the "Policeman of the Month" prize by The News.  None of the people who made the award possible were admitted, and Sinclair was trapped into going down to the police station and spending two more hours in jail behind some incredibly weird traffic bullshit.  This was done by "our friend" Tony Bertoni, inspector of the troops.  Then in Grimshaw's "obscenity" case in Traffic Court, good old Officer Koon of the 2nd (Vernor) precinct got on the stand and LIED repeatedly about the "evidence."  Bad trip, Koon.  It's your own little legal game and you cats can't even play it straight but have to cheat on your own court.  What a drag to have to deal with such fucked=up people.  We just hope the sickness won't spread.

More news as it happens.  If you're looking for something to do and want to work to help yourself and your brothers, come by the Trans-Love office and talk to someone.  Bring money and/or materials if you can got your hands on some.  We need it.  So do you.  And remember, we love you too.