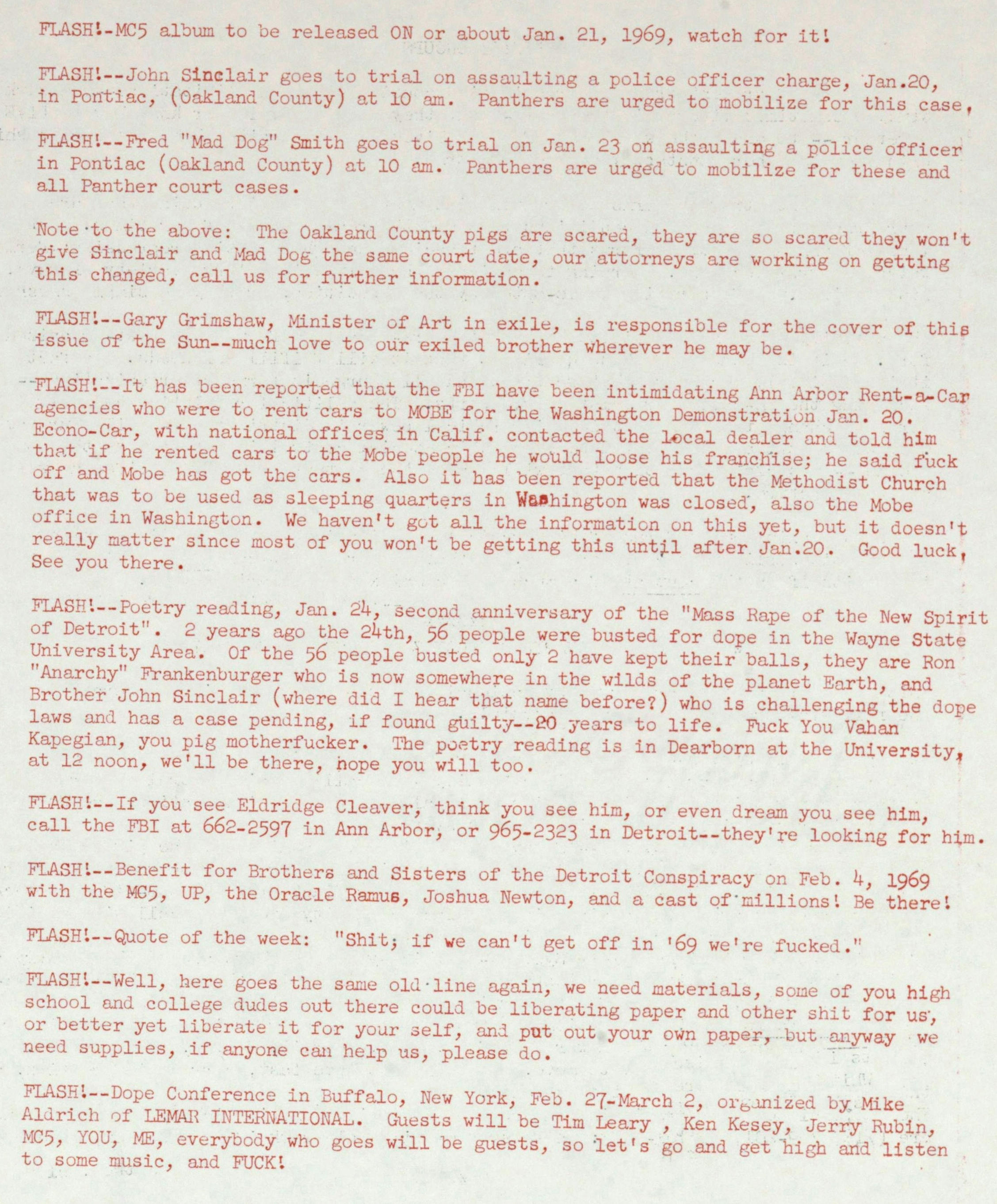 FLASH!--John Sinclair goes to trial on assaulting a police officer charge, Jan. 20, in Pontiac, (Oakland County) at 10 am. Panthers are urged to mobilize for this case.

FLASH!--Fred "Mad Dog" Smith goes to trial on Jan. 23 on assaulting a police officer in Pontiac (Oakland County) at 10 am. Panthers are urged to mobilize for these and all Panther court cases.

Note-to the above:  The Oakland County pigs are scared, they are so scared they won't give Sinclair and Mad Dog the same court date, our attorneys are working on getting this changed, call us for further information.

FLASH!--Gary Grimshaw, Minister of Art in exile, is responsible for the cover of this issue of the Sun--much love to our exiled brother wherever he may be.

FLASH!--It has been reported that the FBI have been intimidating Ann Arbor Rent-a-Car agencies who were to rent cars to MOBE for the Washington Demonstration Jan. 20.  Econo-Car, with national offices in Calif. contacted the local dealer and told him that if he rented cars to the Mobe people he would lose his franchise; he said fuck off and Mobe has got the cars.  Also it has been reported that the Methodist Church that was to be used as sleeping quarters in Washington was closed, also the Mobe office in Washington.  We haven't got all the information on this yet, but it doesn't really matter since most of you won't be getting this until after Jan. 20.  Good luck.  See you there.

FLASH!--Poetry reading, Jan. 24, second anniversary of the "Mass Rape of the New Spirit of Detroit".  2 years ago the 24th, 56 people were busted for dope in the Wayne State University Area.  Of the 56 people busted only 2 have kept their balls, they are Ron "Anarchy" Frankenburger who is now somewhere in the wilds of the planet Earth and Brother John Sinclair (where did I hear that name before?) who is challenging the dope laws and has a case pending, if found guilty--20 years to life.  Fuck You Vahan Kapegian, you pig motherfucker.  The poetry reading is in Dearborn at the University, at 12 noon, we'll be there, hope you will too.

FLASH!--Benefit for Brothers and Sisters of the Detroit Conspiracy on Feb. 4, 1969 with the MC5, UP, the Oracle Ramus, Joshua Newton, and a cast of millions!  Be there!

FLASH!--Well, here goes the same old line again, we need materials, some of you high school and college dudes out there could be liberating paper and other shit for us, or better yet liberate it for yourself, and put out your own paper, anyway we need supplies, if anyone can help us, please do.

FLASH!--Dope Conference in Buffalo, New York, Feb. 27-March 2, organized by Mike Aldrich of LEMAR INTERNATIONAL.  Guests will be Tim Leary, Ken Kesey, Jerry Rubin, MC5, YOU, ME, everybody who goes will be guests, so let's go and get high and listen to some music, and FUCK!