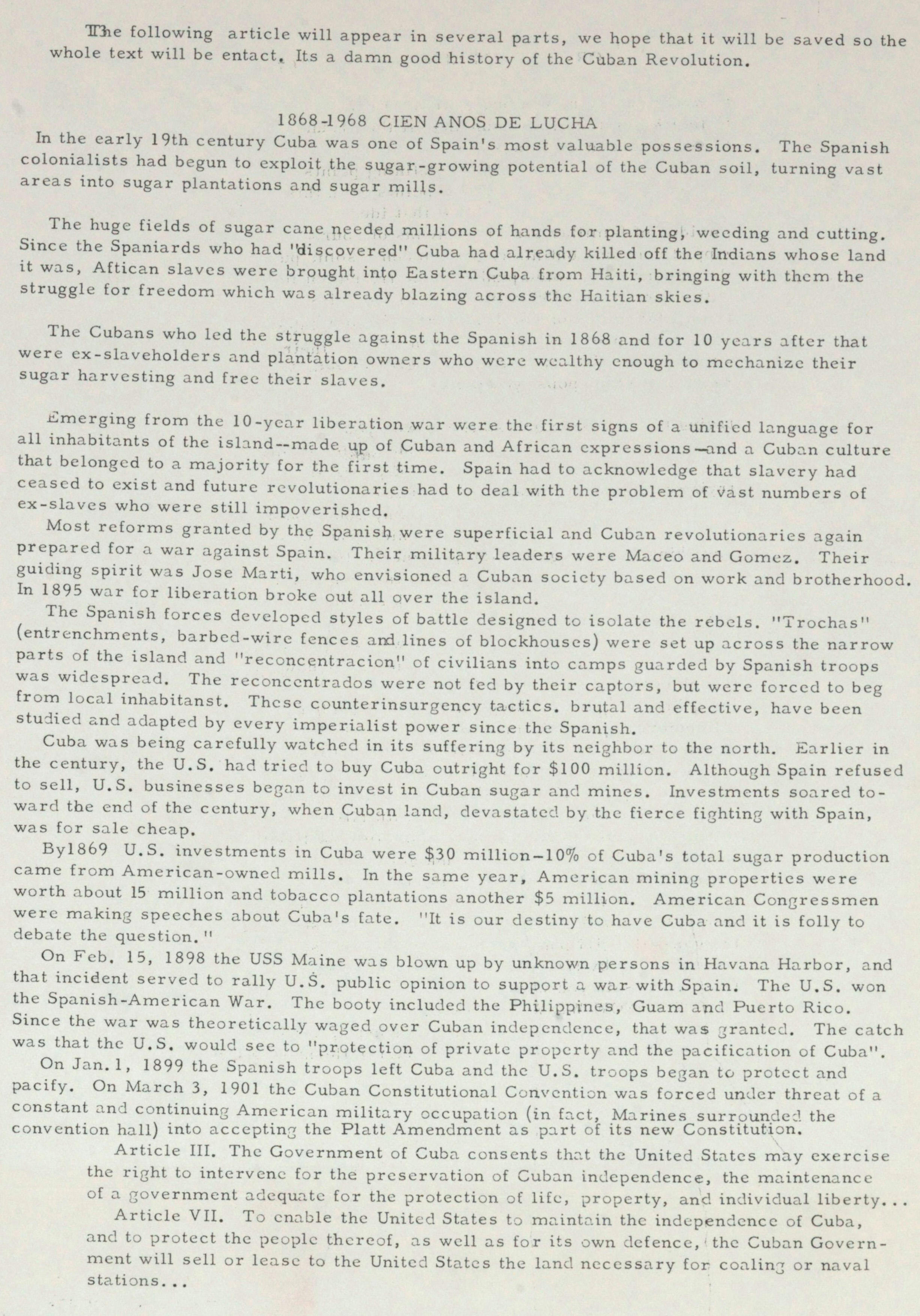 The following article will appear in several parts, we hope that it will be saved so the whole text will be intact, its a damn good history of the Cuban Revolution.

In the early 19th century Cuba was one of Spain's most valuable possessions. The Spanish colonialists had begun to exploit the sugar-growing potential of the Cuban soil, turning vast areas into sugar plantations and sugar mills.

The huge fields of sugar cane needed millions of hands for planting, weeding and cutting. Since the Spaniards who had "discovered" Cuba had already killed off the Indians whose land it was, African slaves were brought into Eastern Cuba from Haiti, bringing with them the struggle for freedom which was already blazing across the Haitian skies.

The Cubans who led the struggle against the Spanish in 1868 and for 10 years after that were ex-slaveholders and plantation owners who were wealthy enough to mechanize their sugar harvesting and free their slaves.

Emerging from the 10-year liberation war were the first signs of a unified language for all inhabitants of the island--made up of Cuban and African expressions--and a Cuban culture that belonged to a majority for the first time. Spain had to acknowledge that slavery had ceased to exist and future revolutionaries had to deal with the problem of vast numbers of ex-slaves who were still impoverished.

Most reforms granted by the Spanish were superficial and Cuban revolutionaries again prepared for war against Spain. Their military leaders were Maceo and Gomez. Their guiding spirit was Jose Marti, who envisioned a Cuban society based on work and brotherhood. In 1895 war for liberation broke out all over the island.

The Spanish forces developed styles of battle designed to isolate the rebels. "Trochas" (entrenchments, barbed-wire fences and lines of blockhouses) were set up across the narrow parts of the island and "reconcentracion" of civilians into camps guarded by Spanish troops was widespread. The reconcentrados were not fed by their captors, but were forced to beg from local inhabitants. These counterinsurgency tactics, brutal and effective, have been studied and adapted by every imperialist power since the Spanish.

Cuba was being carefully watched in its suffering by its neighbor to the north. Earlier in the century, the U.S. had tried to buy Cuba outright for $100 million. Although Spain refused to sell, U.S. businesses began to invest in Cuban sugar and mines. Investments soared toward the end of the century, when Cuban land, devastated by the fierce fighting with Spain, was for sale cheap.

By 1869 U.S. investments in Cuba were $30 million--10% of Cuba's total sugar production came from American-owned mills. In the same year, American mining properties were worth about 15 million and tobacco plantations another $5 million. American Congressmen were making speeches about Cuba's fate. "It is our destiny to have Cuba and it is folly to debate the question."

On Feb. 15, 1898 the USS Maine was blown up by unknown persons in Havana Harbor, and that incident served to rally U.S. public opinion to support a war with Spain. The U.S. won the Spanish-American War. The booty included the Philippines, Guam, and Puerto Rico. Since the war was theoretically waged over Cuban independence, that was granted. The catch was that the U.S. would see to "protection of private property and the pacification of Cuba".

On Jan. 1, 1899 the Spanish troops left Cuba and the U.S. troops began to protect and pacify. On March 3, 1901 the Cuban Constitutional Convention was forced under threat of a constant and continuing American military occupation (in fact, Marines surrounded the convention hall) into accepting the Platt Amendment as part of its new Constitution.

Article III. The Government of Cuba consents that the United States may exercise the right to intervene for the preservation of Cuban independence, the maintenance of a government adequate for the protection of life, property, and individual liberty...

Article VII. To enable the United States to maintain the independence of Cuba, and to protect the people thereof, as well as for its own defense, the Cuban government will sell or lease to the United States the land necessary for coaling of naval stations...