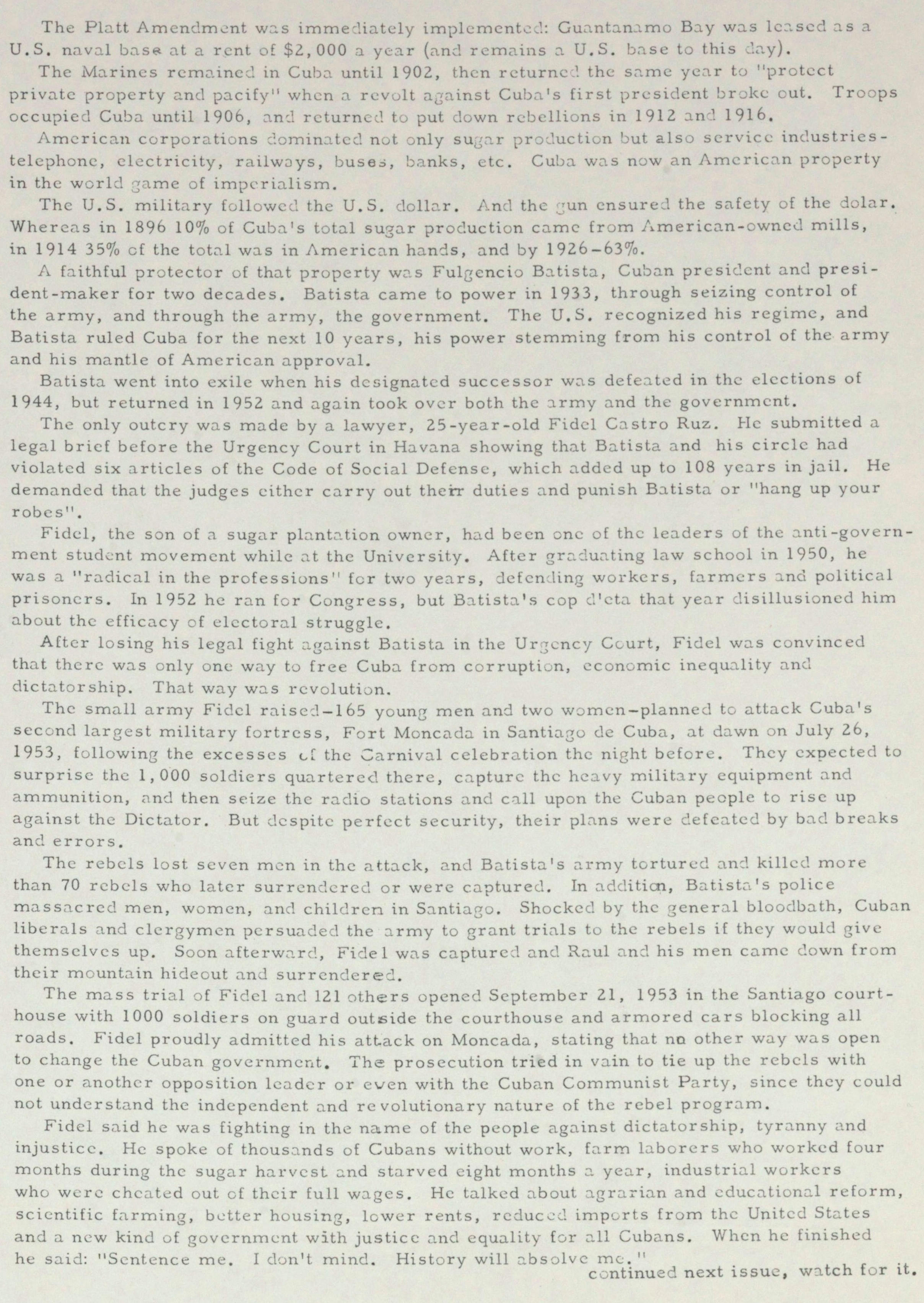 The Platt Amendment was immediately implemented: Guantanamo Bay was leased as a U.S. naval base at a rent of $2,000 a year (and remains a U.S. base to this day).

The Marines remained in Cuba until 1902, then returned the same year to "protect private property and pacify" when a revolt against Cuba's first president broke out. Troops occupied Cuba until 1906, and returned to put down rebellions in 1912 and 1916.

A faithful protector of that property was Fulgencio Batista, Cuban president and president-maker for two decades. Batista came to power in 1933, through seizing control of the army, and through the army, the government. The U.S. recognized his regime, and Batista ruled Cuba for the next 10 years, his power stemming from his control of the army and his mantle of American approval.

Batista went into exile when his designated successor was defeated in the elections of 1944, but returned in 1952 and again took over both the army and the government.

The only outcry was made by a lawyer, 25-year-old Fidel Castro Ruz. He submitted a legal brief before the Urgency Court in Havana showing that Batista and his circle had violated six articles of the Code of Social Defense, which added up to 108 years in jail. He demanded that the judges either carry out their duties and punish Batista or "hang up your robes".

Fidel, the son of a sugar plantation owner, had been one of the leaders of the anti-government student movement while at the University. After graduating law school in 1950, he was a "radical in the professions" for two years, defending workers, farmers and political prisoners. In 1952 he ran for Congress, but Batista's cop d'eta that year disillusioned him about the efficacy of electoral struggle.

After losing his legal fight against Batista in the Urgency Court, Fidel was convinced that there was only one way to free Cuba from corruption, economic inequality and dictatorship. That way was revolution.

The small army Fidel raised--165 young men and two women--planned to attack Cuba's second largest military fortress, Fort Moncada in Santiago de Cuba, at dawn on July 26, 1953, following the excesses of the Carnival celebration the night before. They expected to surprise the 1,000 soldiers quartered there, capture the heavy military equipment and ammunition, and then seize the radio stations and call upon the Cuban people to rise up against the Dictator. But despite perfect security, their plans were defeated by bad breaks and errors.

The rebels lost seven men in the attack, and Batista's army tortured and killed more than 70 rebels who later surrendered or were captured. In addition, Batista's police massacred men, women, and children in Santiago. Shocked by the general bloodbath, Cuban liberals and clergymen persuaded the army to grant trials to the rebels if they would give themselves up. Soon afterward, Fidel was captured and Raul and his men came down from their mountain hideout and surrendered.

The mass trial of Fidel and 121 others opened September 21, 1953 in the Santiago courthouse with 1000 soldiers on guard outside the courthouse and armored cars blocking all roads. Fidel proudly admitted his attack on Moncada, stating that no other way was open to change the Cuban government. The prosecution tried in vain to tie up the rebels with one or another opposition leader or even with the Cuban Communist Party, since they could not understand the independent and revolutionary nature of the rebel program.

Fidel said he was fighting in the name of the people against dictatorship, tyranny and injustice. He spoke of thousands of Cubans without work, farm laborers who worked four months during the sugar harvest and starved eight months a year, industrial workers who were cheated out of their full wages. He talked about agrarian and educational reform, scientific farming, better housing, lower rents, reduced import from the United States and a new kind of government with just and equality for all Cubans. When he finished he said: "Sentence me. I don't mind. History will absolve me."

continued next issue, watch for it.