All Power To All The People 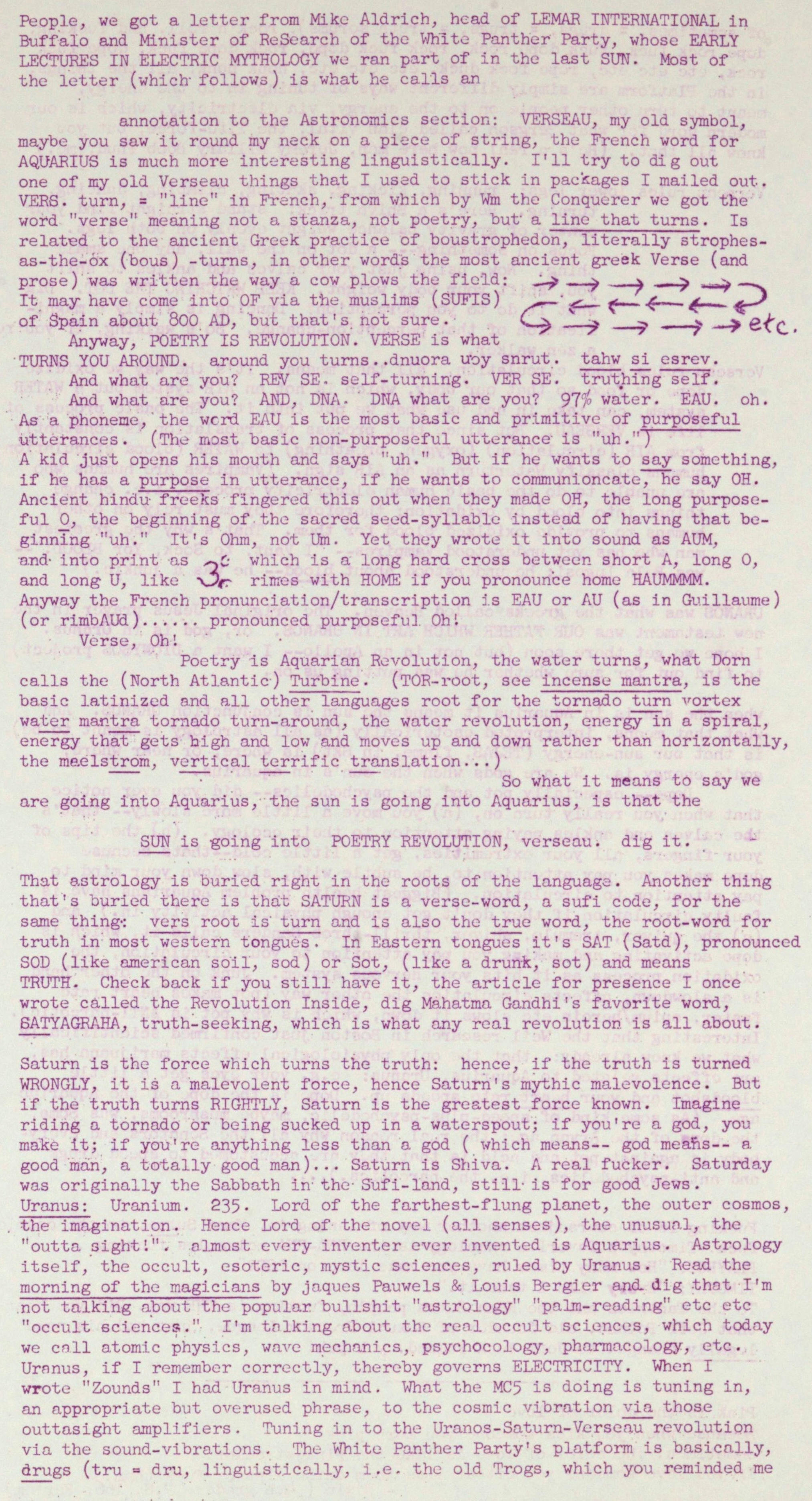 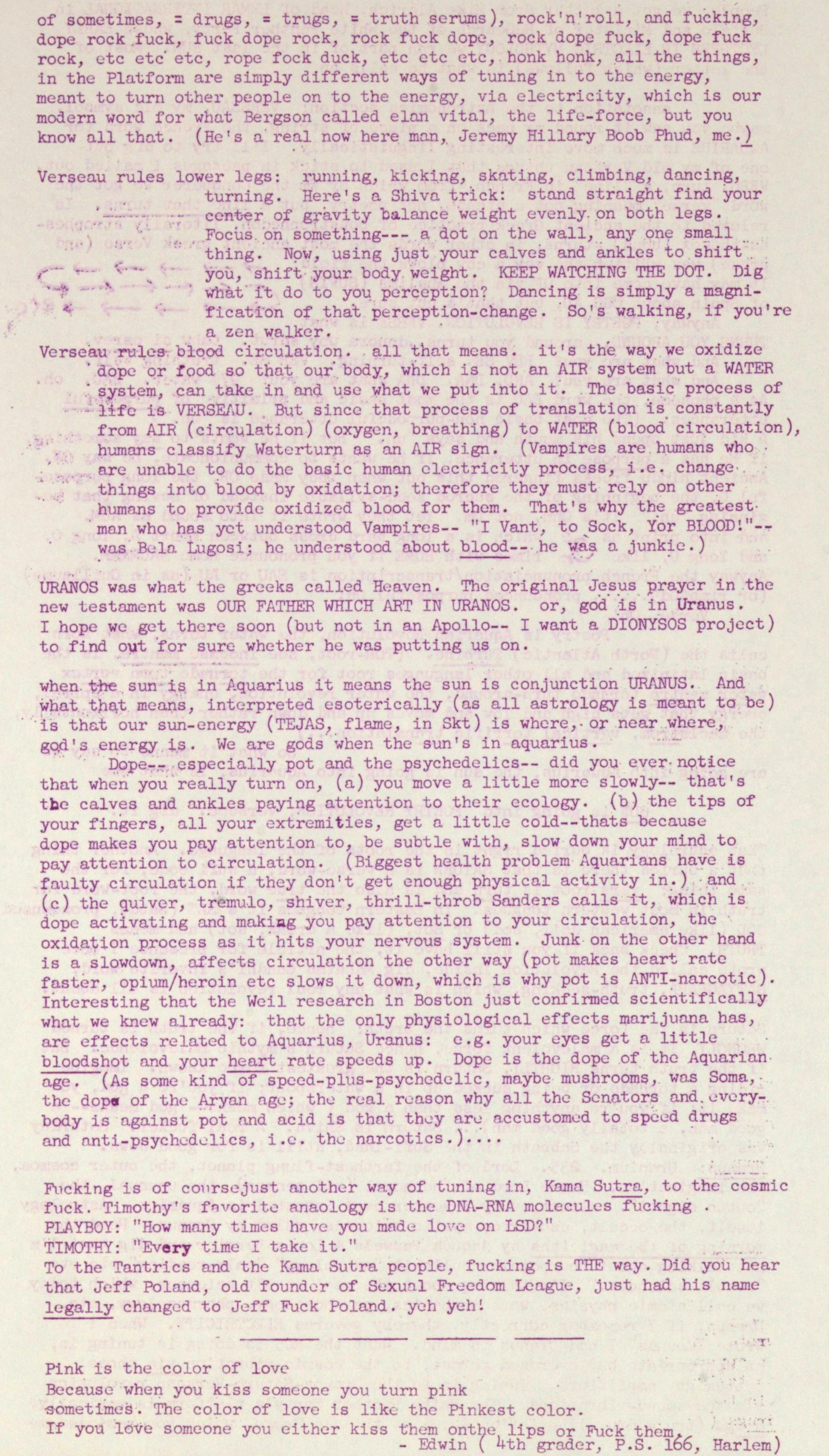 ALL POWER TO ALL THE PEOPLE

Now the cock crows, dawn breaks over the world.

And from a thousand places arises a swelling music,

Never were poets so inspired!

PeopIe, we got a letter from Mike Aldrich, head of LEMAR INTERNATIONAL in Buffalo and Minister of ReSearch of the White Panther Party, whose EARLY LECTURES IN ELECTRIC MYTHOLOGY we ran part of in the last SUN. Most of the letter (which follows) is what he calls an

annotation to the Astronomics section: VERSEAU, my old symbol, maybe you saw it round my neck on a piece of string, the French word for AQUARIUS is much more interesting linguistically. I'll try to dig out one of my old Verseau things that I used to stick in packages I mailed out. VERS. turn, = "line" in French from which by Wm the Conquerer we got the word "verse" meaning not a stanza, not poetry, but a line that turns . Is related to the ancient Greek practice of boustrophedon, literally strophes-as-the-ox (bous) -turns, in other words the most ancient Greek Verse (and prose) was written the way a cow plows the field:

It may have come into OF via the muslims (SUFIS) of Spain about 800 AD, but that's not sure.

Anyway, POETRY IS REVOLUTION. VERSE is what TURNS YOU AROUND. around you turns . .dnuora uoy snrut . tahw si esrev. And what are you? REV SE. self-turning. VER SE. truthing self. And what are you? AND, DNA.  DNA what are you? 97% water. EAU. oh. As a phoneme, the word EAU is the most basic and primitive of purposeful utterances . (The most basic non-purposeful utterance is "uh.") A kid just opens his mouth and says "uh." But if he wants to say something, if he has a purpose in utterance, if he wants to communioncate, he say OH. Ancient hindu freeks fingered this out when they made OH, the long purposeful O, the beginning of the sacred seed-syllable instead of having that beginning "uh." It's Ohm, not Um. Yet they wrote it into sound as AUM, into print as *symbol* which is a long hard cross between short A, long 0, and long U, like rimes with HOME if you pronounce home HAUMMMM. Anyway the French pronunciation/transcription is EAU or AU (as in Guillaume) (or rimbAUd)..... pronounced purposeful Oh!

Poetry is Aquarian Revolution, the water turns, what Dorn calls the (North Atlantic) Turbine. (TOR-root, see incense mantra, is the basic latinized and all other languages root for the tornado turn vortex water mantra tornado turn-around, the water revolution, energy in a spiral, energy that gets high and low and moves up and down rather than horizontally, the maelstrom, vertical terrific translation. . . )

SUN is going into POETRY REVOLUTION, verseau. dig it.

That astrology is buried right in the roots of the language. Another thing that's buried there is that SATURN is a verse-word, a sufi code, for the same thing: vers root is turn and is also the true word, the root-word for truth in most western tongues. In Eastern tongues it's SAT (Satd), pronounced SOD (like american soil, sod) or Sot, (like a drunk, sot) and means TRUTH.  Check back if you still have it, the article for presence I once wrote called the Revolution Inside, dig Mahatma Gandhi's favorite word, SATYAGRAHA, truth-seeking, which is what any real revolution is all about.

Saturn is the force which turns the truth: hence, if the truth is turned WRONGLY, it is a malevolent force, hence Saturn 's mythic malevolence.  But if the truth turns RIGHTLY, Saturn is the greatest force known. Imagine riding a tornado or being sucked up in a waterspout; if you're a god, you make it; if you're anything less than a god (which means - god means--a good man, a totally good man)... Saturn is Shiva. A real fucker. Saturday was originally the Sabbath in the Sufi-land, still is for good Jews.

Uranus: Uranium. 235.  Lord of the farthest-flung planet, the outer cosmos, the imagination. Hence Lord of the novel (all senses), the unusual, the "outta sight!", almost every inventor ever invented is Aquarius. Astrology itself, the occult, esoteric, mystic sciences, ruled by Uranus. Read the Morning of the Magicians by Jaques Pauwels & Louis Bergier and dig that I'm not talking about the popular bullshit "astrology" "palm-reading" etc etc "occult sciences." I'm talking about the real occult sciences, which today we call atomic physics, wave mechanics, psychology, pharmacology, etc. Uranus, if I remember correctly, thereby governs ELECTRICITY. When I wrote "Zounds" I had Uranus in mind. What the MC5 is doing is tuning in, an appropriate but overused phrase, to the cosmic vibration via those outtasight amplifiers. Tuning in to the Uranus-Saturn-Verseau revolution via the sound-vibrations. The White Panther Party's platform is basically, drugs (tru = dra, linguistically, i.e. the old Trogs, which you reminded me of sometimes, = drugs, = trugs, = truth serums), rock'n'roll, and fucking, dope rock fuck, fuck dope rock, rock fuck dope, rock dope fuck, dope fuck rock, etc etc etc, rope fock duck, etc etc etc, honk honk, all the things, in the Platform are simply different ways of tuning in to the energy, meant to turn other people on to the energy, via electricity, which is our modern word for what Bergson called elan vital, the life-force, but you know all that. (He 's a real now here man, Jeremy Hillary Boob Phud, me.)

Verseau rules lower legs: running, kicking, skating, climbing, dancing, turning. Here's a Shiva trick: stand straight find your center of gravity balance weight evenly on both legs. Focus on something--a dot on the wall, any one small thing. Now, using just your calves and ankles to shift you, shift your body weight. KEEP WATCHING THE DOT. Dig what it do to your perception? Dancing is simply a magnification of that perception-change. So's walking, if you're a zen walker.

Verseau rules blood circulation. all that means . it's the way we oxidize dope or food so that our body, which is not an AIR system but a WATER system, can take in and use what we put into it. The basic process of life is VERSEAU. But since that process of translation is constantly from AIR (circulation) (oxygen, breathing) to WATER (blood circulation), humans classify Waterturn as an AIR sign. (Vampires are humans who are unable to do the basic human electricity process, i.e. change things into blood by oxidation; therefore they must rely on other humans to provide oxidized blood for them. That's why the greatest man who has yet understood Vampires--"I Vant, to Sock, Yor BLOOD!"-was Bela Lugosi; he understood about he was a junkie.)

URANOS was what the Greeks called Heaven. The original Jesus prayer in the new testament was OUR FATHER WHICH ART IN URANOS, or, god is in Uranus . I hope we get there soon (but not in an Apollo - I want a DIONYSOS project) to find out for sure whether he was putting us on.

When the sun is in Aquarius it means the sun is conjunction URANUS. And what that means, interpreted esoterically (as all astrology is meant to be) is that our sun-energy (TEJAS, flame, in Skt ) is where,or near where, god's energy is. We are gods when the sun's in aquarius.

Dope- especially pot and the psychedelics - did you ever notice that when you really turn on, (a) you move a little more slowly--that's the calves and ankles paying attention to their ecology. (b) the tips of your fingers, all your extremities, get a little cold--that's because dope makes you pay attention to, be subtle with, slow down your mind to pay attention to circulation. (Biggest health problem Aquarians have is faulty circulation if they don't get enough physical activity in.) and (c) the quiver, tremulo, shiver, thrill-throb Sanders calls it, which is dope activating and making you pay attention to your circulation, the oxidation process as it hits your nervous system. Junk on the other hand is a slowdown, affects circulation the other way (pot makes heart rate faster, opium/heroin etc slows it down, which is why pot is ANTI-narcotic). Interesting that the Weil research in Boston just confirmed scientifically what we knew already: that the only physiological effects marijuana has, are effects related to Aquarius, Uranus: e.g. your eyes get a little bloodshot and your heart rate speeds up. Dope is the dope of the Aquarian age . (As some kind of speed-plus-psychedelic, maybe mushrooms, was Soma, the dope of the Aryan age; the real reason why all the Senators and everybody is against pot and acid is that they are accustomed to speed drugs and anti-psychedelics, i.e. the narcotics .)....

Fucking is of course just another way of tuning in, Kama Sutra, to the cosmic fuck. Timothy's favorite analogy is the DNA-RNA molecules fucking.

PLAYBOY: "How many times have you made love on LSD?"

TIMOTHY: "Every time I take it."

To the Tantrics and the Kama Sutra people, fucking is THE way. Did you hear that Jeff Poland, old founder of Sexual Freedom League, just had his name legally changed to Jeff Fuck Poland, yeh yeh!

Pink is the color of love

Because when you kiss someone you turn pink

sometimes. The color of love is like the Pinkest color.

If you love someone you either kiss hem on the lips or Fuck them.