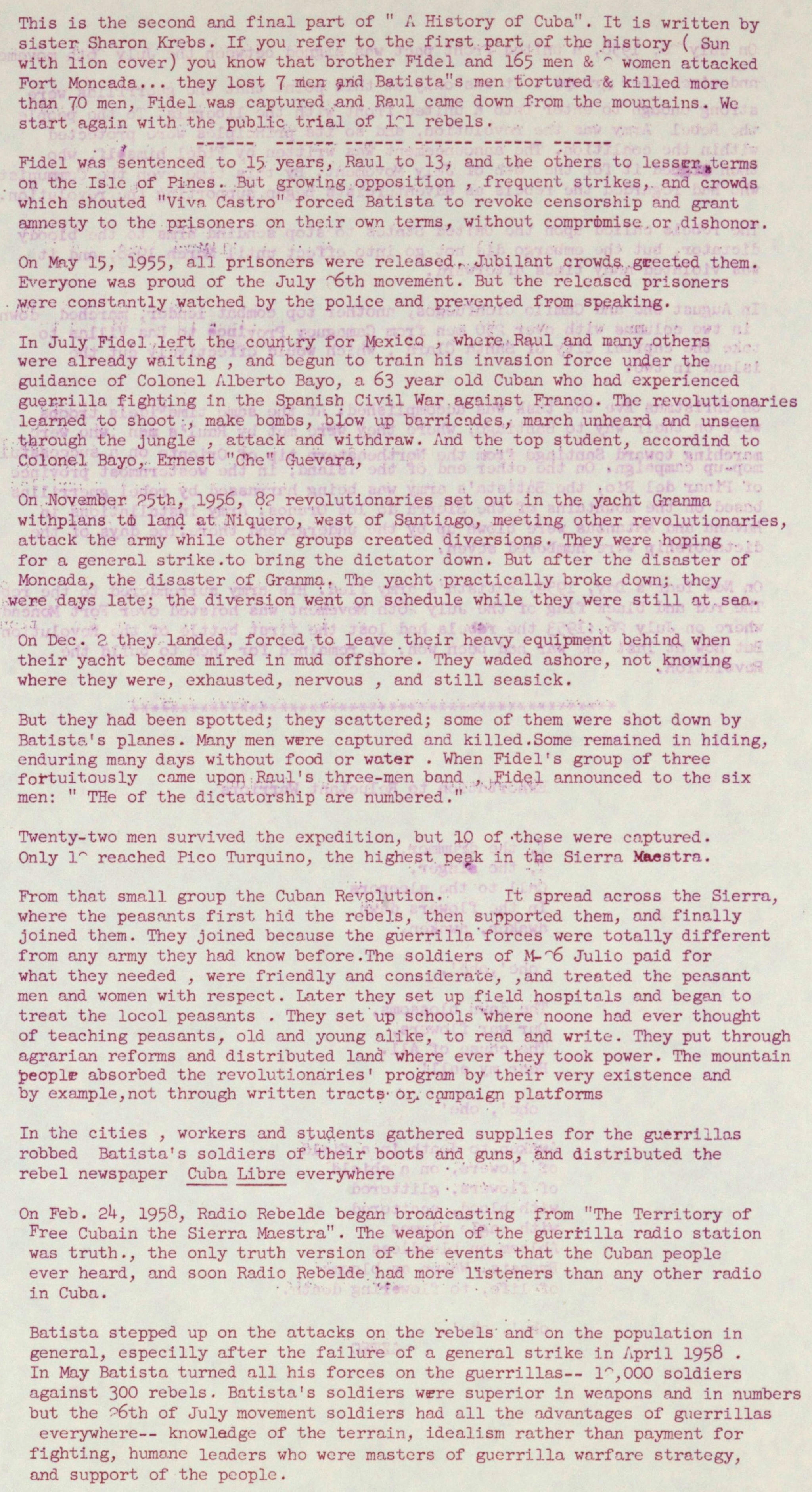 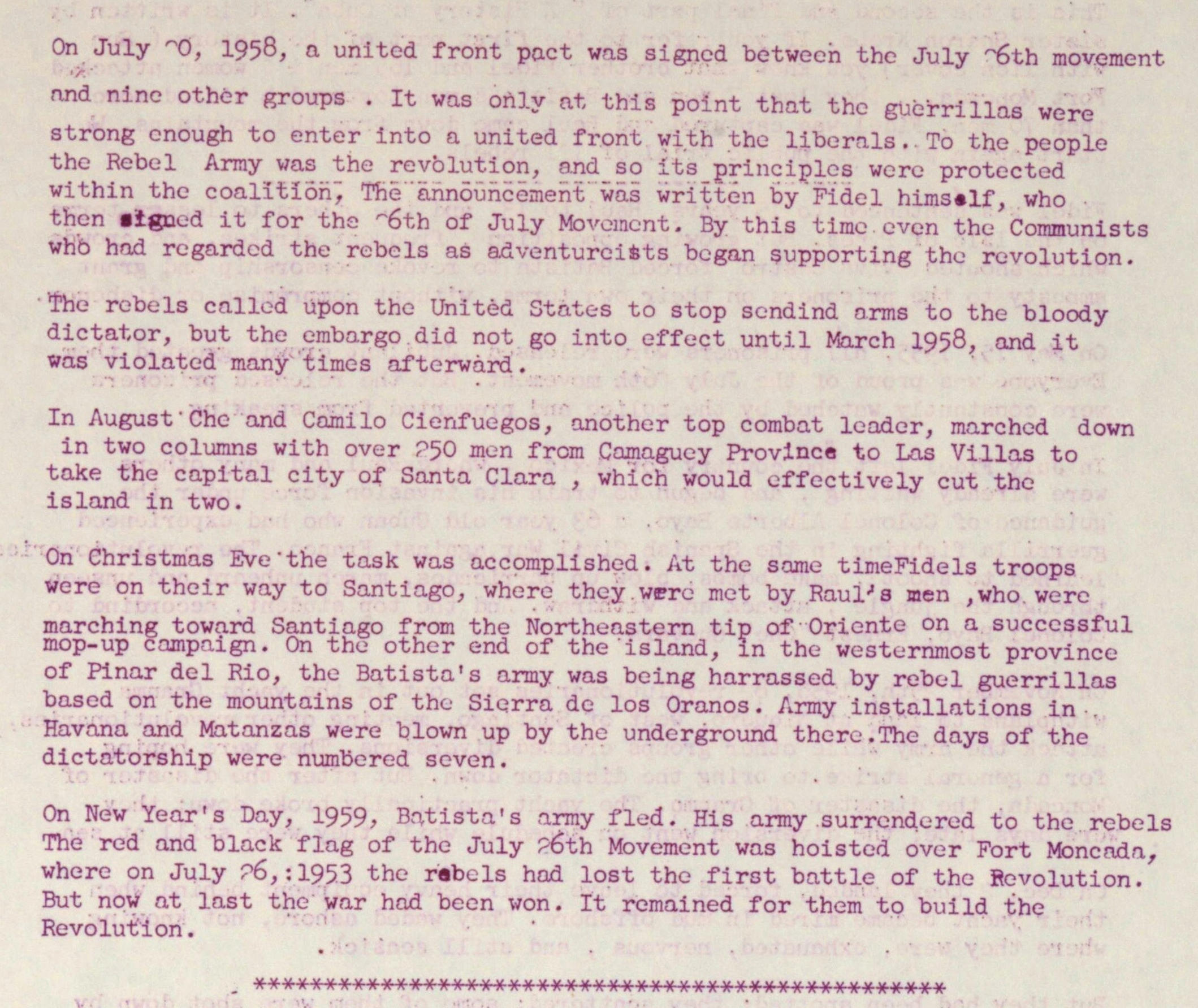 This is the second and final part of "A History of Cuba". It is written by sister Sharon Krebs . If you refer to the first part of the history (Sun with lion cover) you know that brother Fidel and 165 men & women attacked Fort Moncada... they lost 7 men and Batista's men tortured & killed more than 70 men, Fidel was captured and Raul came down from the mountains. We start again with the public trial of 101 rebels.

Fidel was sentenced to 15 years, Raul to 13, and the others to lesser terms on the Isle of Pines. But growing opposition, frequent strikes, and crowds which shouted "Viva Castro" forced Batista to revoke censorship and grant amnesty to the prisoners on their own terms, without compromise or dishonor.

On May 15, 1955, all prisoners were released. Jubilant crowds greeted them. Everyone was proud of the July 26th movement. But the released prisoners were constantly watched by the police and prevented from speaking.

In July Fidel left the country for Mexico, where Raul and many others were already waiting, and began to train his invasion force under the guidance of Colonel Alberto Bayo, a 63 year old Cuban who had experienced guerrilla fighting in the Spanish Civil War against Franco. The revolutionaries learned to shoot, make bombs, blow up barricades, march unheard and unseen through the jungle, attack and withdraw. And the top student, according to Colonel Bayo, Ernest "Che" Guevara.

On November 25th, 1956, 82 revolutionaries set out in the yacht Granma with plans to land at Niquero, west of Santiago, meeting other revolutionaries, attack the army while other groups created diversions. They were hoping for a general strike to bring the dictator down. But after the disaster of Moncada, the disaster of Granma. The yacht practically broke down; they were days late; the diversion went on schedule while they were still at sea.

On Dec. 2 they landed, forced to leave their heavy equipment behind when their yacht became mired in mud offshore. They waded ashore, not knowing where they were, exhausted, nervous, and still seasick.

But they had been spotted; they scattered; some of them were shot down by Batista's planes. Many men were captured and killed. Some remained in hiding, enduring many days without food or water. When Fidel's group of three fortuitously came upon Raul's three-men band, Fidel announced to the six men: " The of the dictatorship are numbered."

Twenty-two men survived the expedition, but 10 of these were captured. Only 10 reached Pico Turquino, the highest peak in the Sierra Maestra.

From that small group the Cuban Revolution. It spread across the Sierra, where the peasants first hid the rebels, then supported them, and finally joined them. They joined because the guerrilla forces were totally different from any army they had know before. The soldiers of M-26 Julio paid for what they needed, were friendly and considerate, and treated the peasant men and women with respect. Later they set up field hospitals and began to treat the local peasants. They set up schools where no one had ever thought of teaching peasants, old and young alike, to read and write. They put through agrarian reforms and distributed land where ever they took power. The mountain people absorbed the revolutionaries' program by their very existence and by example,not through written tracts or campaign platforms.

In the cities, workers and students gathered supplies for the guerrillas. Robbed Batista's soldiers of their boots and guns, and distributed the rebel newspaper Cuba Libre everywhere.

On Feb. 24, 1958, Radio Rebelde began broadcasting from "The Territory of Free Cubain the Sierra Maestra". The weapon of the guerrilla radio station was truth., the only truth version of the events that the Cuban people ever heard, and soon Radio Rebelde had more listeners than any other radio in Cuba.

Batista stepped up on the attacks on the rebels and on the population in general, especially after the failure of a general strike in April I958. In May Batista turned all his forces on the guerrillas - 10,000 soldiers against 300 rebels. Batista's soldiers were superior in weapons and in numbers but the 26th of July movement soldiers had all the advantages of guerrillas everywhere--knowledge of the terrain, idealism rather than payment for fighting, humane leaders who were masters of guerrilla warfare strategy, and support of the people.

On July 30, 1958, a united front pact was signed between the July 26th movement and nine other groups. It was only at this point that the guerrillas were strong enough to enter into a united front with the liberals. To the people the Rebel Amy was the revolution, and so its principles were protected within the coalition. The announcement was written by Fidel himself, who then signed it for the 26th of July Movement. By this time even the Communists who had regarded the rebels as adventurists began supporting the revolution.

The rebels called upon the United States to stop sending arms to the bloody dictator, but the embargo did not go into effect until March 1958, and it was violated many times afterward.

In August Che and Camilo Cienfuegos, another top combat leader, marched down in two columns with over 250 men from Camaguey Province to Las Villas to take the capital city of Santa Clara, which would effectively cut the island in two.

On Christmas Eve the task was accomplished . At the same time Fidel's troops were on their way to Santiago, where they were met by Raul's men, who were marching toward Santiago from the Northeastern tip of Oriente on a successful mop-up campaign. On the other end of the island, in the westernmost province of Pinar del Rio, the Batista's army was being harassed by rebel guerrillas based on the mountains of the Sierra de los Óranos. Army installations in Havana and Matanzas were blown up by the underground there. The days of the dictatorship were numbered seven.

On New Year's Day, 1959, Batista's army fled. His army surrendered to the rebels The red and black flag of the July 26th Movement was hoisted over Fort Moncada, where on July 26, 1953 the rebels had lost the first battle of the Revolution. But now at last the war had been won. It remained for them to build the Revolution.