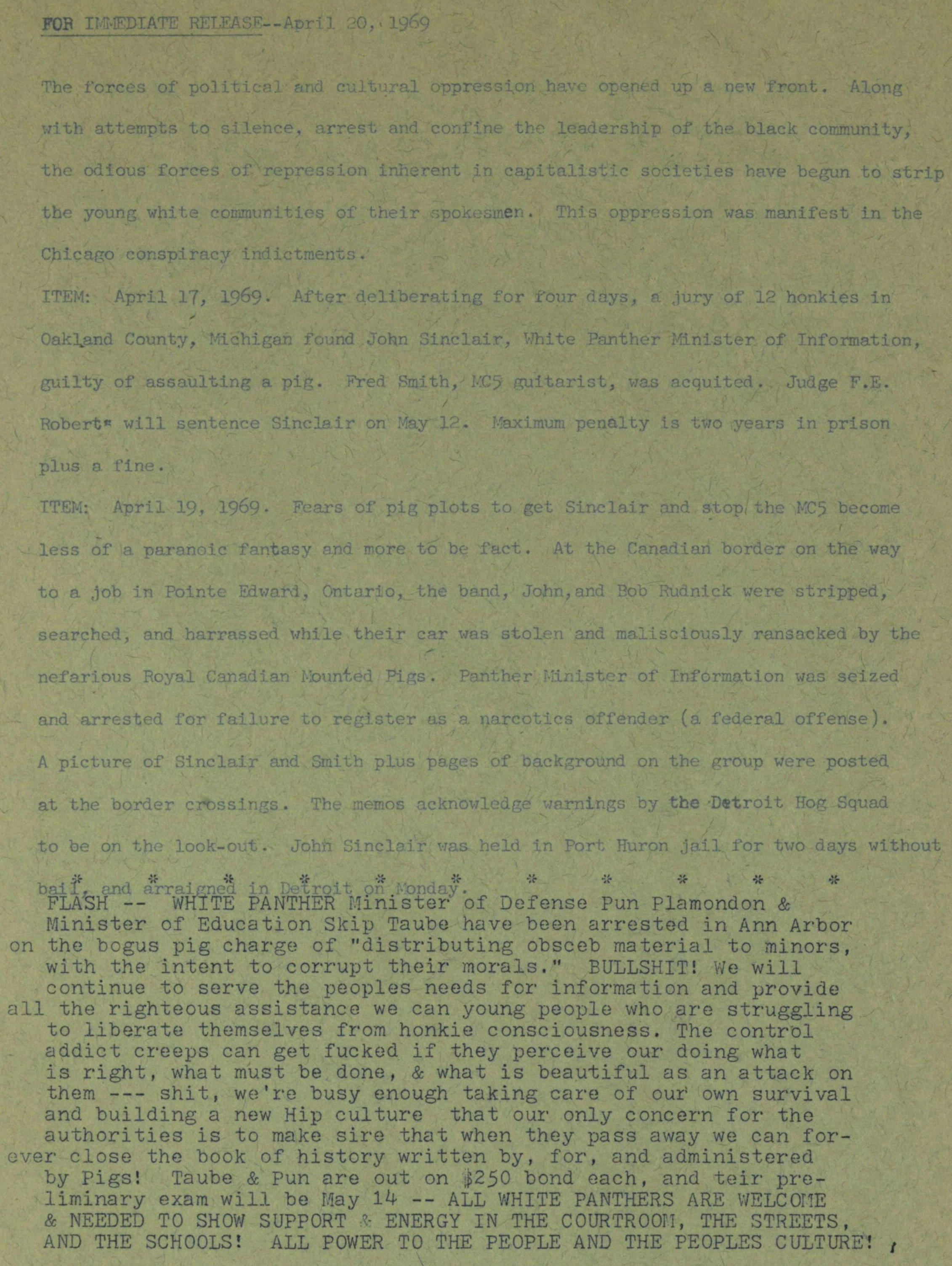 The forces of political and cultural oppression have opened up a new front.  Along with attempts to silence, arrest and confine the leadership of the black community, the odious forces of repression inherent in capitalistic societies have begun to strip the young white communities of their spokesmen.  This oppression was manifest in the Chicago conspiracy indictments.

ITEM:  April 17, 1969.  After deliberating for four days, a jury of 12 honkies in Oakland County, Michigan found John Sinclair, White Panther Minister of Information guilty of assaulting a pig.  Fred Smith, MC5 guitarist, was acquitted.  Judge F.E. Robert will sentence Sinclair on May 12.  Maximum penalty is two years in prison plus a fine.

ITEM:  April 19,1969.  Fears of pig plots to get Sinclair and stop the MC5 become less of a paranoic fantasy and more to be fact.  At the Canadian border on the way to a job in Pointe Edward, Ontario, the band, John, and Bob Rudnick were stripped, searched and harrassed while their car was stolen and maliciously ransacked by the nefarious Royal Canadian Mounted Pigs.  Panther Minister of Information was seized and arrested for failure to register as a narcotics offender (a federal offense).  A picture of Sinclair and Smith plus pages of background on the group were posted at the border crossings.  The memos acknowledge warnings by the Detroit Hog Squad to be on the look-out.  John Sinclair was held in Port Huron jail for two days without bail, and arraigned in Detroit on Monday.

FLASH -- WHITE PANTHER Minister of Defense Pun Plamondon & Minister of Education Skip Taube have been arrested in Ann Arbor on the bogus pig charge of "distributing obscene material to minors, with the intent to corrupt their morals." BULLSHIT! We will continue to serve the peoples needs for information and provide all the righteous assistance we can young people who are struggling to liberate themselves from honkie consciousness. The control addict creeps can get fucked if they perceive our doing what is right, what must be done, & what is beautiful as an attack on them---shit, we 're busy enough taking care of our own survival and building a new Hip culture that our only concern for the authorities is to make sure that when they pass away we can forever close the book of history written by, for, and administered by Pigs! Taube & Pun are out on $250 bond each, and their preliminary exam will be May 14-- ALL WHITE PANTHERS ARE WELCOME & NEEDED TO SHOW SUPPORT & ENERGY IN THE COURTROOM, THE STREETS, AND THE SCHOOLS! ALL POWER TO THE PEOPLE AND THE PEOPLES CULTURE!