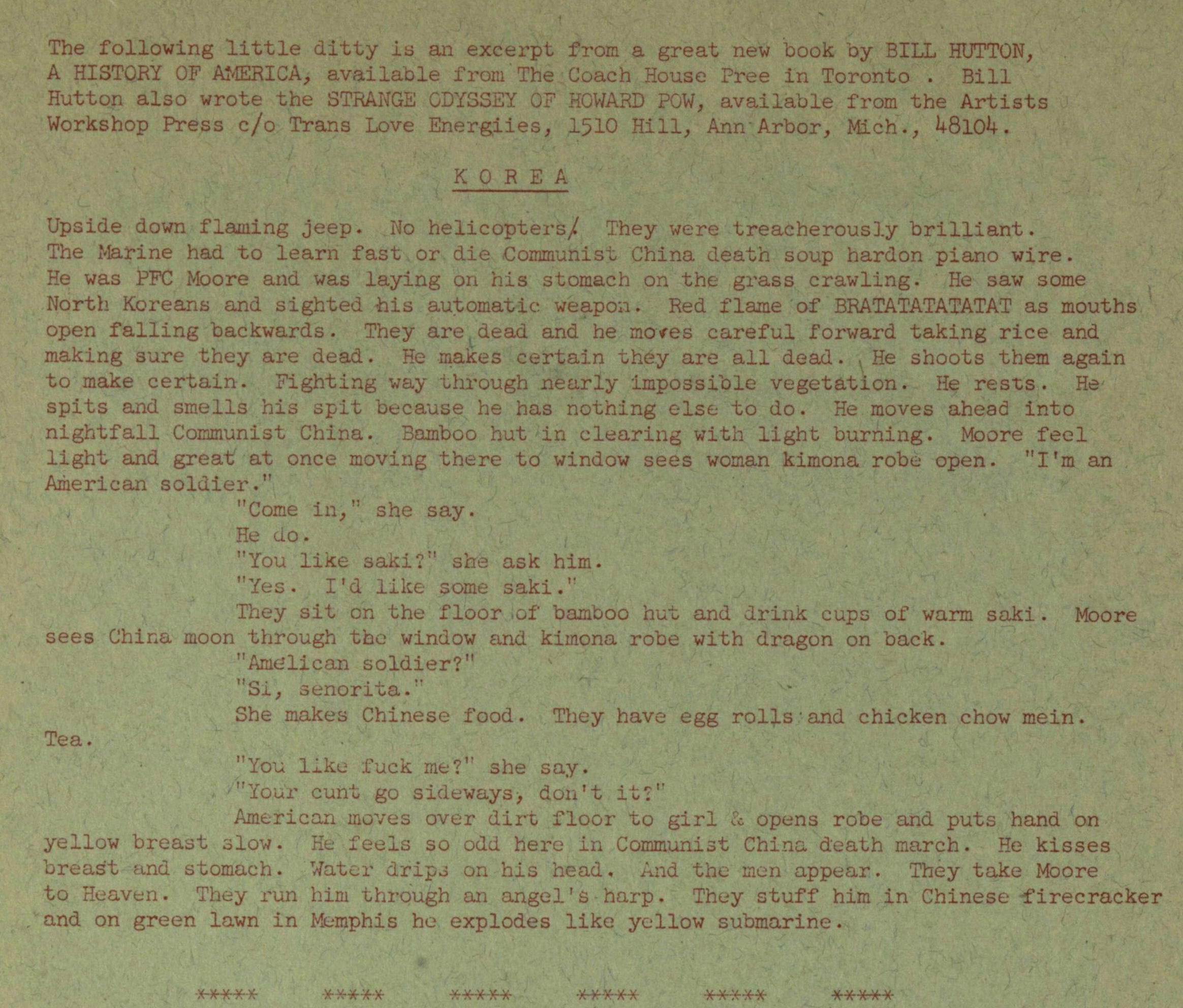 The following little ditty ia an excerpt from a great new book by BILL HUTTON, A HISTORY OF AMERICA, available from The Coach House Pree in Toronto . Bill Hutton also wrote the STRANGE CDYSSEY OF HGWARD POW, available from the Artists Workshop Press co Trans Love Energiies, 1510 Hill, AnnArbor, Mich., U81O4 . Upside down flaming jeep. Ho helicopters Th e y were treacherously brilliant. The Marine had to learn f ast or die Communist China death soup hardon piano wire. He was PFC Moore and was laying on nis stomach on the grass crawling. He saw some North Koreans and sighted his automatie weapon. Red f lame of BRATATATATATAT as mouths open falling backwards . They are t dead and he moves careful forward taking rice and making sure they are dead . He makes certain they are all dead . ■, He shoots them again to make certain. Fighting way through nearly impossible vegetation. He rests . He spits and smells his spit because he has nothing else to do. He moves ahead into nightfall Communist China. Bamboo hut in clearing with light burning. Moore feel light and great at once moving there to window sees woman kimona robe open. "I'm an American soldier." "Come in," she say. He do. "You like saki?;' she ask him. 11 Yes. I'd like some saki.1' ley sit on the f loor of bamboo hut and drink cups of warm saki . Moore sees China moon through the window and kimona robe with dragon on back. "Amcilican soldier?" "Si, señorita."' She makes Chinese f ood . They have egg rolls and chicken chow mein . Tea. "You like fuck mè?" she say. "You'r cunt go sideways don't it;1' American moves over dirt floor to girl Cc opens robe and puts hand on yellow breast slow. Is so odd herc in Communist China death march. He kisses breast and stomach. Water dripj on his head. And the men appear. They take Moore to Heaven. They run him through an angel' s harp . They stuff him in Chinese firecracker and on green lawn in Memphis he explodes like yellow submarine .