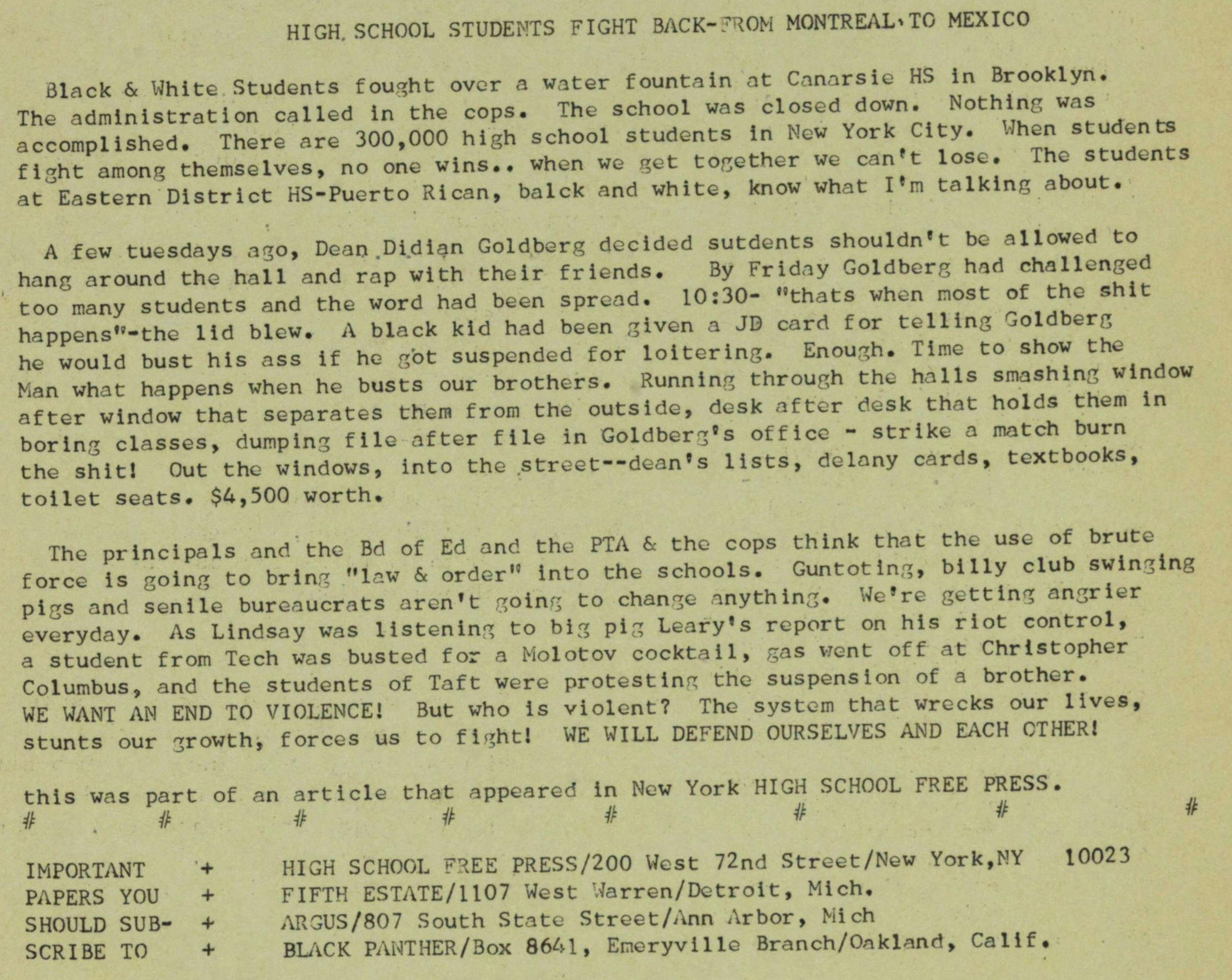 Black & White Students fought over a water fountain at Canarsie HS in Brooklyn. The administraron called in the cops. The school wa. cl " " oth W" ' accomplished. There are 300,000 high school students in New York City. When "fan fight among themselves, no one win... when we get together we can t lose. The students at Eastern District HS-Puerto Rican, balck and white, know what Im talking about. A few tuesdays ago, Dean Didian Goldberg decided sutdents shouldn't be allowed to hanr around the hall and rap with their friends. By Friday Goldberg had hallenged toomany students and the word had been spread. "thats when nost of the shit happens"-thc lid blew. A black kid had been givwi a JD card for telling Goldberg he would bust his ass if he gbt suspended for loitering. Enough. Time to show the Kan what happens when he busts our brothers. Running through the halls Whi after window that separates theni from the outside, desk after desk that holds them in classes, dumping file after file in Goldberg's office - strike a match burn the shit! Out the Windows, into the stroet-dean's lists, delany cards, textbooks, toilet seats. $4,500 worth. The principáis and the Bd of Ed and the PTA & the cops think that the uso of hutC f orce is goinr to bring "íav & order" into the schools. Guntoting, billy club swinging pis and senile bureaucrats aren't going to change anything. We're getting angr er everyday. As Lindsay was listening to big plg Leary's report on his rlot control, a student from Tech was busted for a Molotov cocktail, ,as went off at Christopher Columbus, and the students of Taft were protest in the suspension of a brother. WE WANT AN END TO VIOLENCE! But who is violent? The system that wrecks our lives, stunts our growth, forces us to fight! WE WILL DEFEND OURSELVES AND EACH CTHER! this was part of an art iele that appeared in New York HIGH SCHOOL FREE PRESS. # # # # # # IMPORTANT + HIGH SCHOOL PREE PRESS200 West 72nd StreetNew York.NY 10023 PAPERS YOU + FIFTH ESTATE1107 West '.farrenDetroit , Mich. SHOULD SUB+ ARGUS807 South State StreetAnn Arbor, Mich SCRIBE TO + BLACK PAHTHERBox 8641, Eneryvllle BranchOnklnd, Calif.