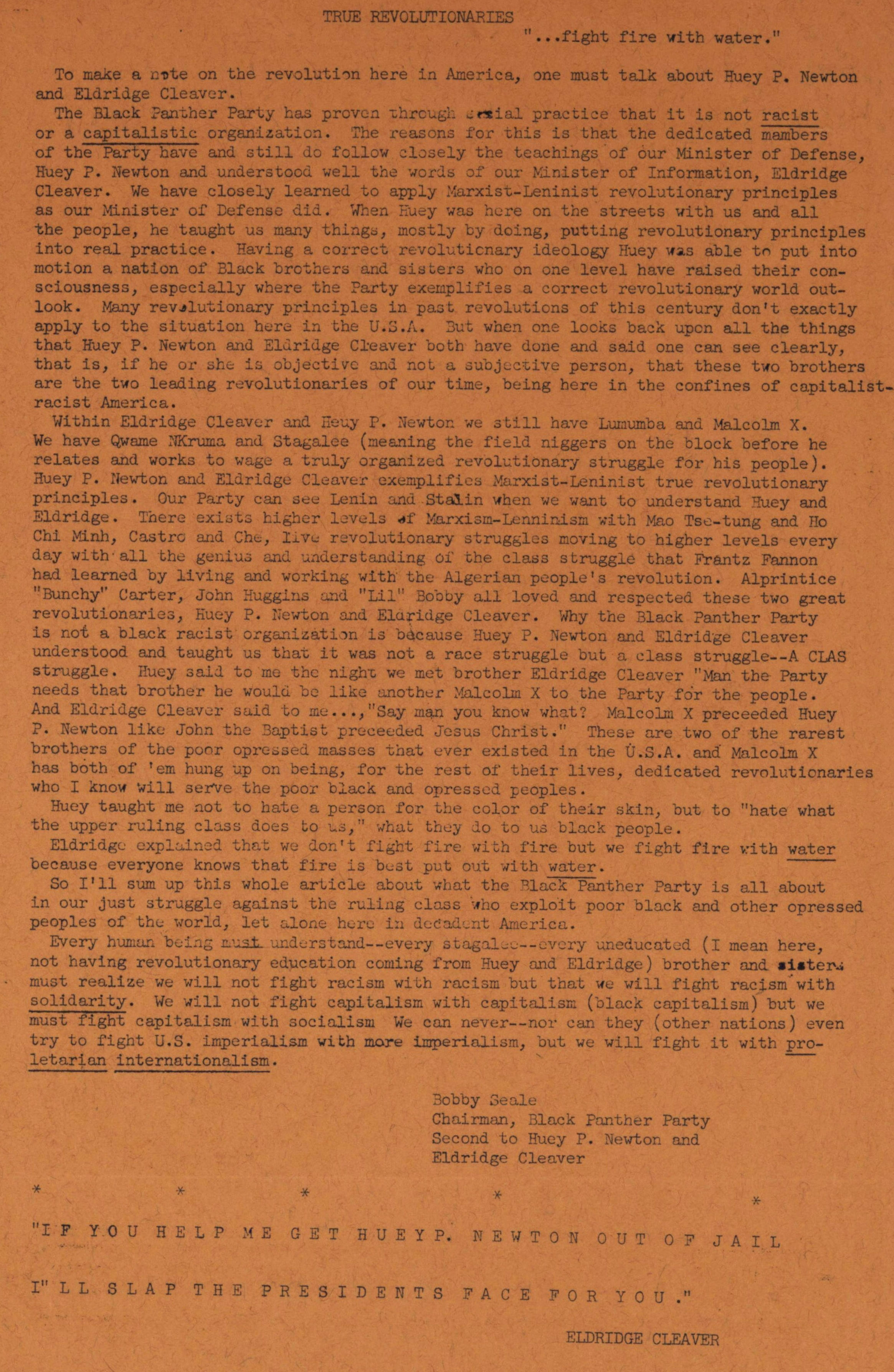 "...fight fíre with water." To make a ñute on the revolutiin here in America, one must talk about Huey P. Newton and Eldridge Cleaver. The Black Panthsr Party has proven ihrough lial practica that it is not racist or a capitalistic organizaticn. The i-easons for this is that the dedicated mambers of the Party have and still do follow closely the teachings of our Minister of Defense, Huey P. Newton and understood well the wordt; of our Minister of Information, Eldridge Cleaver. We have closely learned to apply Marxist-Leninist revolutionary principies as our Minister of Defense dia. When Huey was hure on the streets with us and all the people, he taught us many thingd, mostly by doing, putting revolutionary principies into real practice. ïïaving a correct revoluticnary ideology Huey was able tn put into motion a nation of Black brcthers and siaters who on one level have raised their consciousness, especially where the Farty exenrplifies a correct revolutionary world outlook. Many revjlutionary principies in past revolutions of this century don 't exactly apply to the situation here in the U.3.A. 3ut when one locks back upen all the things that Huey P. Newton and Eldridge Cleaver both have done and said one can see clearly, that is, if he or ób ia objectivc and not a oubjeive person, that these two brothers are the two leading revolutionaries of our time, being here in the confines of capitalistracist America. Within Eldridge Cleaver and Ileuy P. Newton we stlll havo Luiaumba and Malcolm X. We have Qwame NKruma and Stagalee (aeaning the field niggers on the block before he relates and works to wage a truly organized revolutionary struggle for his people). Huey P. Newton and Eldridge Cleaver exemplifiea Leninist true revolutionary principies. Our Party can seu Lenin and Stalin fhen we want to understand Huey and Eldridge. There exiöts higher levds f Marxisin-Lenninism with Mao Tse-tung and Ho Chi Minh, Castre and Cht, lifè rsvolutionary struggles moving to higher levéis every day all the genius and unders tanding of the daas struggie that Frantz Fannon had learned by living and working with' the Algerian people 's revolution. Alprintice "Bunchy1' Carter, John Huggins caid "Lil" Bobby all loved and respected these two great revolutionaries, Kuey P. Newton and Eluridge Cleaver. Why the Black Panther Party is not a black racist organizati-n is bijcause Huey P. Newton and Eldridge Cleaver understood and taught us that it was not a race struggle but a class struggle A CLAS struggle. Huey said to me the nighx we met brother Eldridge Cleaver "Man the Party needs that brother he would be like another Malcolin X to the Party for the people. And Eldridge Cleaver said to me...,"Say man you know whot? Malcolm X preceeded Huey ?. Newton like John the 3aptist preceeded Jesus Christ." These are two of the rarest brothers of the poor opresed masses that ever existed in the Ú.S.A. and Malcolm X has both of 'em hung up on being, for the rest of their lives, dedicated revolutionaries who I know will serve the poor black and opressed peoples . Huey taught me not to hate a person for the color of their skin, but to "hate what the upper ruling class does to us' what thuy do to us black people. Eldridge explcdnod that we dor. 't fight fire with fire but we fight fire vith water because everyone knows that fire is bust put out with water. So I'll sum up this whole article about what the lack Panther Party is all about in our just atruggle against the ruling class 'vrho exploit poor black and other opressed peoples of the vorld, let alone heru i:i dutfad'.nt America. Every hunion boins cusi. --u:d-r3tand - every stagal_u--,jvory uneducatjd (i mean here, not having revolutionary education coming f rom Huey and Eldridge) brother and itei must realize we will not fight racism with racism but that we will fight racism'with solidarity. We will not fight capitalism with capitalism (black capitalism) but we must fight capitalism with socialism We can never - nor can they (other nations) even try to fight U.S. imperialism wifch more imperialism, but we will fight it with proletarian internationalism . 3obby 3e ale Chairman, Black Panther Party Second to Huey P. Newton and Eldridge Cleaver "IF YOU HELP ME GET HUEYP. NEWTON OUT 0? JAIL I"LL SLAP THE PRESIDE NTS FACE FOR YOU."