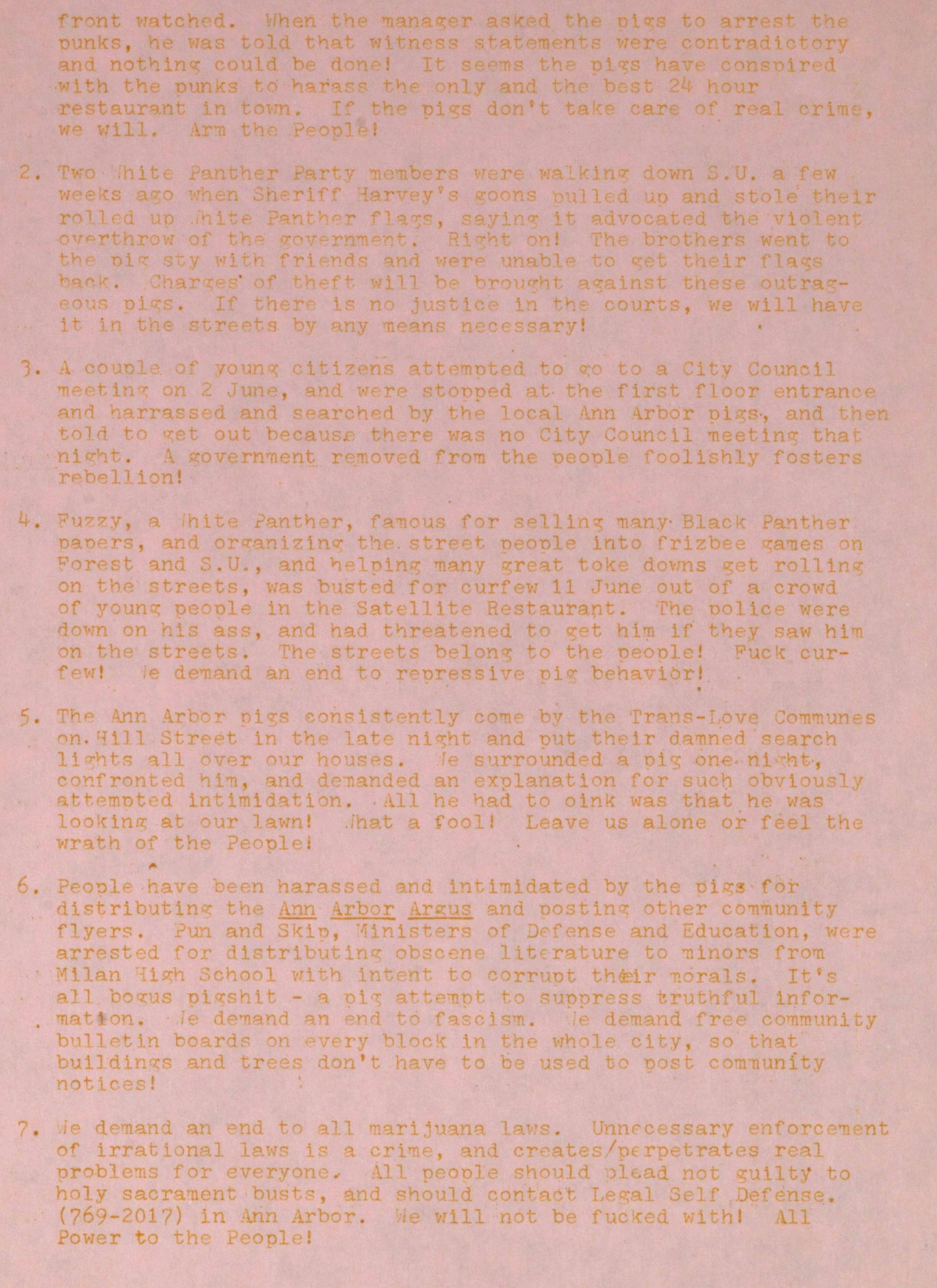 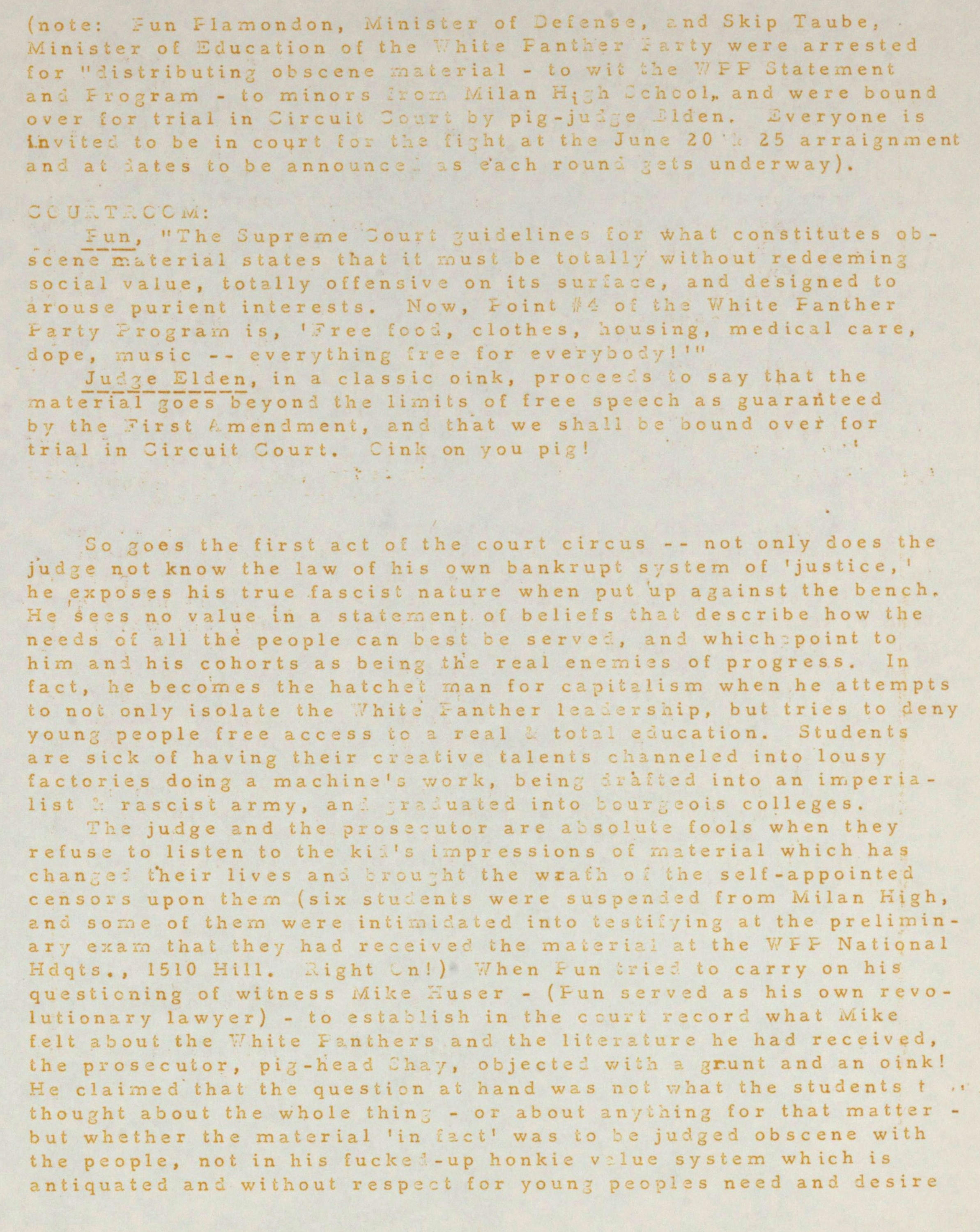 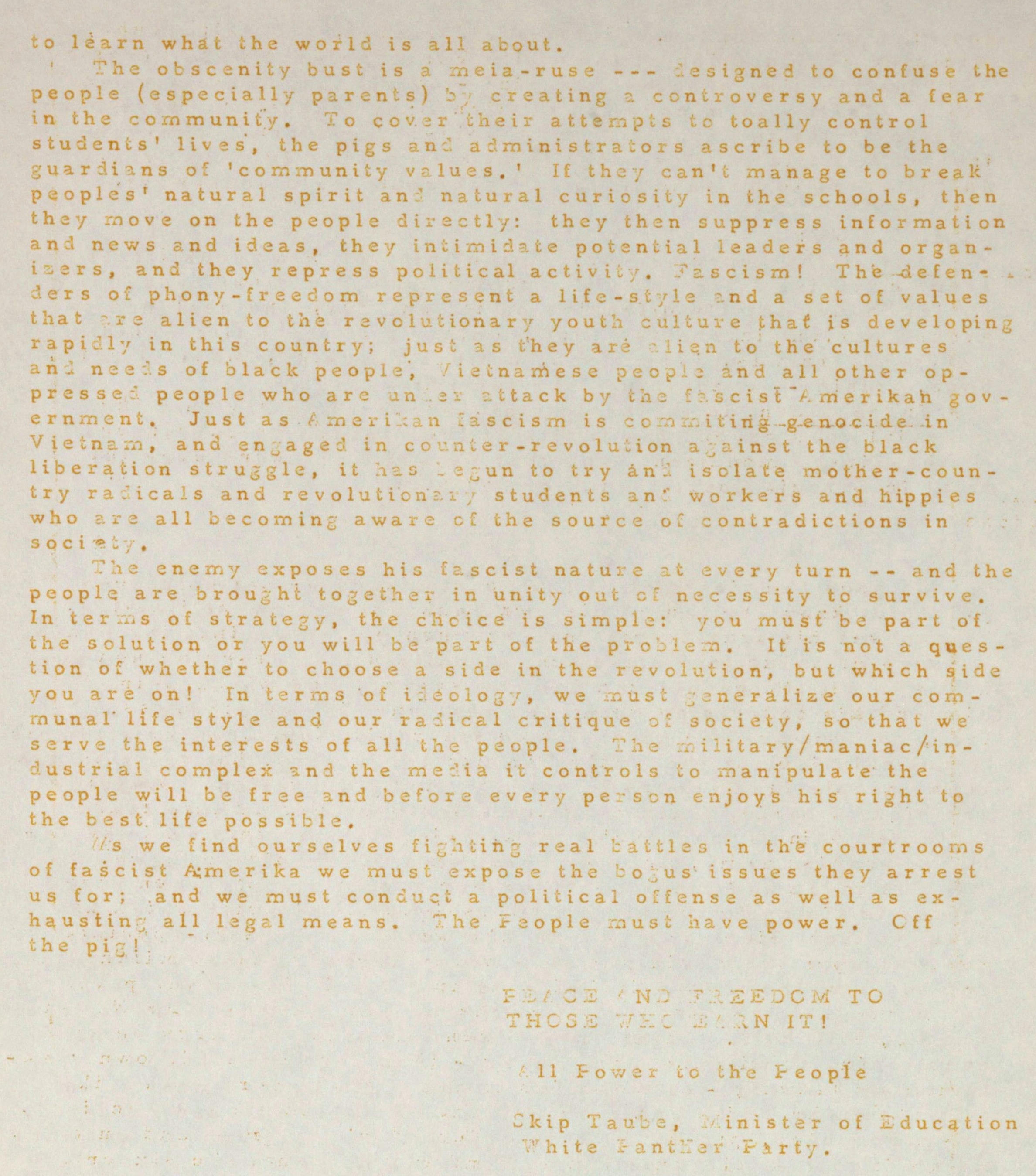 1. The Whistle Stop Restaurant on S.U. and Forest was ransacked ($300 damages) and two of our black friends spat on by two punk fraternity (sic) boys on 11 June, while policemen in a car out front watched. When the manager asked the pigs to arrest the punks, he was told that witness statements were contradictory and nothing could be done! It seem the pigs have conspired with the punks to harass the only and best 24 hour restaurant in town. If the pigs don't take care of real crime, we will. Arm the people!

2. Two White Panther Party members were walking down S.U. a few weeks ago when Sheriff Harvey's goons pulled up and stole their rolled up White Panther flags, saying it advocated the violent overthrow of the government. Right on! The brothers went to the pig sty with friends and were unable to get their flags back. Charges of theft will be brought against these outrageous pigs. If there is no justice in the courts, we will have it in the streets by any means necessary!

3. A couple of young citizens attempted to go to a City Council meeting on 2 June, and were stopped at the first floor entrance and harassed and searched by the local Ann Arbor pigs, and then told to get out of there because there was no City Council meeting that night. A government removed from the people foolishly fosters rebellion!

4. Fuzzy, a White Panther, famous for selling many Black Panther papers, and organizing the street people into frisbee games on Forest and S.U., and helping many great toke downs get rolling on the streets, was busted for curfew 11 June out of a crowd of young people in the Satellite Restaurant. The police were down on his ass, and had threatened to get him if they saw him on the streets. The streets belong to the people! Fuck curfew! We demand an end repressive pig behavior!

5. The Ann Arbor pigs consistently come by the Trans-Love Communes on Hill Street in the late night and put their damned search lights all over our houses. We surrounded a pig on night, confronted him, and demanded an explanation for such obviously attempted intimidation. All he  had to oink was that he was looking at our lawn! What a fool! Leave us alone or feel the wrath of the people!

6. People have been harassed and intimidated by the pigs for distributing the Ann Arbor Argus and posting other community flyers. Pun and Skip, Ministers of Defense and Education, were arrested for distributing obscene literature to minors from Milan High School with the intent to corrupt their morals. It's all bogus pigs shit - a pig attempt to suppress truthful information. We demand an end to racism. We demand free community bulletin boards on every block in the whole city, so that buildings and trees don't have to be used to post community notices!

7. We demand an end to all marijuana laws. Unnecessary enforcement of irrational laws is a crime, and creates/perpetuates real problems for everyone. All people should plead not guilty to holy sacrament busts, and should contact Legal Self Defense. (769-2017) in Ann Arbor. We will not be fucked with! All Power to the People!

(note: Pun Plamondon, Minister of Defense, and Skip Taube, Minister of Education of the White Panther Party were arrested for "distributing obscene material - to wit the WPP Statement and Program - to minors from Milan High School, and were bound over for trial in Circuit Court by pig-judge Elden. Everyone is invited to be at court for the fight at the June 20 to 25 arraignment and at dates to be announced as each round gets underway).

Pun, "The Supreme Court guidelines for what constitutes obscene material states that it must be totally without redeeming social value, totally offensive on its surface, and designed to arouse purient interests. Now, Point #4 of White Panther Party Program is 'Free food, clothes, housing, medical care, dope, music - everything free for every bond! ' "

Judge Elden, in a classic oink, proceeds to say that the material goes beyond the limits of free speech as guaranteed by the First Amendment, and that we shall be bound over for trial in Circuit Court. Oink on you pig!

So goes the first act of the court circus - not only does the judge not know the law of his own bankrupt system of ' justice,' he exposes his true fascist nature when put up against the bench. He sees no value in a statement of beliefs that describe how the needs of all  the people can best be served, and which point to him and his cohorts as being the real enemies of progress. In fact, he becomes the hatchet man for capitalism when he attempts to not only isolate the White Panther leadership, but tries to deny young people free access to a real & total education. Students are sick of having their creative talents channeled into lousy factories doing a machine's work, being drafted into an imperialist & rascist army, and graduated into bourgeois colleges.

The judge and the prosecutor are absolute fools when they refuse to listen to the kid's impressions of the material which has changed their lives and brought the wrath of the self-appointed censors upon them (six students were suspended from Milan high, some of them were intimidated into testifying at the preliminary exam that they had received the material at the WPP National Hdqts., , 1510 Hill. Right On!) When Pun tried to carry on his questioning of witness Mike Huser - (Pun served as his own revolutionary lawyer) - to establish in the court record what Mike felt about the White Panthers and the literature he had received, the prosecutor, pig-headed Shay, objected with a grunt and an oink! He claimed that the question at hand was not about what the students thought about the whole thing - or about anything for that matter - but whether the material 'in fact' was to be judged obscene with the people, not in his fucked-up honkie value system which is antiquated and without respect for young peoples need and desire to learn what the world is about.

The obscenity bust is a meia-ruse - designed to confuse the people (especially parents) by creating a controversy and a fear in the community. To cover their attempts to totally control students' lives, the pigs and administrators ascribe to be the guardians of 'community values.' If they can't manage to break peoples' natural spirit and natural curiosity in the schools, then they move on the people directly: they then suppress information and news and ideas, they intimidate potential leaders and organizers, and they repress political activity. Fascism! The defenders of phony-freedom represent a life-style and a set of values that are alien to the revolutionary youth culture that is developing rapidly in this country; just at they are to the cultures and needs of black people, Vietnamese people and all other oppressed people who are under attack by the fascist Amerikah government, Just as American fascism is commiting genocide in Vietnam, and engaged in counter-revolution against the black liberation struggle, it has begun to try and isolate mother-country radicals and revolutionary students and workers and hippies who are all becoming aware of the source of contradictions in society.

The enemy exposes his fascist nature at every turn - and the people are brought together in unity out of necessity to survive. In terms of strategy, the choice is simple: you must be part of the solution or you will be part of the problem. It is not a question of whether to choose a side in the revolution, but which side you are on! In terms of ideology, we must generalize our communal life style and our radical critique of society, so that we serve the interests of all people. The military/maniac/industrial complex and the media it controls to manipulate the people will be free and before every person enjoys his right to the best life possible.

As we find ourselves fighting real battles in the courtrooms of fascist Amerika we must expose the bogus issues they arrest us for; and we must conduct a political offensive as well as exhausting all legal means. The People must have power. Off the pig!

PEACE AND FREEDOM TO THOSE WHO EARN IT!