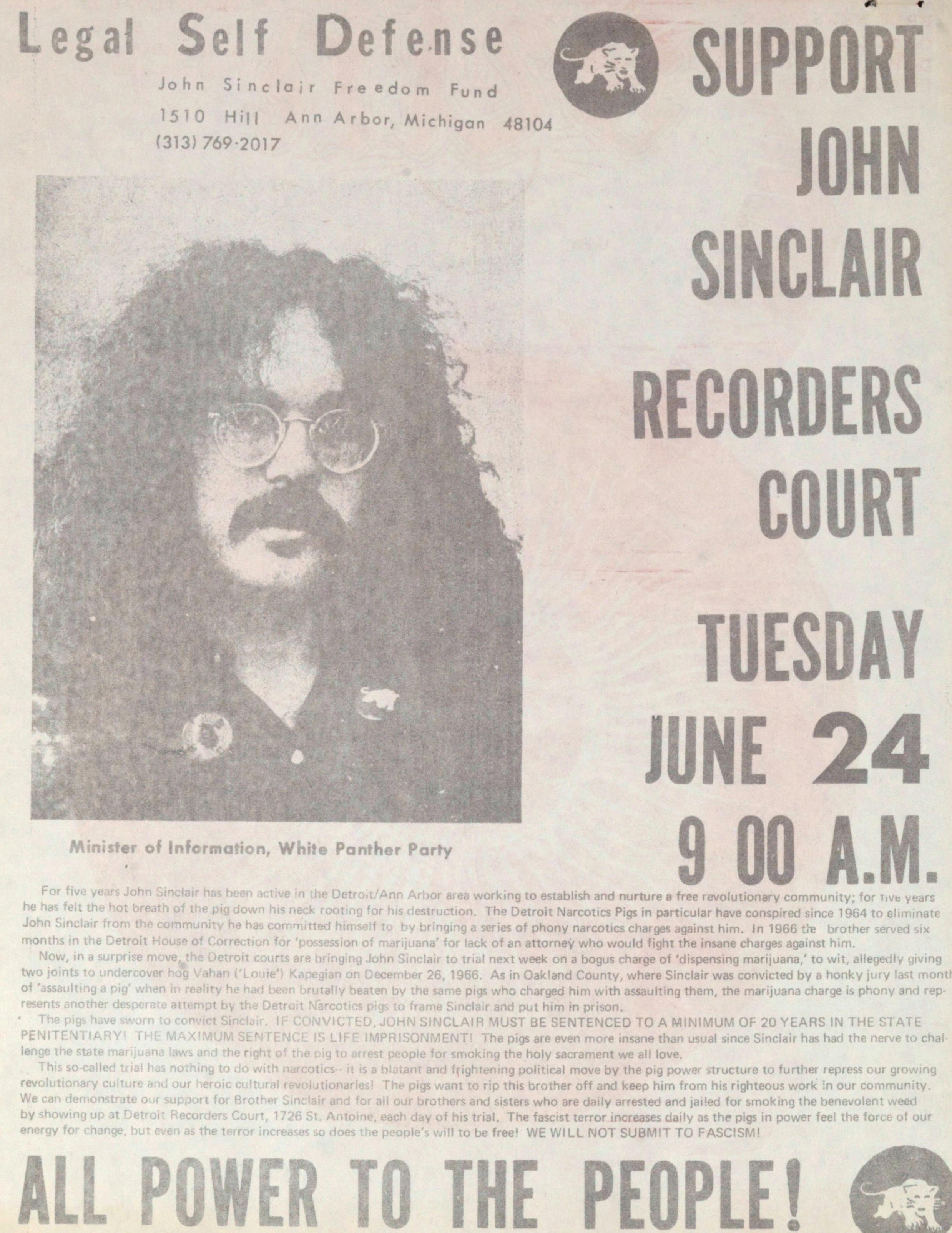 For five years John Sinclair has been active in the Detroit/Ann Arbor area working to establish and nurture a free revolutionary community; for five years he has felt the hot breath of the pig down his neck rooting for his destruction.The Detroit Narcotics Pigs in particular have conspired since 1964 to eliminate John Sinclair he has committed himself to by bringing a series of phony narcotics charges against him. In 1966 the brother servetd six months in the Detroit House of Correction 'for possession of marijuana' for lack of an attorney who would fight the insane charges against him.

Now, in a surprise move, the Detroit Courts are bringing John Sinclair to trial next week on a bogus charge of 'dispensing marijuana,' to wit, allegedly giving two joints to undercover hog Vahan ('Louie') Kapegian on December 26, 1966. As in Oakland County, where Sinclair was convicted by a honky jury last month of 'assaulting a pig' when in reality he had been brutally beaten by the same pigs who charged him with assaulting them, the marijuana charge is phony and represents another desperate attempt by the Detroit Narcotics pigs to frame Sinclair and put him in prison.

The pigs have sworn to convict Sinclair. IF CONVICTED, JOHN SINCLAIR MUST BE SENTENCED TO A MINIMUM OF 20 YEARS IN THE STATE PENITENTIARY! THE MAXIMUM SENTENCE IS LIFE IMPRISONMENT! The pigs are even more insane than usual since Sinclair has had the nerve to challenge the state marijuana laws and the right of the pig to arrest people for smoking the holy sacrament we all love.

This so called trial has nothing to do with narcotics - it is a blatant and frightening political move by the pig power structure to further repress our growing revolutionary culture and our heroic cultural revolutionaries! The pigs want to rip this brother off and keep him from his righteous work in our community. We can demonstrate our support for Brother Sinclair and for all our brothers and sisters who are daily arrested and jailed for smoking the benevolent weed by showing up at Detroit Recorders Court, 1726 St. Antoine, each day of his trial. The fascist terror increases daily as the pigs in power feel the force of our energy for change, but even as the terror increases so does the people's will to be free! WE WILL NOT SUBMIT TO FASCISM!