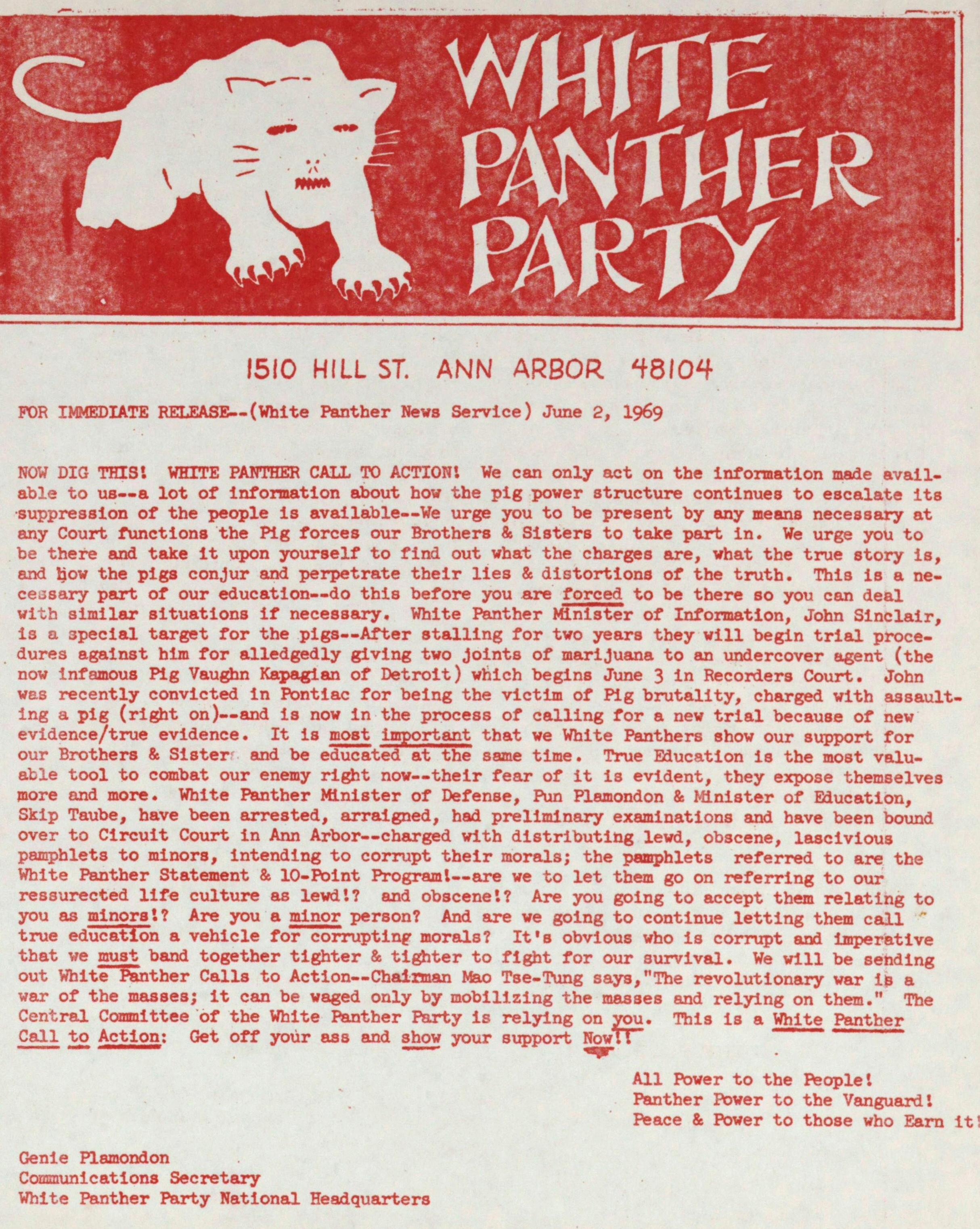 NOW DIG THIS! WHITE PANTHER CALL TO ACTION! We can only act on the information made available to us - a lot of Information about how the pig power structure continues to escalate its suppression of the people is available - We urge you to be present by any means necessary at any Court functions the Pig forces our Brothers & Sisters to take part in. We urge you to be there and take it upon yourself to find out what the charges are, what the true story is, and how the pigs conjur and perpetrate their lies & distortions of the truth. This is a necessary part of our education - do this before you are forced to be there so you can deal with similar situations if necessary. White Panther Minister of Information, John Sinclair, is a special target for the pigs - After stalling for two years they will begin trial procedures against him for alledgedly giving two joints of marijuana to an undercover agent (the now infamous Pig Vaughn Kapagian of Detroit) which begins June 3 in Recorders Court. John was recently convicted in Pontiac for being the victim of Pig brutality, charged with assaulting a pig (right on) - and is now in the process of calling for a new trial because of new evidence/true evidence. It is most important that we White Panthers show our support for our Brothers & Sister and be educated at the same time. True Education is the most valuable tool to combat our enemy right now - their fear of it is evident, they expose themselves more and more. White Panther Minister of Defense, Pun Plamondon & Minister of Education, Skip Taube, have been arrested, arraigned, had preliminary examinations and have been bound over to Circuit Court in Ann Arbor - charged with distributing lewd, obscene, lascivious pamphlets to minors, intending to corrupt their morals; the pamphlets referred to are the White Panther Statement & 10-Point Program! - are we to let them go on referring to our ressurected life culture as lewd!? and obscene!? Are you going to accept them relating to you as minors!? Are you a minor person? And are we going to continue letting them call true education a vehicle for corrupting morals? It's obvious who is corrupt and imperative that we must band together tighter & tighter to fight for our survival. We will be sending out White Panther Calls to Action - Chairman Mao Tse-Tung says,"The revolutionary war is a war of the masses; it can be waged only by mobilizing the masses and relying on them." The Central Committee of the White Panther Party is relying on you. This is a White Panther Cali to Action: Get off your ass and show your support Now!!

Panther Power to the Vanguard!

Peace & Power to those who Earn it!