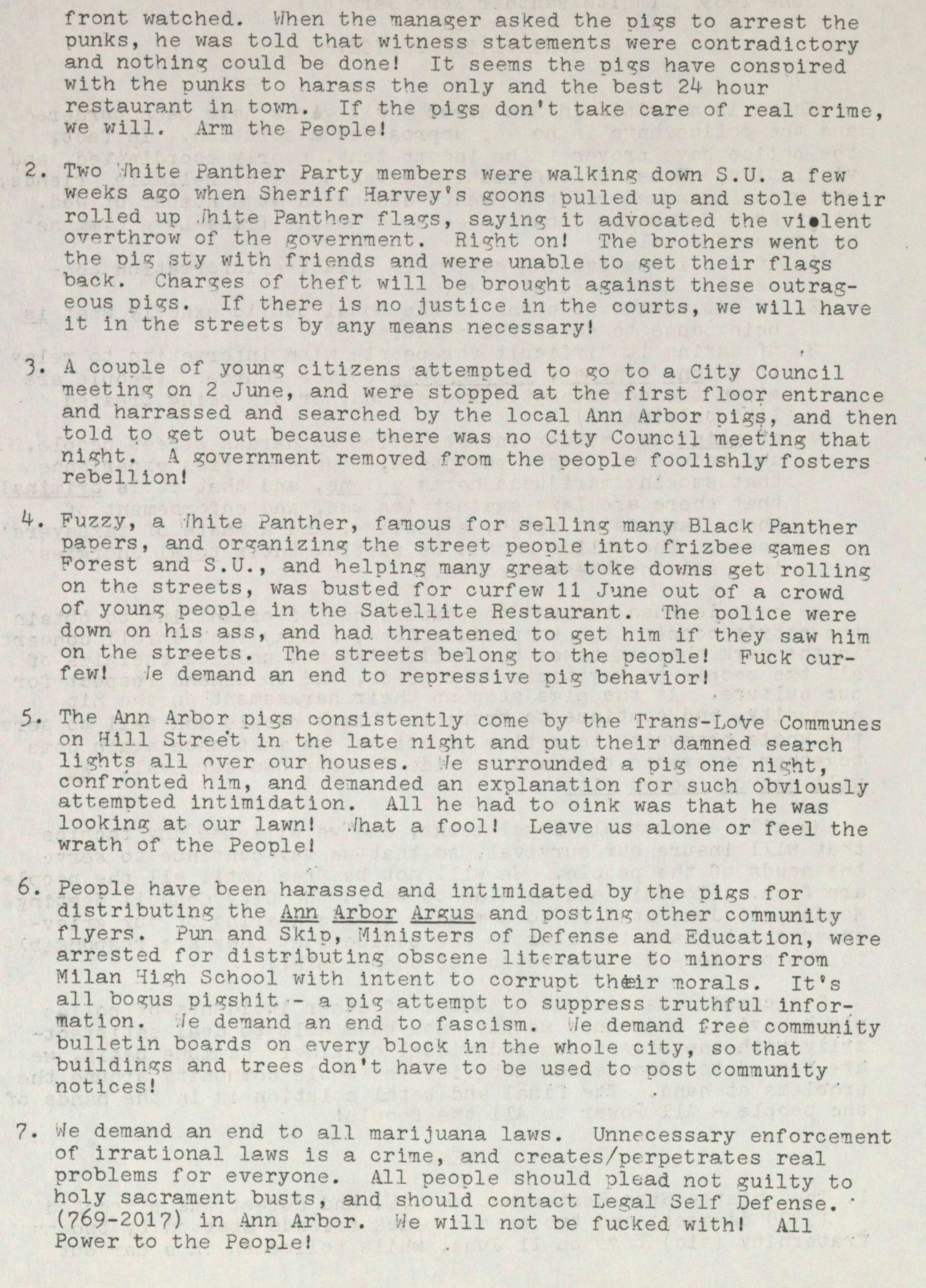 1. The Whistle Stop Restaurant on S.U. and Forest was ransacked ($300 damages) and two of our black friends spat on by two punk fraternity (sic) boys on 11 June, while policemen in a car out front watched. When the manager asked the pigs to arrest the punks, he was told that witness statements were contradictory and nothing could be done! It seem the pigs have conspired with the punks to harass the only and best 24 hour restaurant in town. If the pigs don't take care of real crime, we will. Arm the people!

2. Two White Panther Party members were walking down S.U. a few weeks ago when Sheriff Harvey's goons pulled up and stole their rolled up White Panther flags, saying it advocated the violent overthrow of the government. Right on! The brothers went to the pig sty with friends and were unable to get their flags back. Charges of theft will be brought against these outrageous pigs. If there is no justice in the courts, we will have it in the streets by any means necessary!

3. A couple of young citizens attempted to go to a City Council meeting on 2 June, and were stopped at the first floor entrance and harassed and searched by the local Ann Arbor pigs, and then told to get out of there because there was no City Council meeting that night. A government removed from the people foolishly fosters rebellion!

4. Fuzzy, a White Panther, famous for selling many Black Panther papers, and organizing the street people into frisbee games on Forest and S.U., and helping many great toke downs get rolling on the streets, was busted for curfew 11 June out of a crowd of young people in the Satellite Restaurant. The police were down on his ass, and had threatened to get him if they saw him on the streets. The streets belong to the people! Fuck curfew! We demand an end repressive pig behavior!

5. The Ann Arbor pigs consistently come by the Trans-Love Communes on Hill Street in the late night and put their damned search lights all over our houses. We surrounded a pig on night, confronted him, and demanded an explanation for such obviously attempted intimidation. All he  had to oink was that he was looking at our lawn! What a fool! Leave us alone or feel the wrath of the people!

6. People have been harassed and intimidated by the pigs for distributing the Ann Arbor Argus and posting other community flyers. Pun and Skip, Ministers of Defense and Education, were arrested for distributing obscene literature to minors from Milan High School with the intent to corrupt their morals. It's all bogus pigs shit - a pig attempt to suppress truthful information. We demand an end to racism. We demand free community bulletin boards on every block in the whole city, so that buildings and trees don't have to be used to post community notices!

7. We demand an end to all marijuana laws. Unnecessary enforcement of irrational laws is a crime, and creates/perpetuates real problems for everyone. All people should plead not guilty to holy sacrament busts, and should contact Legal Self Defense. (769-2017) in Ann Arbor. We will not be fucked with! All Power to the People!