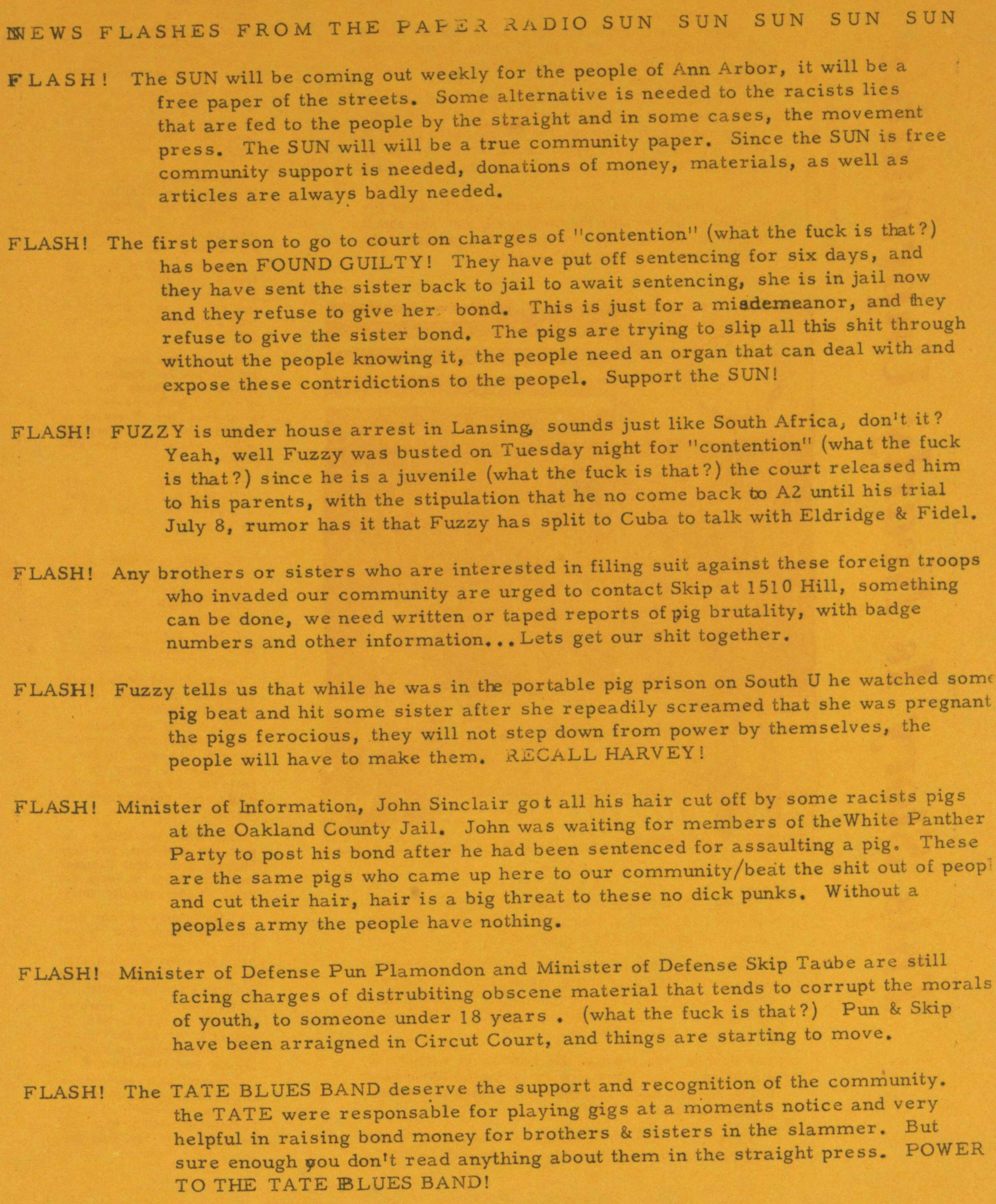 FLASH! The SUN will be coming out weekly for the people of Ann Arbor, it will be a free paper of the streets. Some alternative is needed to the racists lies that are fed to the people by the straight and in some cases, the movement press. The SUN will will be a true community paper. Since the SUN is free community support is needed, donations of money, materials, as well as articles are always badly needed.

FLASH! The first person to go to court on charges of "contention" (what the fuck is that?) has been FOUND GUILTY! They have put off sentencing for six days, and they have sent the sister back to jail to await sentencing, she is in jail now and they refuse to give her bond. This is just for a misdemeanor and they refuse to give the sister bond. The pigs are trying to slip all this shit through without the people knowing it, the people need an organ that can deal with and expose these contridictions to the peopel. Support the SUN!

FLASH! FUZZY is under house arrest in Lansing, sounds just like South Africa, don't it? Yeah, well Fuzzy was busted on Tuesday night for "contention" (what the fuck is that?) since he is a juvenile (what the fuck is that?) the court released him to his parents, with the stipulation that he no come back to A2 until his trial July 8, rumor has it that Fuzzy has split to Cuba to talk with Eldridge & Fidel.

FLASH! Any brothers or sisters who are interested in filing suit against these foreign troops who invaded our community are urged to contact Skip at 1510 Hill, something can be done, we need written or taped reports of pig brutality, with badge numbers and other information. . . Lets get our shit together.

FLASH! Fuzzy tells us that while he was in the portable pig prison on South U he watched some pig beat and hit some sister after she repeadily screamed that she was pregnant the pigs ferocious, they will not step down from power by themselves, the people will have to make them. RECALL HARVEY!

FLASH! Minister of Information, John Sinclair got all his hair cut off by some racists pigs at the Oakland County Jail. John was waiting for members of the White Panther Party to post his bond after he had been sentenced for assaulting a pig. These are the same pigs who came up here to our community/beat the shit out of people and cut their hair, hair is a big threat to these no dick punks. Without a peoples army the people have nothing.

FLASH! Minister of Defense Pun Plamondon and Minister of Defense Skip Taube are still facing charges of distrubiting obscene material that tends to corrupt the morals of youth, to someone under 18 years. (what the fuck is that?) Pun & Skip have been arraigned in Circut Court, and things are starting to move.

FLASH! The TATE BLUES BAND deserve the support and recognition of the community. the TATE were responsable for playing gigs at a moments notice and very helpful in raising bond money for brothers & sisters in the slammer. But sure enough you don't read anything about them in the straight press. POWER TO THE TATE BLUES BAND!