This Story Is Nearly Unprintable 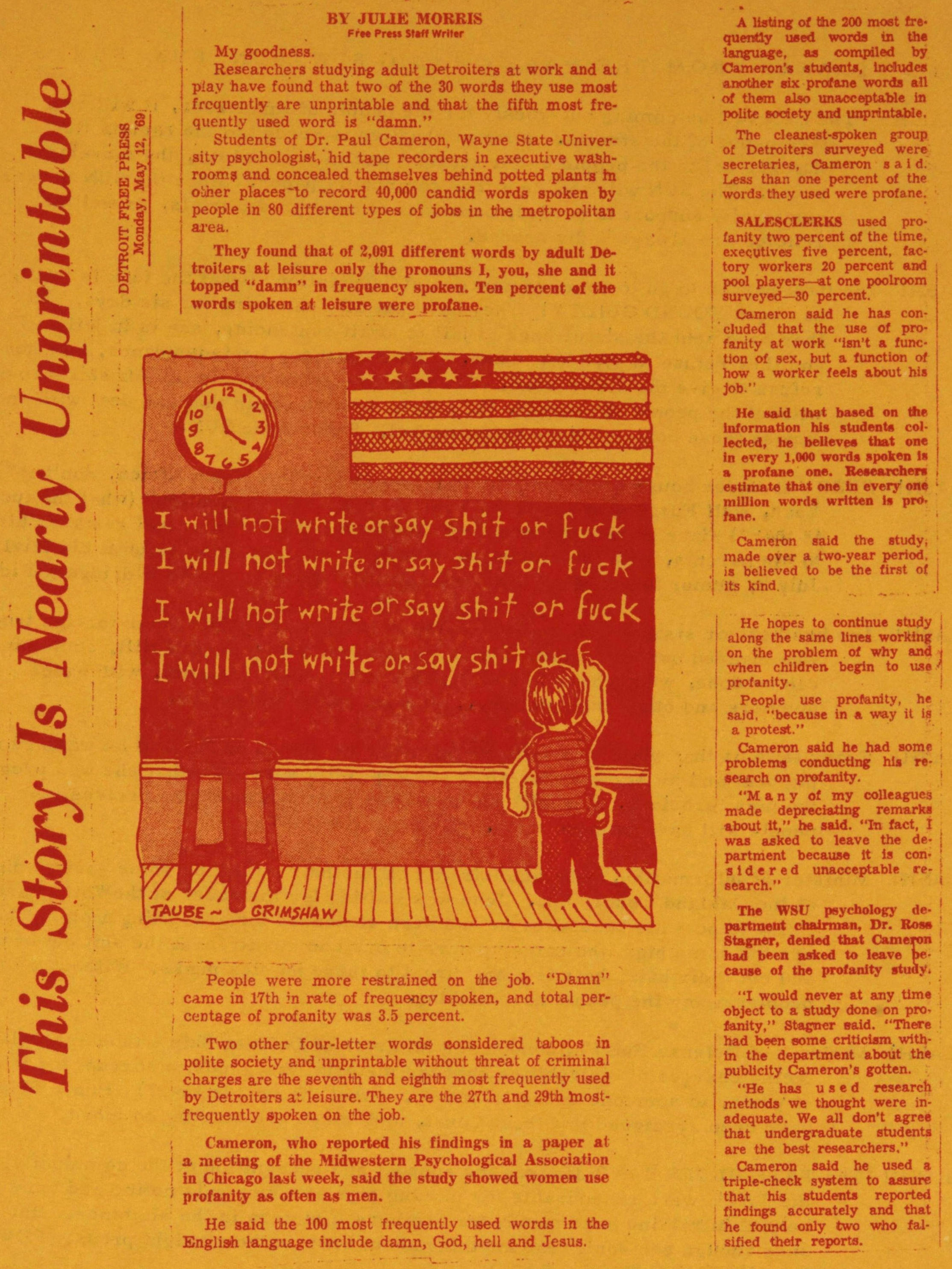 This Story Is Nearly Unprintable

Researchers studying adult Detroiters at work and at play have found that two of the 30 words they use most frequently are unprintable and that the fifth most frequently used word is "damn."

Students of Dr. Paul Cameron, Wayne State University psychologist, hid tape recorders in executive washrooms and concealed themselves behind potted plants in other places to record 40,000 candid words spoken by people in 80 different types of jobs in the metropolitan area.

They found that of 2,091 different words by adult Detroiters at leisure only the pronouns I, you, she and it topped "damn" in frequency spoken. Ten percent of the words spoken at leisure were profane.

People were more restrained on the job. "Damn" came in 17th in rate of frequency spoken, and total percentage of profanity was 3.5 percent.

Two other four-letter word considered taboos in polite society and unprintable without threat of criminal charges are the seventh and eighth most frequently used by Detroiters at leisure. They are the 27th and 29th most frequently spoken on the job.

Cameron, who reported his findings in a paper at a meeting of the Midwestern Psychological Association in Chicago last week, said the study showed women use profanity as often as men.

He said the 100 most frequently used words in the Engliah language include damn, God, hell and Jesus.

A listing of the 200 most frequently used words in the language, as compiled by Cameron's student, includes another six profane words all of them also unacceptable in polite society and unprintable.

The cleanest-spoken group of Detroiters surveyed were secretaries, Cameron said. Less than one percent of the words they used were profane

He said that based on the information his students collected, he believes that one in every 1,000 words spoken is a profane one. Researcher estímate that one In every one milllon words written is profane.

Cameron said the study, made over a two-year period, is believed to be the first of its kind.

He hopes to continue study along the same lines working on the problem of why and when children begin to use profanity.

People use profanity, he said, "because in a way it is a protest."

Cameron said he had some problems conducting his research on profanity.

"Many of my colleagues made depreciating remarks about it," he said. "In fact, I was asked to leave the department because it is considered unacceptable research."

The WSU psychology department chairman. Dr. Ross Stagner, denied that Cameron had been asked to leave because of the profanity study.

"I would never at any time object to a study done on profanity," Stagner said. "There had been some criticism within the department about the publicity Cameron's gotten.

"He has used research methods we thought were inadequate. We all don't agree that undergraduate students are the best researchers."

Cameron said he used a triple-check system to assure that his students reported findings accurately and that he found only two who falsified their reports.