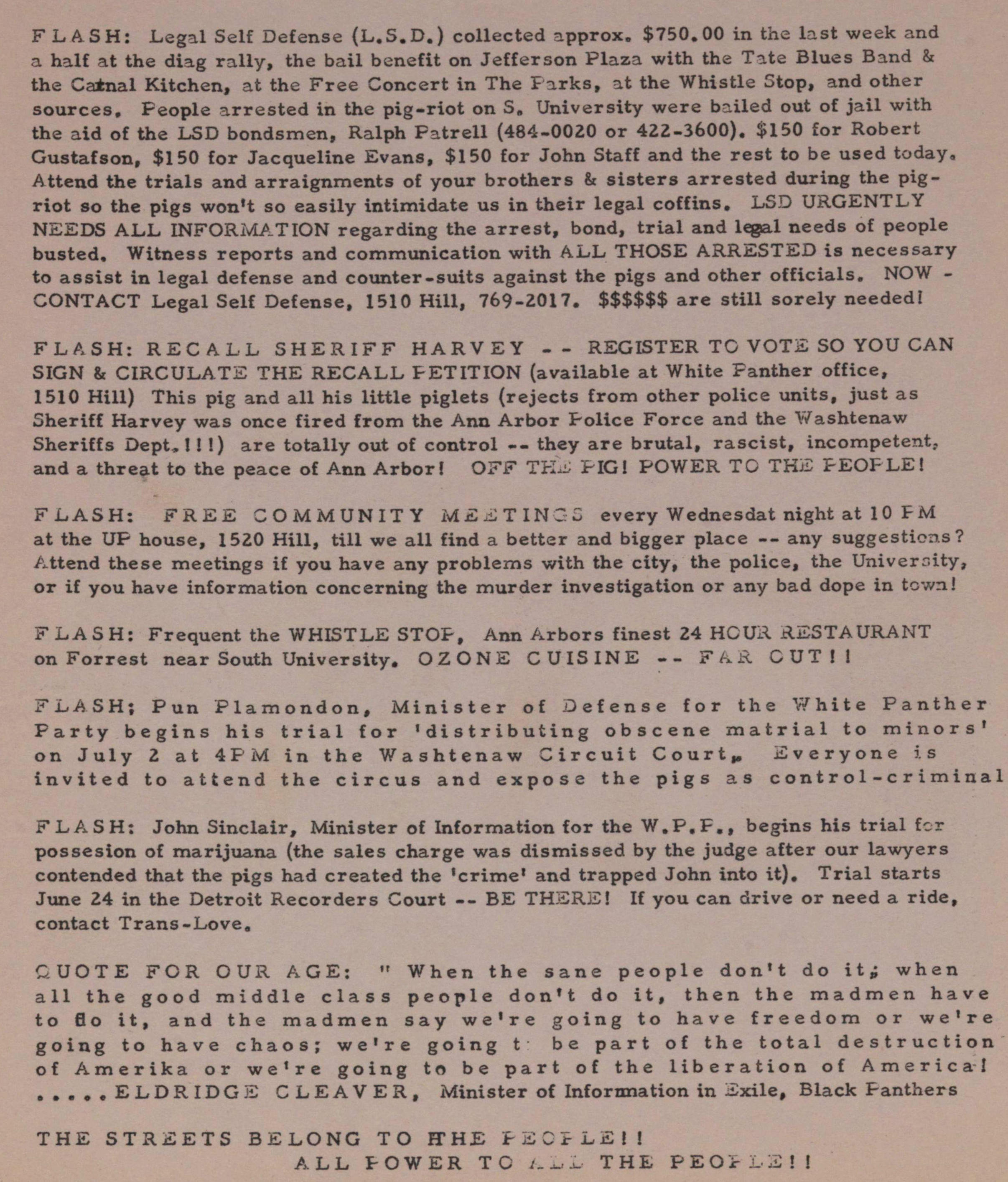 FLASH: Legal Self Defense (L.S.D.) collected approx. $750.00 in the last week and a half at the diag rally, the bail benefit on Jefferson Plaza with the Tate Blues Band & the Carnal Kitchen, at the Free Concert in The Parks, at the Whistle Stop, and other sources. People arrested in the pig-riot on S. University were bailed out of jail with the aid of the LSD bondsmen, Ralph Fatrell (484-0020 or 422-3600). $150 for Robert Gustafson, $150 for Jacqueline Evans, $150 for John Staff and the rest to be used today. Attend the trials and arraignments of your brothers & sisters arrested during the pig-riot so the pigs won't so easily intimidate us in their legal coffins. LSD URGENTLY NEEDS ALL INFORMATION regarding the arrest, bond, trial and legal needs of people busted. Witness reports and communication with ALL THOSE ARRESTED is necessary to assist in legal defense and counter-suits against the pigs and other officials. NOW - CONTACT Legal Self Defense, 1510 Hill, 769-2017. $$$$$$ are still sorely needed!

FLASH: RECALL SHERIFF HARVEY -- REGISTER TO VOTE SO YOU CAN SIGN & CIRCULATE THE RECALL PETITION (available at White Panther office, 1510 Hill) This pig and all his little piglets (rejects from other police units, just as Sheriff Harvey was once fired from the Ann Arbor Police Force and the Washtenaw Sheriffs Dept.! ! !) are totally out of control - they are brutal, rascist, incompetent, and a threat to the peace of Ann Arbor! OFF THE PIG! POWER TO THE PEOPLEI

FLASH: FREE COMMUNITY MEETINGS every Wednesdayt night at 10 PM at the UP house, 1520 Hill, till we all find a better and bigger place - any suggestions? Attend these meetings if you have any problems with the city, the police, the University, or if you have information concerning the murder investigation or any bad dope in town!

FLASH: Pun Plamondon, Minister of Defense for the White Panther Party begins his trial for 'distributing obscene matrial to minors' on July 2 at 4PM in the Washtenaw Circuit Court. Everyone is invited to attend the circus and expose the pigs as control-criminals.

FLASH: John Sinclair, Minister of Information for the W.P.P., begins his trial for possesion of marijuana (the sales charge was dismissed by the judge after our lawyers contended that the pigs had created the 'crime' and trapped John into it). Trial starts June 24 in the Detroit Recorders Court - BE THERE! If you can drive or need a ride, contact Trans-Love.

THE STREETS BELONG TO THE PEOPLE!!

ALL POWER TO ALL THE PEOPLE!!