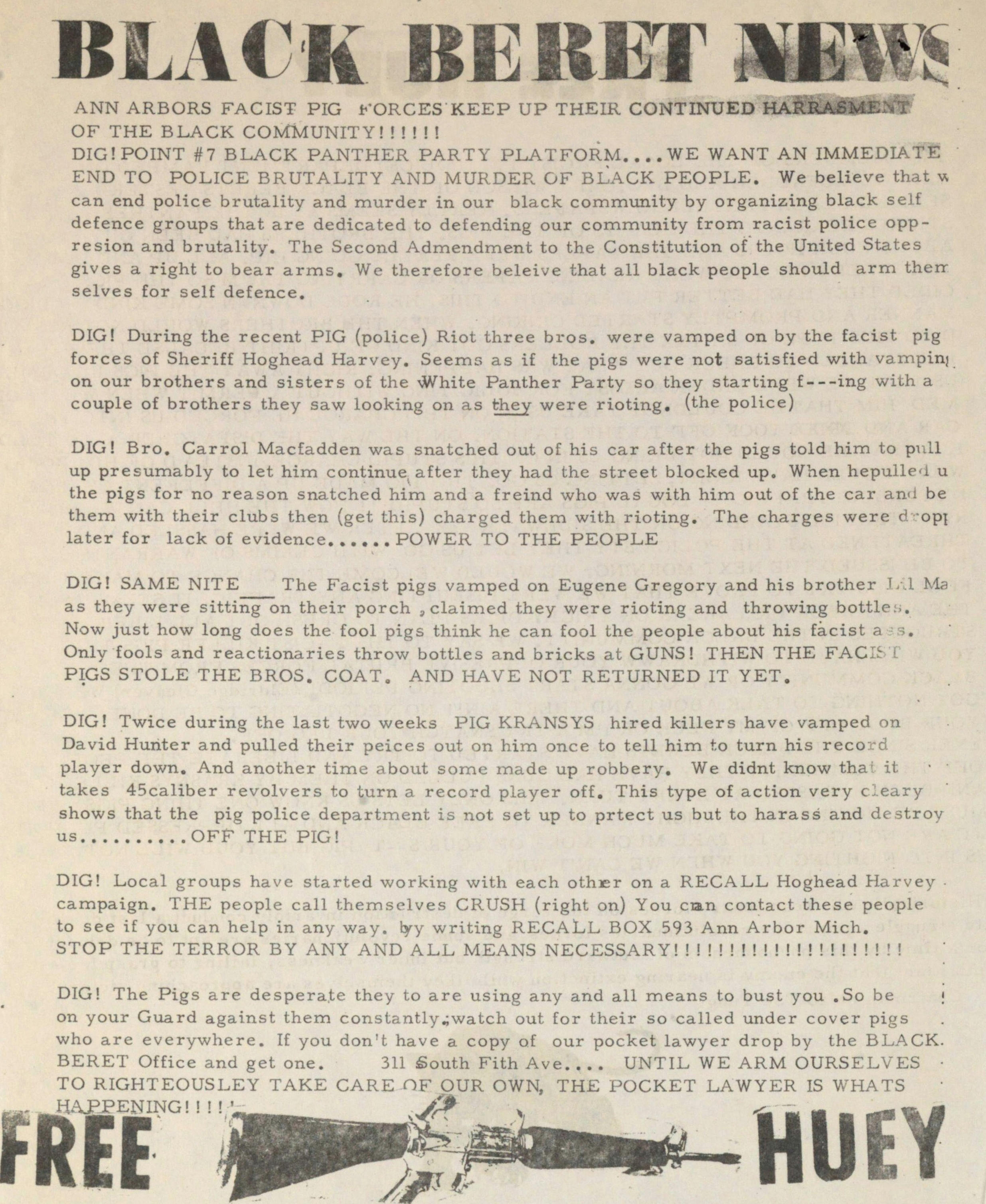 DIG! POINT #7 BLACK PANTHER PARTY PLATFORM WE WANT AN IMMEDIATE END TO POLICE BRUTALITY AND MURDER OF BLACK PEOPLE. We believe that we can end police brutality and murder in our black community by organizing black self defence groups that are dedicated to defending our community from racist police oppression and brutality. The Second Amendment to the Constitution of the United States gives a right to bear arms. We therefore believe that all black people should arm themselves for self defence.

DIG! During the recent PIG (police) Riot three bros. were vamped on by the fascist pig forces of Sheriff Hoghead Harvey. Seems as if the pigs were not satisfied with vamping on our brothers and sisters of the White Panther Party so they starting f---ing with a couple of brothers they saw looking on as they were rioting. (the police)

DIG! Bro. Carrol Macfadden was snatched out of his car after the pigs told him to pull up presumably to let him continue after they had the street blocked up. When he pulled up the pigs for no reason snatched him and a friend who was with him out of the car and beat them with their clubs then (get this) charged them with rioting. The charges were dropped later for lack of evidence..... POWER TO THE PEOPLE

DIG! SAME NITE___ The Fascist pigs vamped on Eugene Gregory and his brother Lil Ma as they were sitting on their porch, claimed they were rioting and throwing bottles. Now just how long does the fool pigs think he can fool the people about his fascist ass. Only fools and reactionaries throw bottles and bricks at GUNS! THEN THE FASCIST PIGS STOLE THE BROS. COAT. AND HAVE NOT RETURNED IT YET.

DIG! Twice during the last two weeks PIG KRANSY'S hired killers have vamped on David Hunter and pulled their pieces out on him once to tell him to turn his record player down. And another time about some made up robbery. We didn't know that it takes 45caliber revolvers to turn a record player off. This type of action very clearly shows that the pig police department is not set up to protect us but to harass and destroy us.............. OFF THE PIG!

DIG! Local groups have started working with each other on a RECALL Hoghead Harvey campaign. THE people call themselves CRUSH (right on) You can contact these people to see if you can help in any way. by writing RECALL BOX 593 Ann Arbor Mich. STOP THE TERROR BY ANY AND ALL MEANS NECESSARY! !!!!!!!!!!!!!!!!!!!!

DIG! The Pigs are desperate they are using any and all means to bust you .So be on your Guard against them- constantly watch out for their so called under cover pigs who are everywhere. If you don't have a copy of our pocket lawyer drop by the BLACK. BERET Office and get one. 311 South Fifth Ave.... UNTIL WE ARM OURSELVES TO RIGHTEOUSLEY TAKE CARE OF OUR OWN, THE POCKET LAWYER IS WHAT'S HAPPENING!!!!!!!!!!