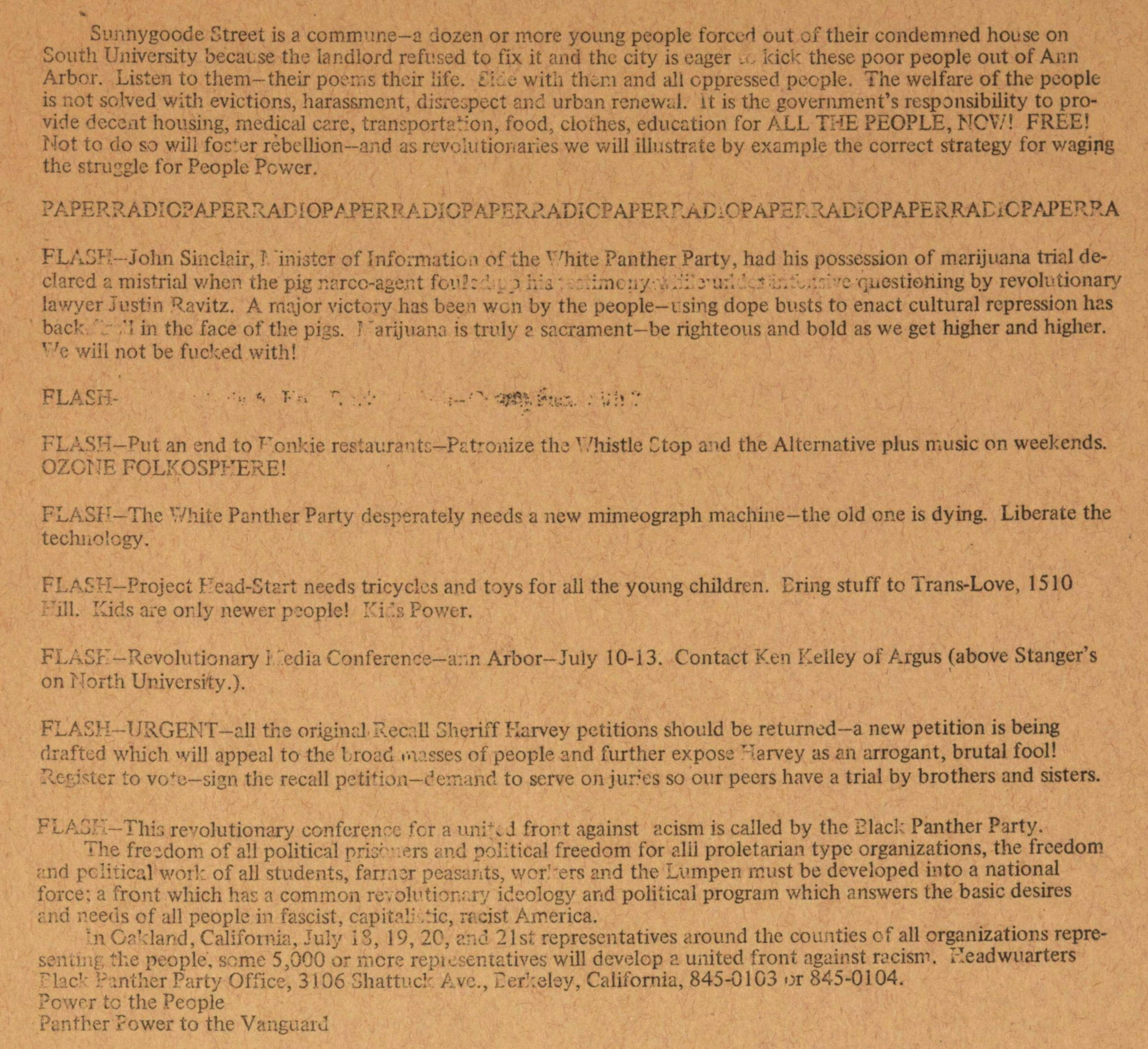 Sunnygoode Street is a commune-a dozen or more young people forced out of their condemned house on South University because the landlord refused to fix it and the city is eager to kick these poor people out of Ann Arbor. Listen to their poems-their life. Side with them and all oppressed people. The welfare of the people is not solved with evictions, harassment, disrespect and urban renewal. It is the government's responsibility to provide decent housing, medical care, transportation, food, clothes, education for ALL THE PEOPLE, NOW! FREE! Not to do so will foster rebellion- and as revolutionaries we will illustrate by example the correct strategy for waging the struggle for People Power.

FLASH- John Sinclair, minister of Information of the White Panther Party, had his possession of marijuana trial declared a mistrial when the pig narco-agent fouled up his testimony while during questioning by revolutionary lawyer Justin Ravitz. A major victory has been won by the people-using dope busts to enact cultural repression has backed up all in the face of the pigs. Marijuana is truly a sacrament-be righteous and bold as we get higher and higher. We will not be fucked with!

FLASH Put an end to Honkie restaurants- Patronize the whistle Stop and the Alternative plus music on weekends. OZONE FOLKOSPKERE!

FLASH- The White Panther Party desperately needs a new mimeograph machine- the old one is dying. Liberate the technology.

FLASH-URGENT-all the original Recall Sheriff Harvey petitions should be returned-a new petition is being drafted which will appeal to the broad masses of people and further expose Harvey as an arrogant, brutal fool! Register to vote-sign the recall petition- demand to serve on juries so our peers have a trial by brothers and sisters.

FLASH-This revolutionary conference for a united front against racism is called by the Black Panther Party. The freedom of all political prisoners and political freedom for all proletarian type organizations, the freedom and political work of all students, farmer peasants, workers and the Lumpen must be developed into a national force; a front which has a common revolutionary ideology and political program which answers the basic desires; needs of all people in fascist, capitalistic, racist America.

In Oakland , California, July 18, 19, 20, and 21st representatives around the counties of all organizations representing the people. Some 5,000 or more representatives will develop a united front against racism. Headquarters Black Panther Party Office, 3106 Shattuck Ave, Berkeley, California, 845-0103 or 845-0104.

Power to the  People