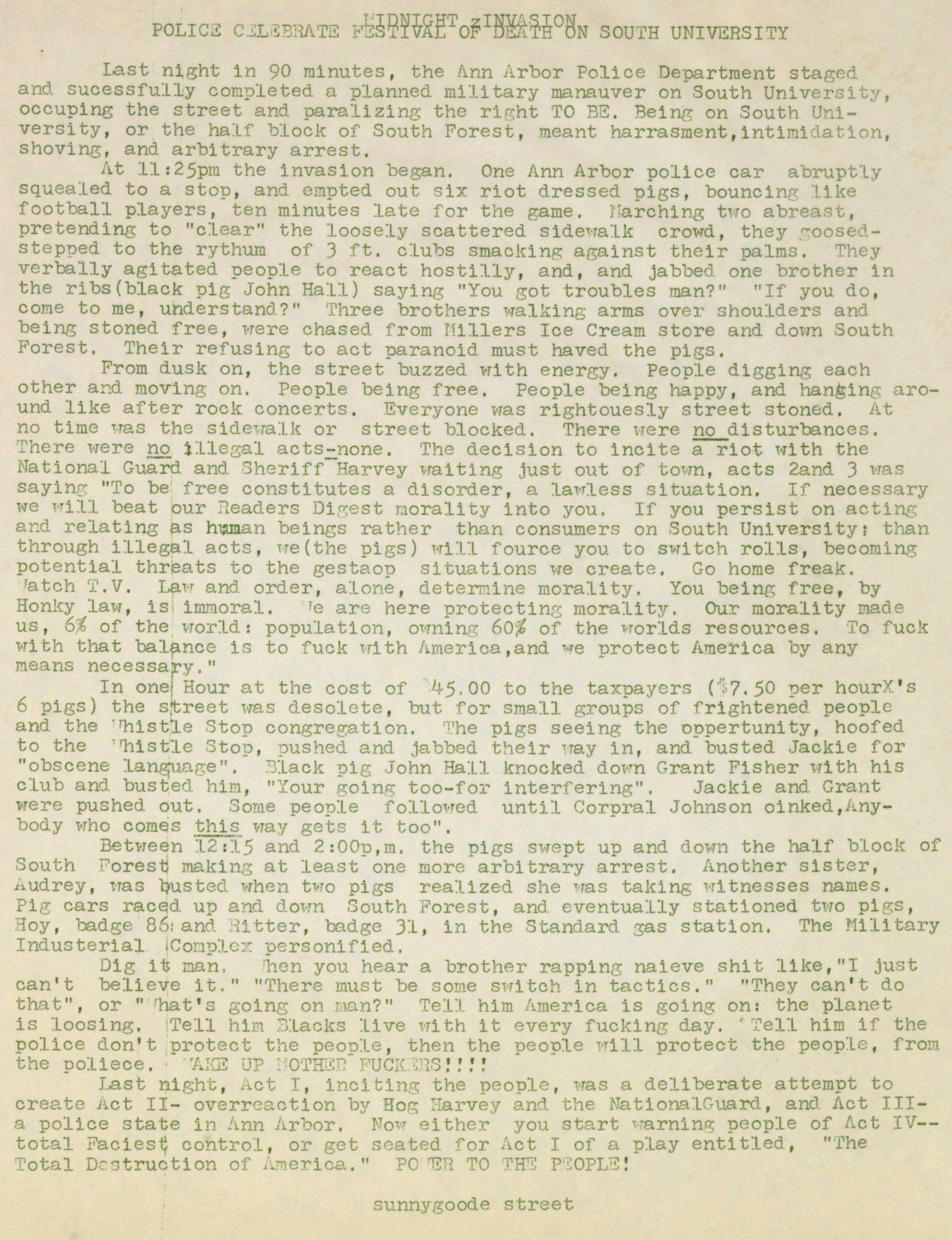 Last night in 90 minutes, the Ann Arbor Police Department staged and sucessfully completed a planned military manauver on South University, occuping the street and paralizing the right TO BE. Being on South University, or the half block of South Forest, meant harrasment, intimidation, shoving, and arbitrary arrest.

At 11:25pm the invasion began. One Ann Arbor police car abruptly squealed to a stop, and empted out six riot dressed pigs, bouncing like football players, ten minutes late for the game. Marching two abreast, pretending to "clear" the loosely scattered sidewalk crowd, they goosed-stepped to the rythum of 3 ft. clubs smacking against their palms. They verbally agitated people to react hostilly, and, and jabbed one brother in the ribs(black pig John Hall) saying "You got troubles man?" "If you do, come to me, understand?" Three brothers walking arms over shoulders and being stoned free, were chased from Millers Ice Cream store and down South Forest. Their refusing to act paranoid must haved the pigs.

From dusk on, the street buzzed with energy. People digging each other and moving on. People being free. People being happy, and hanging around like after rock concerts. Everyone was rightouesly street stoned. At no time was the sidewalk or street blocked. There were no disturbances. There were no illegal acts-none. The decision to incite a riot with the National Guard and Sheriff Harvey waiting just out of town, acts 2and 3 was saying "To be free constitutes a disorder, a lawless situation. If necessary we will beat our Readers Digest morality into you. If you persist on acting and relating as human beings rather than consumers on South University; than through illegal acts, we(the pigs) will fource you to switch rolls, becoming potential threats to the gestaop situations we croate. Go home freak. Watch T.V. Law and order, alone, determine morality. You being free, by Honky law, is immoral. We are here protecting morality. Our morality made us, 6% of the world population, owning 60% of the worlds resources. To fuck with that balance is to fuck with America, and we protect America by any means necessary."

In one Hour at the cost of $45.00 to the taxpayers ($7.50 Pe hourX's 6 pigs) the street was desolete, but for small groups of frightened people and the Whistle Stop congregation. The pigs seeing the oppertunity, hoofed to the Whistle Stop, pushed and jabbed their way in, and busted Jackie for "obscene language". Black pig John Hall knocked down Grant Fisher with his club and busted him, "Your going too-for interfering". Jackie and Grant were pushed out. Some people followed until Corpral Johnson oinked,Anybody who comes this way gets it too".

Between 12:15 and 2:00p,m. the pigs swept up and down the half block of South Forest making at least one more arbitrary arrest. Another sister, Audrey, was busted when two pigs realized she was taking witnesses names. Pig cars raced up and down South Forest, and eventually stationed two pigs, Hoy, badge 86 and Ritter, badge 31, in the Standard gas station. The Military Industerial Complex personified.

Dig it man, When you hear a brother rapping naieve shit like,"I just can't believe it," "There must be some switch in tactics." "They can't do that", or "What's going on man?" Tell him America is going on: the planet is loosing. Tell him Blacks live with it every fucking day. ' Tell him if the police don't protect the people, then the people will protect the people, from the police. WAKE UP MOTHER FUCKERS!!!!

Last night, Act I, inciting the people, was a deliberate attempt to create Act II- overreaction by Hog Harvey and the NationalGuard, and Act III- a police state in Ann Arbor. Now either you start warning people of Act IV-total Faciest control, or get seated for Act I of a play entitled, "The Total Destruction of America." POWER TO THE PEOPLE