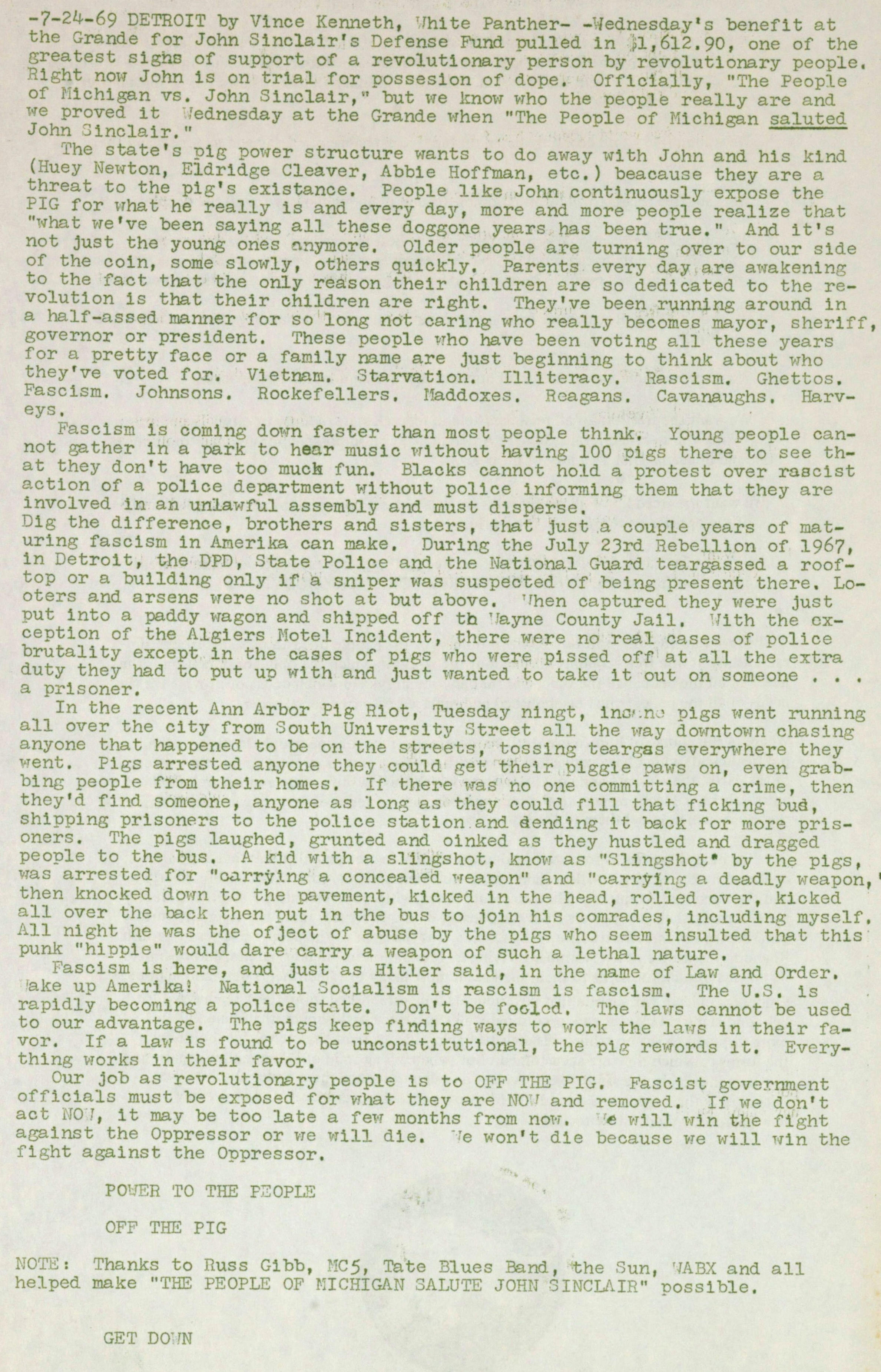 -7-24-69 DETROIT by Vince Kenneth, White Panther - -Wednesday's benefit at the Grande for John Sinclair 's Defense Pund pulled in $1,612.90, one of the greatest signs of support of a revolutionary person by revolutionary people. Rlght now John is on trial for possesion of dope. Offlcially, "The People of Michigan vs. John Sinclair," but v-re know vrho the people really are and we proved it Wednesday at the Grande when "The People of Michigan saluted John Sinclair."

The state's pig power structure wants to do away wlth John and his kind (Huey Newton, Eldridge Cleaver, Abbie Hoffman, etc.) beacause they are a threat to the pig's existance. People like John continuously exposé the PIG for what he really is and every day, more and more people realize that what we've been saying all these doggone years has been true." And it's not just the young ones anymore. Older people are turning over to our side of the coin, some slowly, others quickly. Parents every day are awakening to the fact that the only reason their children are so dedicated to the revolutlon is that their children are right. They've been running around in a half-assed manner for so long not caring who really becomes mayor, sheriff, governor or president. These people who have been voting all these years for a pretty face or a family name are just beginning to think about who they've voted for. Vietnam. Starvation. Illiteracy. Rascism. Ghettos. Fasclsm. Johnsons. Rockefellers. Maddoxes. Reagans. Cavanaughs. Harveys.

Fascism Is coming down faster than most people think. Young people cannot gather in a park to hear music without havlng 100 pigs there to see that they don't have too much fun. Blacks cannot hold a protest over rascist action of a police department without police informing them that they are involved in an unlawful assembly and must disperse.

Dig the difference, brothers and sisters, that just a couple years of maturing fascism in Amerika can make. During the July 23rd Rebellion of 1967, in Detroit, the DPD, State Police and the National Guard teargassed a rooftop or a building only if a sniper was suspected of being present there. Looters and arsens were no shot at but above. When captured they were just put into a paddy wagon and shipped off the Wayne County Jail. 7]Mith the exception of the Algiers Motel Incident, there were no real cases of police brutality except in the cases of pigs who were pissed off at all the extra duty they had to put up with and just wanted to take it out on someone . . . a prisoner.

In the recent Ann Arbor Pig Riot, Tuesday night, insane pigs went running all over the city from South University Street all the way downtown chasing anyone that happened to be on the streets, tossing teargas everywhere they went. Figs arrested anyone they could get their piggie paws on, even grabbing people from their homes. If there was no one committing a crime, then they'd find someone, anyone as long as they could fill that ficking bus, shipping prisoners to the police station and sending it back for more prisoners. The pigs laughed, grunted and oinked as they hustled and dragged people to the bus. A kid with a slingshot, know as "Slingshot" by the pigs, was arrested for "carrying a concealed weapon" and "carrying a deadly weapon," then knocked down to the pavement, kicked in the head, rolled over, kicked all over the back then put in the bus to join his comrades, including myself. All night he was the object of abuse by the pigs who seem insulted that this punk "hippie" would dare carry a weapon of such a lethal nature.

Fascism is here, and just as Hitler said, in the name of Law and Order. Wake up Amerika! National Soclalism is rascism is fascism. The U.S. is rapidly becoming a police state. Don't be fooled. The laws cannot be used to our advantage. The pigs keep finding ways to work the laws in their favor. If a law is found to be unconstitutional, the pig rewords it. Everything works in their favor.