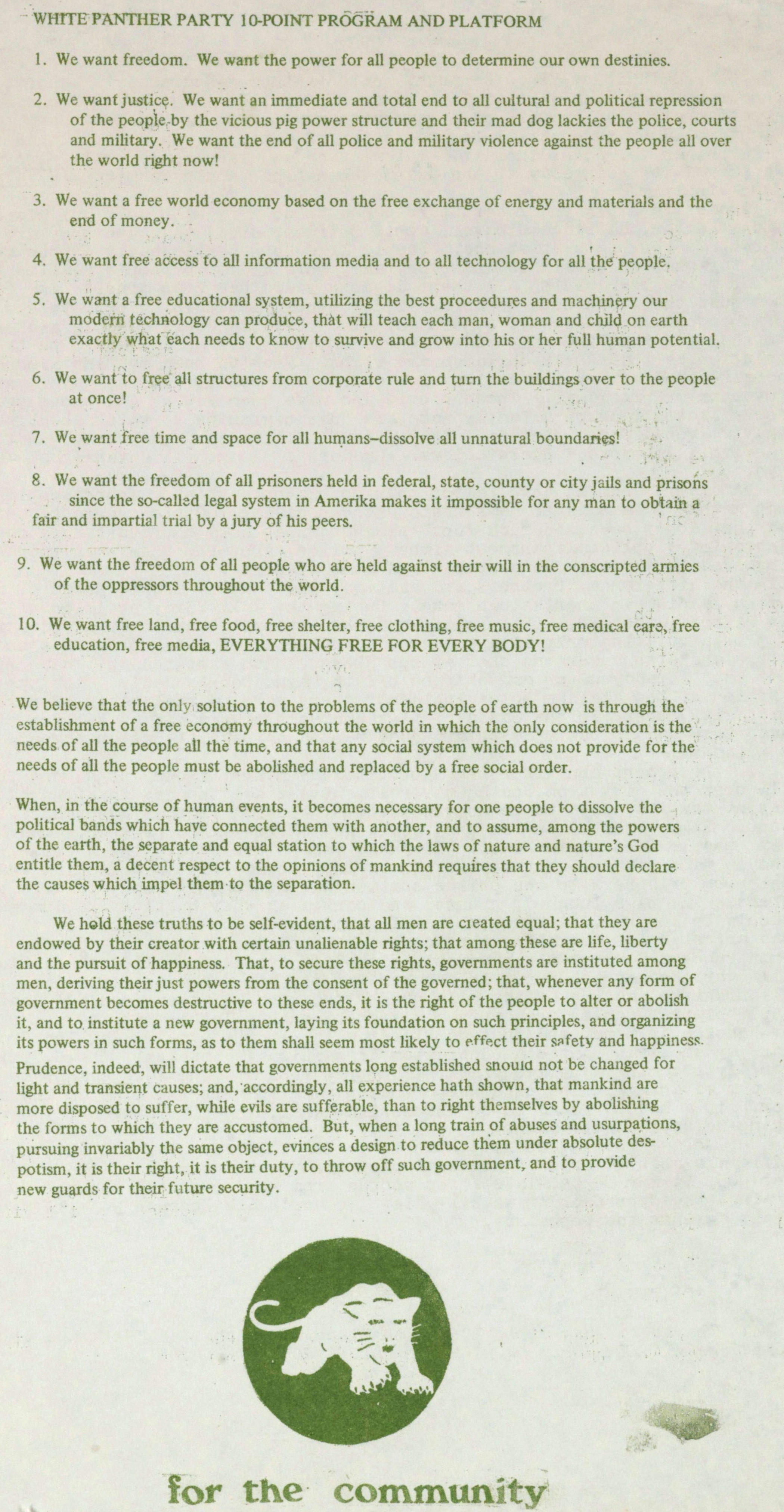 1 . We want freedom. We want the power for all people to determine our own destinies.

2. We want justice. We want an immediate and total end to all cultural and political repression of the people by the vicious pig power structure and their mad dog lackies the police, courts and military. We want the end of all police and military violence against the people all over the world right now!

3. We want a free world economy based on the free exchange of energy and materials and the end of money.

4. We want free access to all information media and to all technology for all the people.

5. We want a free educational system, utilizing the best proceedures and machinery our modern technology can produce, thát will teach each man, woman and child on earth exactly what each needs to know to survive and grow into his or her full human potential.

6. We want to free all structures from corporate rule and turn the buildings over to the people at once!

7. We want free time and space for all humans-dissolve all unnatural boundaries!

8. We want the freedom of all prisoners held in federal, state, county or city jails and prisons since the so-called legal system in Amerika makes it impossible for any man to obtain a fair and impartial trial by a jury of his peers.

9. We want the freedom of all people who are held against their will in the conscripted armies of the oppressors throughout the world.

When, in the course of human events, it becomes necessary for one people to dissolve the political bands which have connected them with another, and to assume, among the powers of the earth, the separate and equal station to which the laws of nature and nature's God entitle them, a decent respect to the opinions of mankind requires that they should declare the causes which impel them to the separation.

We hold these truths to be self-evident, that all men are created equal; that they are endowed by their creator with certain unalienable rights; that among these are life, liberty and the pursuit of happiness. That, to secure these rights, governments are instituted among men, deriving their just powers from the consent of the governed; that, whenever any form of government becomes destructive to these ends, it is the right of the people to alter or abolish it, and to institute a new government, laying its foundation on such principles, and organizing its powers in such forms, as to them shall seem most likely to effect their safety and happiness.

Prudence, indeed, will dictate that governments long established should not be changed for light and transient causes; and, accordingly, all experience hath shown, that mankind are more disposed to suffer, while evils are sufferable, than to right themselves by abolishing the forms to which they are accustomed. But, when a long train of abuses and usurpations, pursuing invariably the same object, evinces a design to reduce them under absolute despotism, it is their right, it is their duty, to throw off such government, and to provide new guards for their future security.