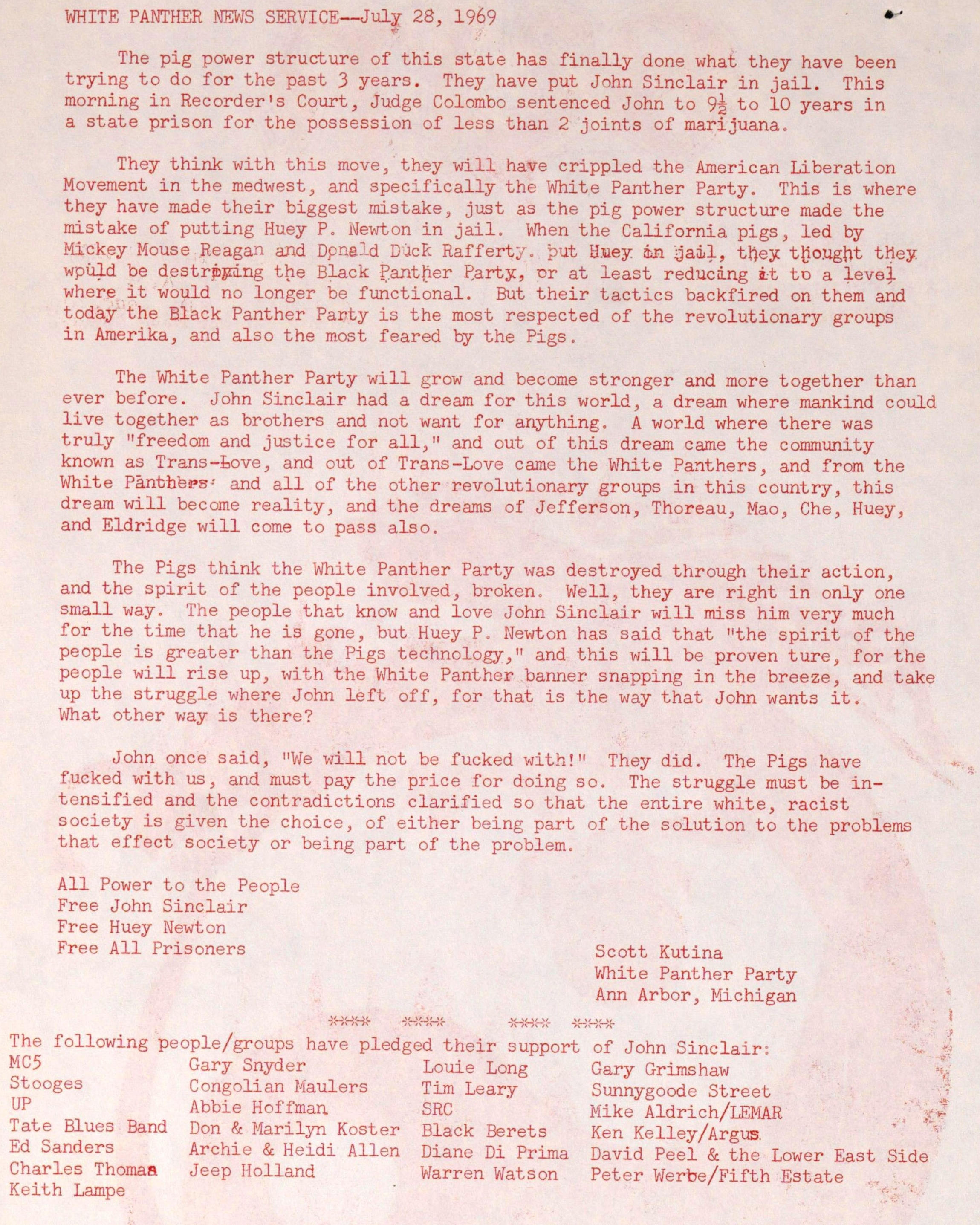 The pig power structure of this state has finally done what they have been trying to do for the past 3 years. They have put John Sinclair in jail. This morning in Recorder 's Court, Judge Colombo sentenced John to 9 1/2 to 10 years in a state prison for the possession of less than 2 joints of marijuana.

They think with this move, they will have crippled the American Liberation Movement in the medwest, and specifically the White Panther Party. This is where they have made their biggest mistake, just as the pig power structure made the mistake of putting Huey P. Newton in jail. When the California pigs, led by Mickey Mouse Reagan and Donald Duck Rafferty, put Huey in jail, they thought they would be destroying the Black Panther Party, or at least reducing it to a level where it would no longer be functional. But their tactics backfired on them and today the Black Panther Party is the most respected of the revolutionary groups in Amerika, and also the most feared by the Pigs.

The White Panther Party will grow and become stronger and more together than ever before. John Sinclair had a dream for this world, a dream where mankind could live together as brothers and not want for anything. A world where there was truly "freedom and justice for all," and out of this dream carne the community known as Trans-Love, and out of Trans-Love carne the White Panthers, and from the White Panthers and all of the other revolutionary groups in this country, this dream will become reality, and the dreams of Jefferson, Thoreau, Mao, Che, Huey, and Eldridge will come to pass also.

The Pigs think the White Panther Party was destroyed through their action, and the spirit of the people involved, broken. Well, they are right in only one small way. The people that know and love John Sinclair will miss him very much for the time that he is gone, but Huey P. Newton has said that "the spirit of the people is greater than the Pigs technology," and this will be proven ture, for the people will rise up, with the White Panther banner snapping in the breeze, and take up the struggle where John left off, for that is the way that John wants it. What other way is there?

The following peoplegroups have pledged their support of John Sinclair: